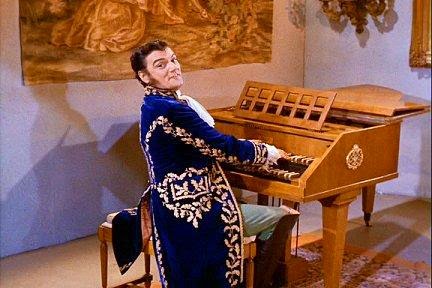 
The story begins with a new coffee Yeoman delivering the Styrofoam cups that apparently will remain in use for hundreds of years.  In another dazzling display of total disregard for safety most of the bridge crew leaves their uncovered coffee cups atop their slanted, electronics covered control panels for much of the episode. No wonder those consoles explode so easily. 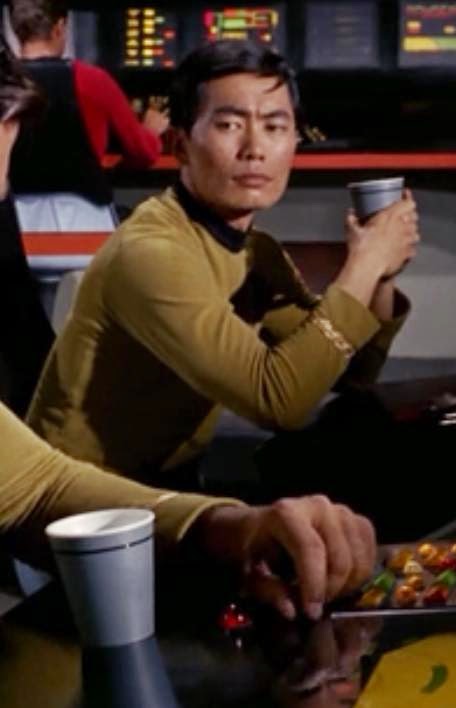 In our relationship watch, we can see Uhura grinning over her coffee as she observes Spock’s banter, though always maintaining professionalism when addressing him on the job.  She also watches over her Vulcan during the ending scene on the bridge, and answers his puzzlement with his all too human captain with a special smile.

The rest of the crew is as nationally diverse as the bridge crew, as we meet a token Frenchman and German.

Many comparisons have been made between Trelane and Q, and Peter David established the Squire was a young member of the Q Continuum in an expanded universe novel.

However, in attempting to view Star Trek in order from the beginning, with no outside influences, there’s another character that Trelane is similar to.

Let’s see: an apparent human with reality altering powers that is being watched over by non corporal superior beings.

Charlie Evans could also be described as a “very strange, small boy.”

Perhaps this is his next level of education from his “parents,” where the technology behind the mirror is helping him control and understand his powers to let him move beyond his body.

Kirk, once again, stares down and slaps an all powerful “war god.” 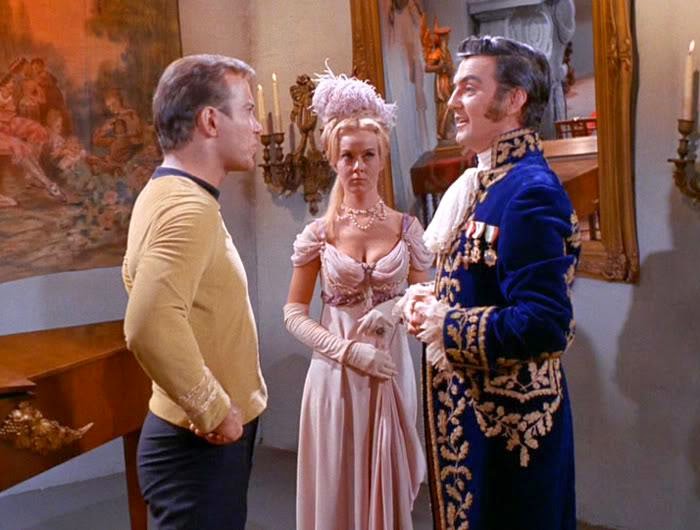 Y’know, the whole duel over “new coffee Yeoman” probably would have meant more if Janice was still around.

And once again, he’s “Captain’s Logging” in an environment with no recording devices; it’s somewhere between self affirmations and the crazy homeless guy talking to nobody.

In general the conflict with Trelane is a fun romp, which never manages to lose the seriousness of the threat to the ship and crew.

Kirk has absolutely no trouble being convincing about the fun of killing, because that’s the kind of guy he is.

Spock details the specifics of “Fascinating” and explains why it isn’t the catch all it is usually portrayed as, with specific comparison to “Interesting.”  Although he still visibly enjoys snarking in this story, which means he may be yanking McCoy’s chain.

Uhura is thrilled to learn to play a new instrument (Spock looks pleased for her as well) despite the fact that an unknown alien altered her brain to make it happen…
That’s an artist for ya.

Final thought:  Why not bring Trelane back in the rebooted Star Trek movies.  No one could truly recreate William Campbell’s role, but there’s another actor with that surname who would make an awesome Trelane: 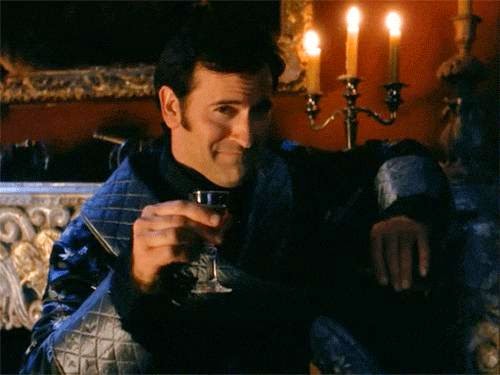 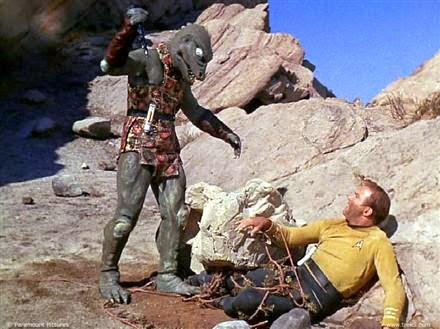 Oh, I have a warm spot in my heart for the Gorn.

When we started playing Starfleet Battles, there were three race assignments that required no thought, planning or discussion:

The guy who bought the game, a bigger Trek fan than I (yes, amazingly that is possible), was the Federation.

The guy who we knew would have no qualms about accidently placing his ships on a hex border to allow him to choose the most advantageous location for them was the Klingons.
(Klingon ship counters were black to make this cheat easier, indicating the game designers knew what type of individual would be drawn to this race.)

And I was given the nine foot lizard men with ships named after dinosaurs said to use “Push hard till it moves” engineering. 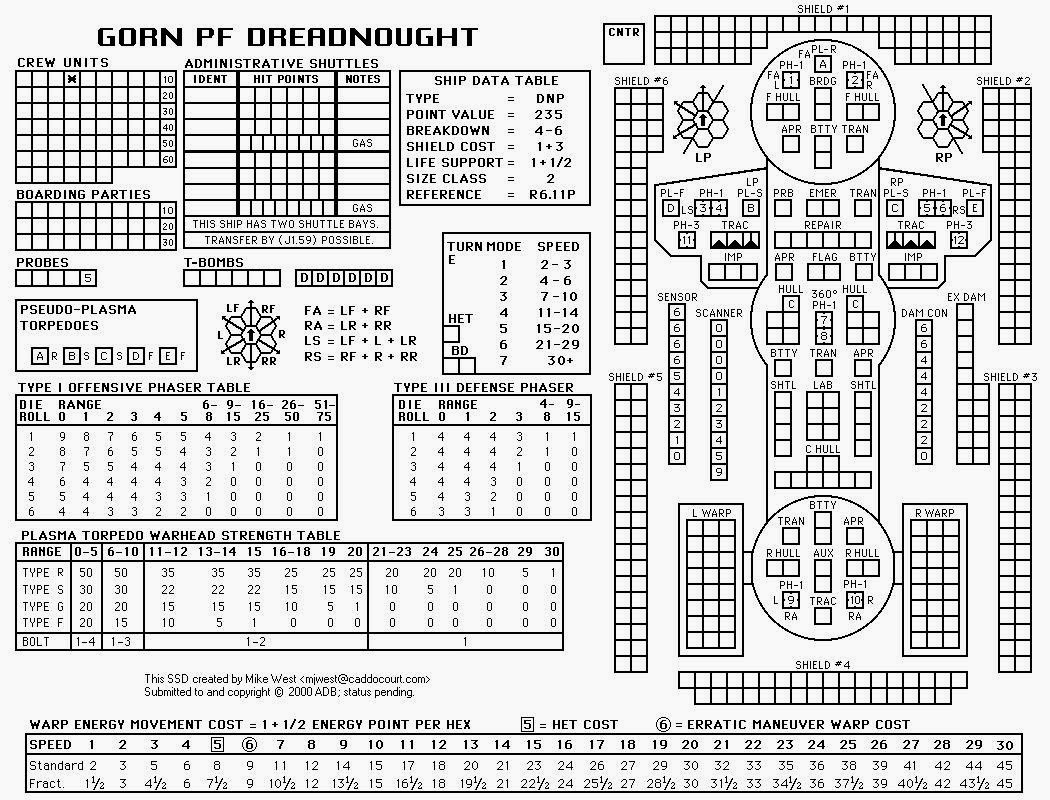 Let’s hear it for the Gorn Confederation!

We have a real Redshirt sighting in this one, as two of the three poor suckers who beam down to Cestus III with Kirk, Spock and McCoy get blown to smithereens by a “disruptor.”  Disruptor sounds much cooler than “energy mortar.” Plus I guess saying “mortar” would be too much foreshadowing for Kirk’s upcoming, on the fly science project. 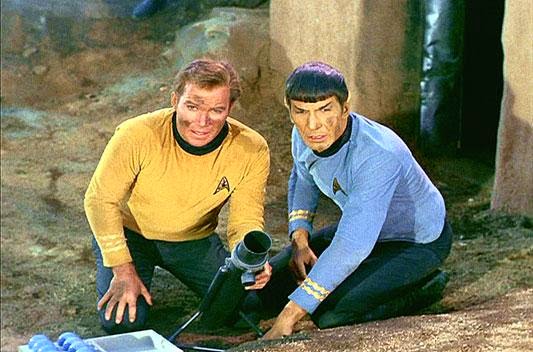 First appearance of Photon Torpedoes!
YAY! (Says the Starfleet Battles geek)
They’re readied below, but fired by Sulu, indicating some improvements in weapons control from “Balance of Terror.”

Also, first time establishing Warp 6 as maximum safe cruising speed.
No doubt set to let us know when things have gotten mega serious the multiple times the Enterprise exceeds it later on.

Nearly the first half of the episode is a straight military conflict.  Even a tricorder gets turned into an explosive weapon by the unseen enemy.

For context, that would be like someone sending a text to your tablet that suddenly made it capable of blowing up your house.

Kirk charges in assuming it’s an invasion. Even though Spock states it isn’t the only option, he agrees that the foe must be destroyed if possible.  In other words, Kirk has no time for regards for sentient life when his people have been attacked.

This is why, even though the writers don’t bludgeon the audience over the head with the messages, the lessons come off as stronger in the Original Series.  Seeing an overly military mind learn that violence and warfare is not always the answer holds much more power than when it’s figured out by pajama wearing space hippies.

OK, basically what Kirk really says is he won’t kill for others, only for himself alone, but, it’s something. 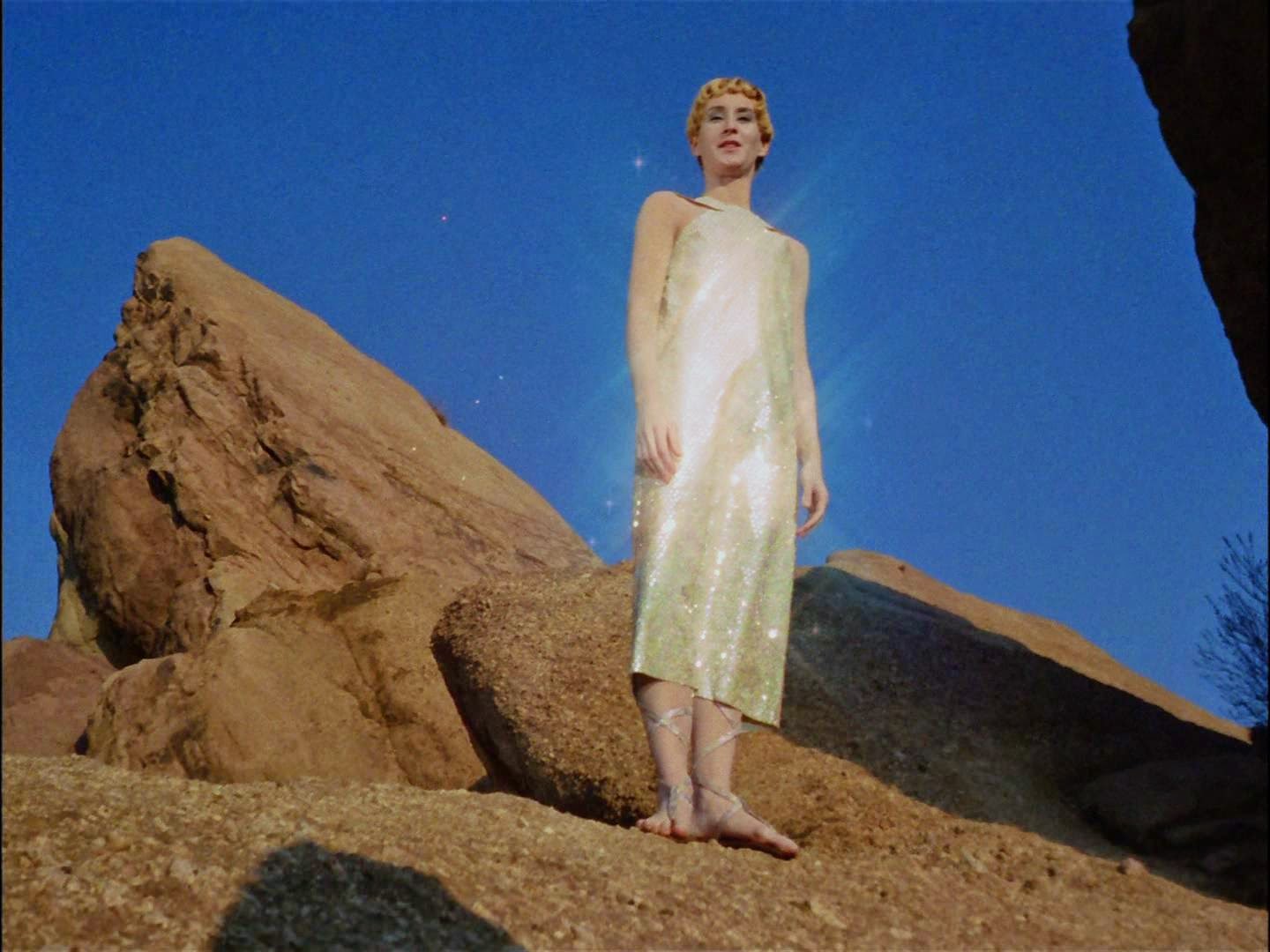 This lesson is learned as a way to prove humanity’s worth to the Metrons, an all-powerful non corporeal alien race.  There are certainly a great many of those in the galaxy aren’t there…
Or are there?
What if they’re all the same ones?

I think this is another insane theory we’ll have to track. 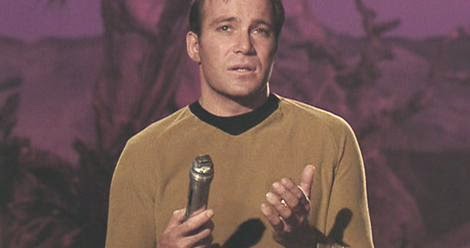 Speaking of insane, Kirk’s obsession with logging almost gets him killed out on those Vasquez Rocks.  He’s told at the outset they gave him a translator. Yet Captain Internal Monologue goes on listing all of his plans, out loud,  into the little machine that’s relaying everything to his scaly opponent.

Kirk’s fighting style needs a little thought as well.  Granted using professional wrestling moves usually works for him (including the inevitable foreign object) but he’s outstandingly lucky that boxing the ears of an adversary that doesn’t have ears worked at all.

Uhura’s still shooting glances at Spock, and comes up to lean on the Captain’s chair when he occupies it in a far more familiar way than when Kirk is seated in it. 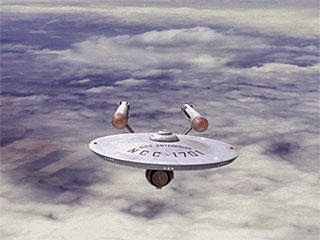 The Enterprise travels back in time accidentally for the second time.  This makes much more sense when one realizes it was supposed to directly follow “The Naked Time.”

It’s interesting that they can travel both forwards and backwards in time by going wicked fast.  Even Flash’s cosmic treadmill has a directional setting dial. It must have something to do with Warp Drive Mechanics, I guess, who cares the new effects are amazing! 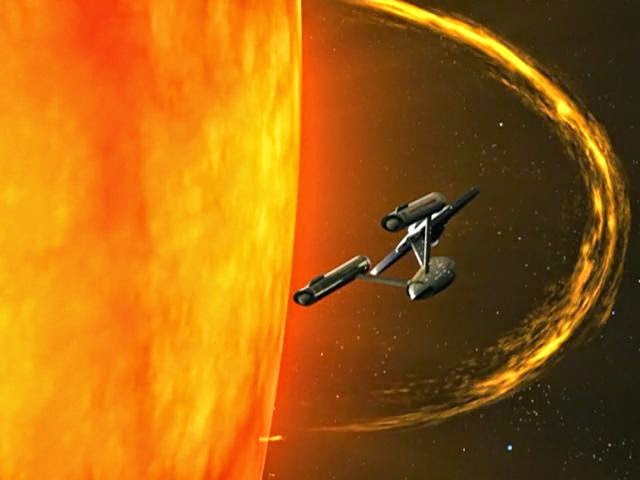 When everyone gets knocked over, Spock very coldly lifts up Uhura.  If there was any doubt that they are in a relationship, her shooting him “the look” for that action should dispel them.  Also, the two are hanging around together on the bridge when Captain Christopher enters. 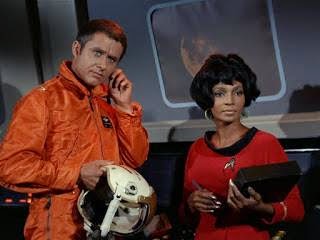 I guess they don’t have any safety/secrecy protocols for time travel yet, seeing that it’s new.  Then again, based on the other non-existent safety protocols, it probably doesn’t matter. In either case, they show a staggering lack of common sense. When Christopher walks in on the couple, Uhura reveals all kinds of stuff he shouldn’t see on the screen while Spock calmly discusses the implications if he escapes.  Those implications likely wouldn’t exist if they didn’t give him a tour of the ship.  They also explain the reason why they have to return him as his son’s future, rather than just returning him.

They certainly treat the time stream much more cavalierly than they will when they meet Joan Collins later, don’t they?  Again, they are new at this, which explains beaming down to the 20th century in full uniform with no cover story or outfit changes.  The Enterprise costume collection hadn’t been demonstrated yet. 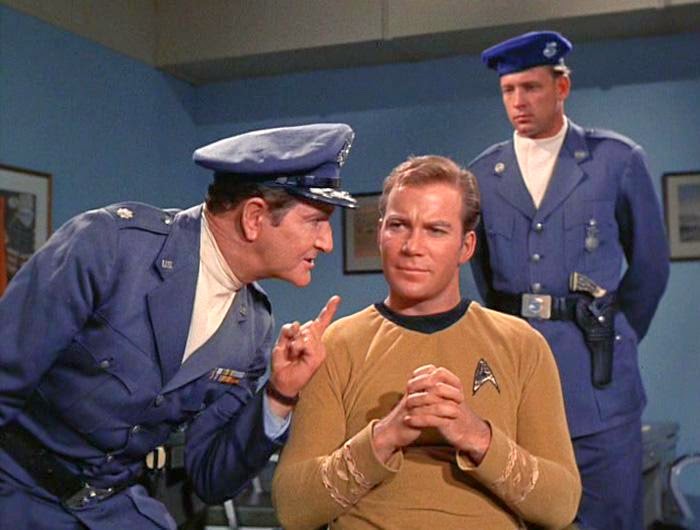 Even out of place, James T. Kirk is pretty awesome, needing three guards to subdue him and costing them time to let Sulu escape Officer Kirk from Happy Days. Sulu was panicking enough about getting stranded again, he deserved to go.

They cover all these failings up by returning everyone to the moment they left, thus removing all memories of the abductions.

Obviously they’re wrong about this, as the Starfleet Technical Manual I’ve owned since age five clearly states Franz Joseph Designs received all the information in it from the events of this episode. 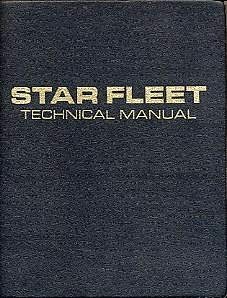 Character note:
Kirk’s quarters has been shown to have “old style” books in it since day one.  Some cool things were there from the start.

I’m not going to mention the flirting, romantic voiced computer, as it’s pretty baffling, and the show itself wisely never referenced it again…dear.

My God, man, you are brilliant! I have not enjoyed TOS so much since seeing it first run!

Wow! Many thanx, for reading and posting. You have no idea how much it means.
I've been having a major bit of writer's block lately.
Your comment is inspiring me to push through it.