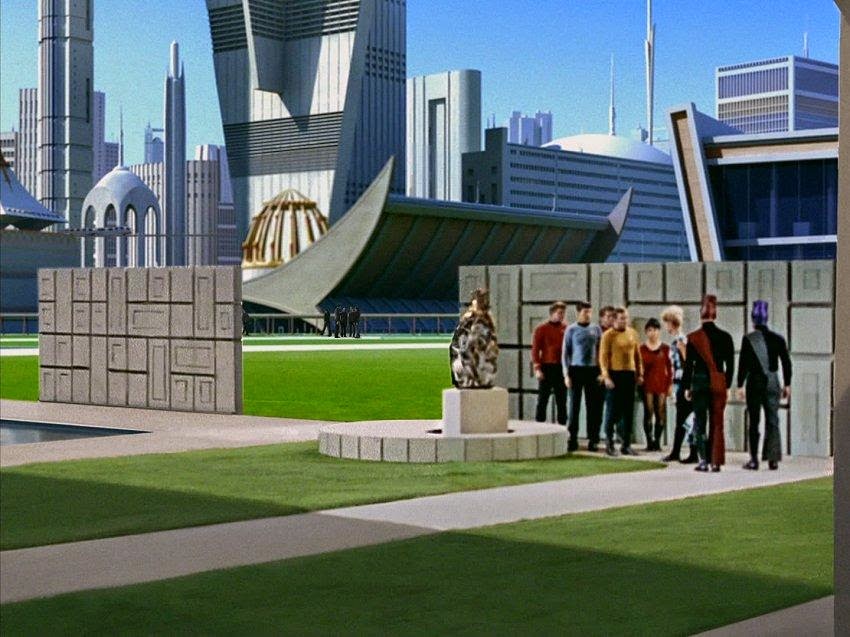 A rare happening for season one: we get a typical science fiction tale without wandering into other genres

In a much less rare happening: Here’s Ambassador Fox, another highly placed Starfleet Official who is a complete schmuck.  Those unsafe policies make increasing amounts of sense as time passes.

Finally, in a happening that is far less rare than is believed:  A gang of Redshirts survive for the entire episode.

McCoy and Scott are left in charge on the Enterprise when the landing party heads down into the unknown.  Contrary to most official regulations, this is a brilliant plan.  Scott’s penchant for defying anything that would threaten his ship coupled with McCoy’s identical feelings toward the crew meant the safest hands possible were in control.
In other words…you can’t fool the old guys.

You can however fool the laws of physics, which is how Eminiar can attack the Enterprise through the vacuum of space with sonic waves.

Viewers at the time couldn’t have made the connection, but leader Anan 7 looks and dresses (as do others) quite a bit like a Klingon. 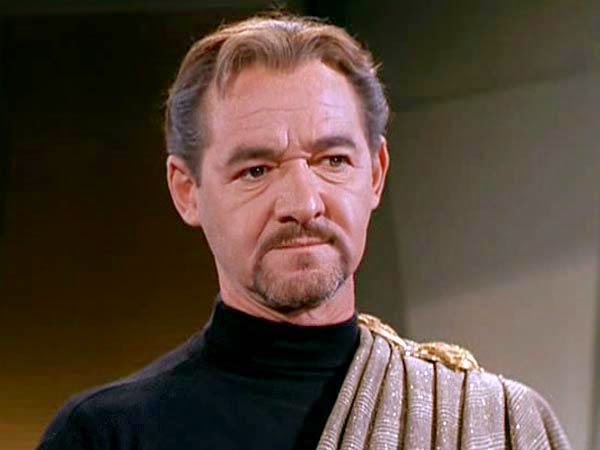 More evidence of this connection is the enforcers on Eminiar carry disrupters and communicators almost identical to the Klingon equipment.   Maybe they’re a race that branched off from the main Q’onoS culture that retained a love of war, but lost their taste for violence-  Klingon pacifists, unable to stop fighting and killing, but equally unable to bear the personal effects of it.

This episode overflows with well-known moments of Kirk awesomeness:

Talking Spock into mind melding through a wall.  That would have come in handy before. Evidently, the First Officer is getting more comfortable using his very personal abilities at his commander's whim.

He’s willing to obliterate and entire planet that doesn’t stand up to his personal morality.

He finds a way to blow up a controlling computer.
(Good thing it wasn’t placed in a woman’s body. He uses a much lighter touch on those.)

He gives a speech about “not going to kill today,” indicating there are many other days he’s still going to kill.

Of course with the easily fooled Ambassador Fox taking control, those planets will probably be back to killing themselves in only a few days, anyway. 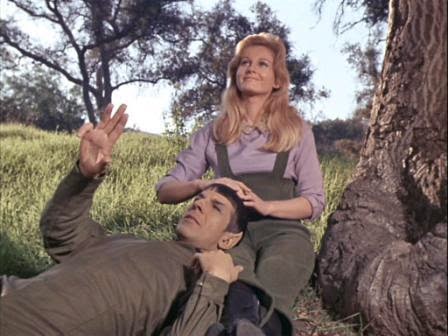 Trying to view this episode in light of what has come before brings up a parade of links.

Sulu (compromised on landing party duty once more) makes statements that illustrate he appears to have forgotten all he knew about botany, but still remembers illusion causing races.  Possibly this partial memory loss is a side effect of being controlled by Landru.

Hearkening back to the “good” and “evil” sides of Kirk, it was pointed out to him that his negative emotions were needed.  Really, though, they may have only been needed for the Type-A commander personality types like himself.  As for everyone on Omicron Ceti III, they seem to be a benevolent, peaceful and self-sufficient group.  However, since they don’t match Kirk’s need for competition and drive, he’s going to have to destroy their lifestyle.  He even is shown under lighting, and wearing expressions that match those of the “evil Kirk” when he summons up those negative emotions to snap himself out of control of the spores.

This was shortly after his Shakespearian soliloquy on the bridge, and taking the time to pack his “chubby days” wrap around green tunic for his upcoming, more relaxed lifestyle.

Watching the normally kind hearted Doctor McCoy threaten to put Sandoval in the hospital was awesome enough to give them a pass for transmitting sound from orbit.  Maybe they learned that trick from Eminiar VII?

The key to this story, though, is Spock.  I’m not going to attempt to figure out the timeline that somehow put him on Earth to meet Leila six years ago, when he was in deep space under Captain Pike. Clearly they did meet, as the screen steams up when he sees her to the point that he’s only a recording of, “Dream Weaver” away from becoming Garth Algar.

Kirk saw his first officer break down back in “The Naked Time” about how he never could tell his mother that he loved her.  Caring commander that he is, Jim goes right for the “Yo Mamma” lines, cross pollinating them with straight racism.  This is the first time Spock’s well above human strength levels are shown.

They would have come in handy in several previous scrapes.  Perhaps his emotional control was too high at those times.

Spock’s turn around brings us to the saddest final line (or near final) in ANY episode, and possibly any television show ever.
Forget, "Each kiss is as the first."
Forget, “Yes, it happened. But that was five thousand years ago. Andshe is dead now. Dead and buried. Long ago.”

Forget, “Let’s get the hell out of here.”

It doesn’t get any more devastating than:
“I have little to say about it, Captain, except that for the first time in my life I was happy.” 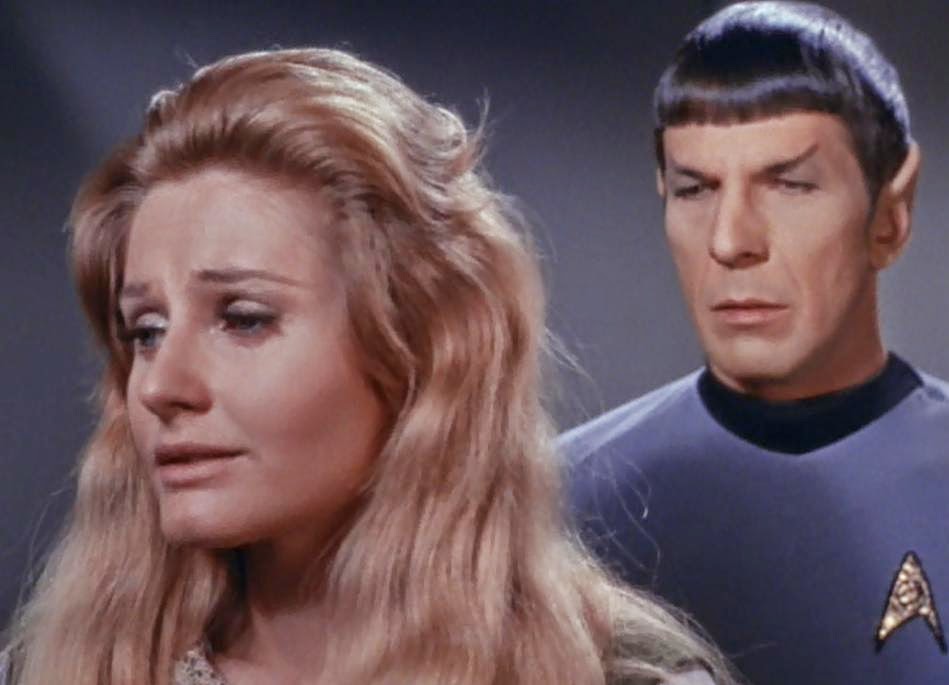 All in one sentence Spock’s condition is bared.  Due to his control, he’s never been happy before.  Due to his half human heritage, he is aware of what happiness is, and what he’s missing.  And due to resuming control, he will not be happy again.

If that isn’t bad enough, Uhura is seated directly behind him when he says that, which means she knows she wasn’t able to make him truly happy.  Evidence of any possible relationship between the two dries up after this story.

It’s not hard to guess what triggered Uhura’s negative emotions to free her of control, as one of the first things she would have seen when beaming down was likely her pointy eared beau canoodling with a blonde, overall clad hussy.

One final thought:  Since the “cure” for lack of ambition is known and the spores still were capable of complete physical healing. Why is the planet ordered to remain under quarantine, instead of used under controlled circumstances as a hospital or something?

I realize it’s not as fantastic a place for shore leave as the place with sexy robots that can accidently kill you based on a stray thought, but surely even Kirk could have thought of some use for Omicron Ceti III.  After all, if he had left Khan and crew here, they would have been content, happy, alive, and have neither the desire nor motivation to head out on murderous spree over a decade later.


“The Devil in the Dark” 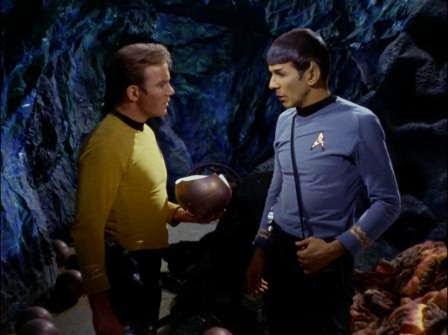 The trip of the Enterprise to the perguim mining colony of Janus VI continued and also established many patters in what became known as standard Star Trek.

This is one of the growing more frequent “monster of the week” episodes.  There are twists though.  Even though Kirk begins once more completely prepared to eliminate a last of its species, he changes his tune before he can finish off the killer meat lasagna.  The Horta is lucky that it didn’t kill any of Kirk’s crew on the ship or directly threaten the Enterprise.  The story would have had a very different ending then. He predicts the answer to what is really going on by warning everyone that there is “nothing more dangerous than a wounded animal.”  Obviously he forgot there is truly nothing more dangerous than an animal mama protecting it’s young.

What is surprising is that the Captain doesn’t eradicate the miners and let the Horta family remain alone in peace.  A squad of Redshirts runs around this episode, but the malice based casualty comes from one beaten to death by the miners before they take off to attack a phaser resistant pizza rock armed only with clubs.
Ladies and Gentlemen: May I present “Space Rednecks.” 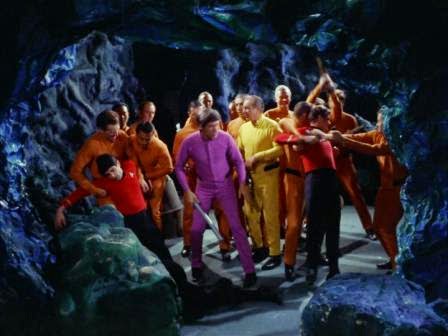 This story focuses mostly on the main trio, and for a majority of that it’s really only Kirk and Spock.  Their friendship gets some focus, particularly in Spock’s changing attitudes toward the Horta.  He advocates protecting it based on the “last of its species” thing.  However, on the opposite side of a “Jim” moment, when Kirk is nearly killed in an avalanche, Spock emphatically tells his commander to blow the thing away.

By that point, the Captain refuses, because once more the lesson is best presented by having the Military mind be swayed toward compassion and understanding.   Spock’s mind meld provides the final confirmation that they made the right decision.  The Vulcan screams more than previous or later cases of mental contact.  I doubt the Horta was in more pain than any other being Spock melded with.

Remember, he was laying hands on a creature that secretes rock dissolving acid.  No wonder he yelled.

Scotty stays in command, where he shines in his brief appearances as always, both leading the ship and remaining crew, and whipping up urgently needed technical solutions on the fly. Yay!

McCoy does get a key moment though, performing successful surgery (“I’m a doctor not a bricklayer.”) on a creature he didn’t believe existed only a half hour before.  To look forward: This makes his lack of Klingon anatomy knowledge to a level where he can’t save the Chancellor in Star Trek VI strain believability.

One reason for Bones’s incredulity is the tricorder couldn’t detect a silicone based life form, because it can only pick up humanoids.  Considering all of the energy creatures and other bizarre aliens they’ve already met, that’s a pretty racist technical design specification.

Other Technical Note: We learn the difference between the type one and type two phasers in this go around.  Nifty!

Non-Technical Note:  The episode ends with a joke making fun of Spock’s ears yet again.  Maybe the tricorder isn’t the only racist thing on the Enterprise.

“Computer War” - you really hit the points I always wondered about - and you came up with much greater meaning than I ever did! I'm going through the dvd set now - love coming here for the recap after each episode :-)

Its funny, I'd seen every episode multiple times, but always from the tapes I made staying up till midnight to record them on channel 11 in high school.

The first time I saw them in order was when I got the blu ray sets, and noticed all the patterns.

Very happy someone else is enjoying the posts. It makes repeatedly almost falling off the treadmill while taking notes worth it.