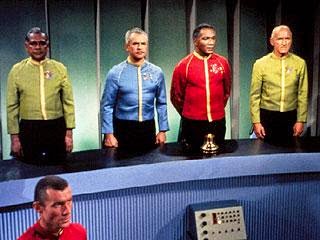 I love me a courtroom drama (which this was) set in a fantasy world that tries to apply regular legal proceedings to a bunch of stuff that doesn’t really exist.

That’s probably why I have so many Daredevil and She Hulk comics, come to think of it. 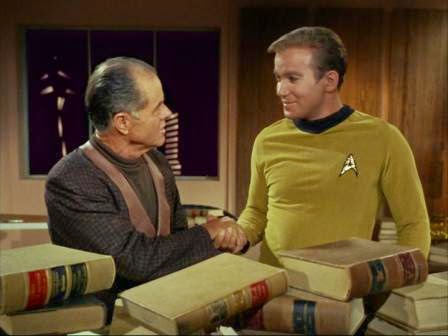 Samuel T. Cogley’s devotion to books over computers makes perfect sense in the Star Trek universe, considering the inability to transmit text or display it on most machines.

As much as I enjoy seeing legal issues bent into an unreal setting, Starfleet Policy issues are RAMPANT in this one.
A) Assigning Finney to Kirk’s command out of the entire fleet with documented and logged issues between them. 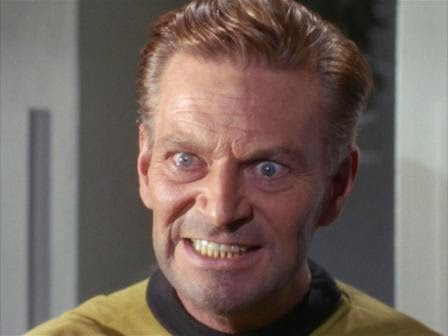 B) Reviewing Finney’s psychological profile should have rendered him unfit for high School Cafeteria duty, never mind space exploration.
C) Assigning a prosecuting attorney with a known past with the accused.
D) Pointing out the Court hasn’t reached a verdict while the victim is proved to be alive.
E) Letting the accused leave the trial alone to hunt down the (still unconfirmed) person he supposedly killed. 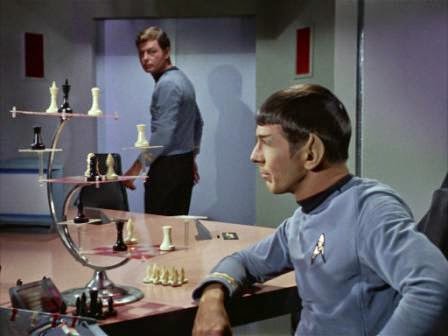 Is Spock’s chess game program that integrally connected to primary ships functions such as the log recorders?
Then again, that’s probably a holdover from “mainframe mentality” when the show was written.

However, there is no excuse for the placement of the pod jettison switch.  The Enterprise has sixty gazillion controls.  Does it make sense to put the one that shoots a crew member into space on the Captain’s arm rest?
That would be the same arm rest that both McCoy and Spock lean on when offering advice.

The same arm rest that contains the communication switches, which are constantly slammed for emphasis in emotional moments?

Kirk is the greatest commander in the fleet and he’s accused of using it prematurely.  How many other of these yo-yo’s we’ve seen in Starfleet have accidently fired a friend into a star they were passing by putting a coffee cup down on the wrong side?

Some other questions about the computer:

How does anyone trust it after it was openly hitting on Kirk last episode?
Why do they think it’s a good idea to use the computer Spock has proved is compromised to conduct the heartbeat listening program?

Then again…again, they claim they are amplifying the sound “One to the Fourth Power.”  That whole heartbeat thing was probably a bluff.  Spock and McCoy figured out where Finney was on their own, and made a trumped up excuse to let Kirk go get him.

The biggest computer issue though is the basis of the whole story.

They established in “The Menagerie,” as soon as the images on the bridge were shown, that the Federation ships do not have the capabilities of that level of detail in the visual log.  Yet that exact level of “watching the episode” detail is what convicts Kirk.

More and more, we’re seeing evidence that the Talosian’s far reaching illusions continue to mess with the Captain and crew long after leaving Pike behind. 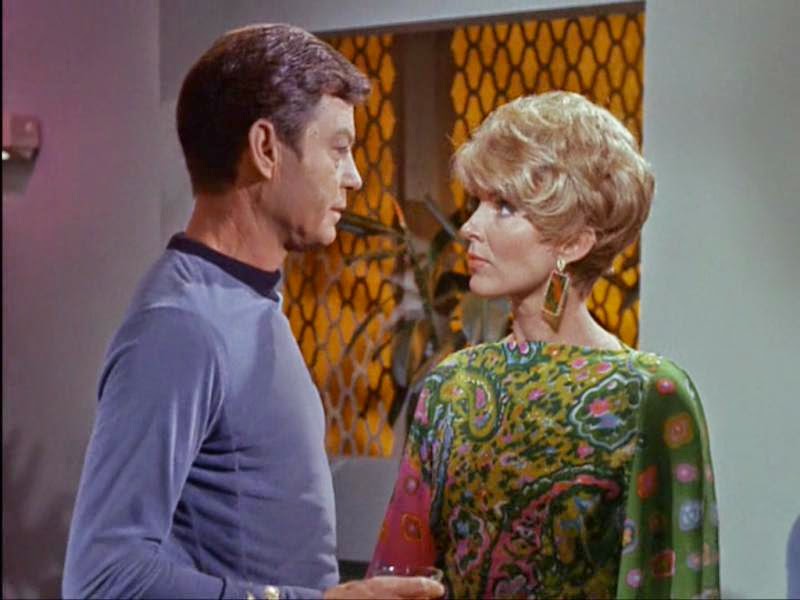 Bones hits on Areel the moment he sees her, you old dog you!

Kirk’s whole focus is around, “Nothing is more important than my ship” (crew implied).  That drives every decision he makes throughout the series.

Uhura stayed on the ship when everyone else was ordered off except the Helmsman (obviously) Kirk (accused) Spock (computer expert) and McCoy (heartbeat thingy).
Why? 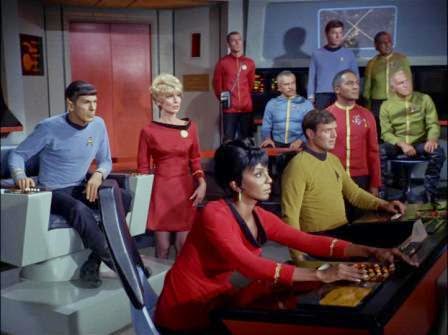 Besides communications, she can also man the Navigation station, which ends up becoming critical.

Since the ship itself is a character:  First Jeffries Tube appearance, and similar to many other Trek cliché’s the first time doesn’t fit the pattern. It’s Kirk, not Scotty who climbs in. 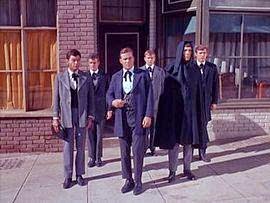 Sort of a Lovcraftian EC Horror tale again this time or it would have been if Landru was a demon and not a machine. 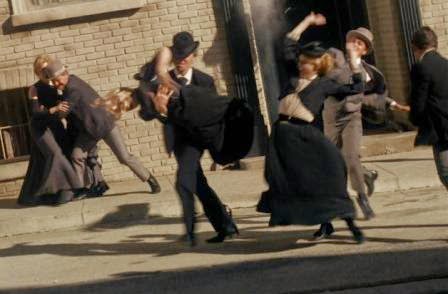 Festival is a terrifyingly effective method of controlling the population.  The meek are afraid to revolt against the controlling power, while the natural bullies get far too many advantages from the Red Hour to desire any change. 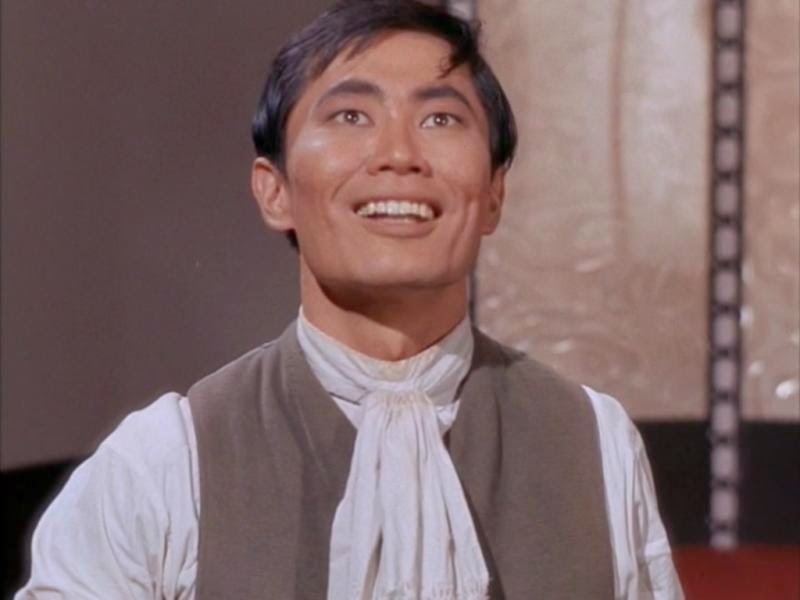 Sulu’s in the landing party, and gets mind controlled. Poor guy can’t catch a break. No wonder he likes to stay at the helm.  Here’s a scary thought:  Since Landru creates a hive mind, does that mean Sulu went into Festival mode aboard the ship?  That would have been messy.

There are some key first appearances for this one-
We meet the Prime Directive!
Shortly after, we meet Kirk’s ability to dismiss it when the culture doesn’t match his levels of morality. 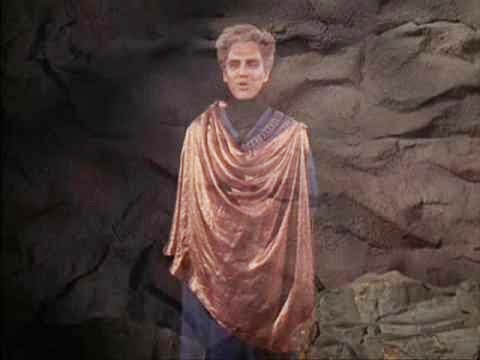 Teaching the meek that freedom has to be earned is something the Captain will become known for almost as often as talking a computer to death.  I’d guess he got some extra joy out of “Pull the Plug!” this time around as revenge on computers in general after last episode.

Kirk’s bluffing skills are shown to awesomeness levels above and beyond any previous or subsequent “maneuvers.”  The man fakes being part of a hive mind, and fools members of that hive mind…who are telepathic!

Continuity wobbles a bit, but catches itself before collapsing.

Having someone with mind reading abilities along would have helped on several occasions, but Spock takes the time to point out the hive mind would block his attempts to mind meld.

Similarly, near the end of the episode when Spock finally remembers he knows the Vulcan Neck Pinch, Kirk calls him out for not using it on other guards in previous fights.

Spock must have been a little distracted this day.  It takes the actions of those “of the body” to remind him of a computer.  One would think the fact they all talked in the cadence and monotone of the ship’s computer he works with daily would have tipped him off first.

Maybe he was busy trying to figure out the structure of the resistance?  Reger explains they are organized into groups of three, but only know the identity of a single contact.  That sounds suspiciously like groups of two.  It must be using Common Core math. 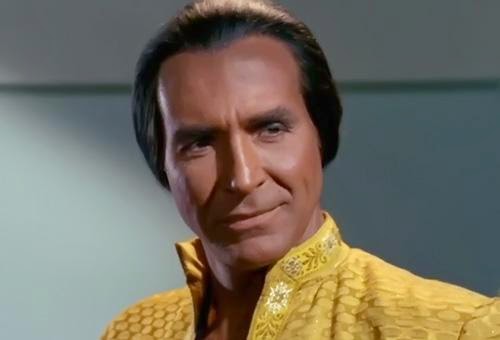 Kirk and Spock really sound like an old married couple sometimes don’t they?  Jim gets unadulterated joy out of proving the Vulcan wrong. 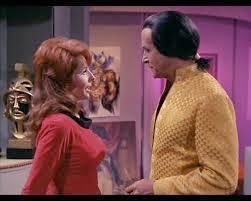 The Enterprise travels with a historian on board?  Even its Captain acknowledges how useless that is.  No wonder he doesn’t fight to get her to stay.  Besides, Kirk knew the whole story of the original Botany Bay Colony.  He is the ship’s historian.

Khan is a Eugenic Superman and quite the Smoothie. I wonder if Montalban was prohibited from going completely shirtless to avoid comparisons to Kirk. 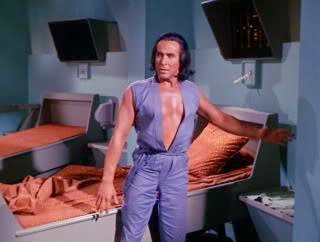 I know the role was reinvented, and I did like Into Darkness, but there is no question as to which adversary was worth coming back for a big screen return.  Just like there’s no question that any other actor could embody Khan like Ricardo did.  When Marla starts to swoon before he wakes up, it’s completely believable.  Her state of mind may be the reason she doesn’t notice there’s no way he’s a Sikh.  She does notice other things however…Lieutenant McGivers is totally checking out Khan’s butt in his cabin.

More great Starfleet Contamination and Safety Protocols:  Not only do they beam the recently awakened, centuries old individual to their ship with no medical barriers, almost the first things they give him are the Enterprise’s technical manuals.  Then he’s able to beam to the Botany Bay, wake up everyone, 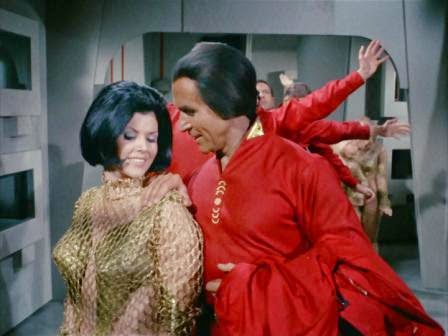 hold a space Pilates class and beam back, without so much as an extra light blinking on the bridge.

It would be a wonder how they managed to survive a week and a half, never mind a five year mission if the whole crew wasn’t completely tough as nails awesome. 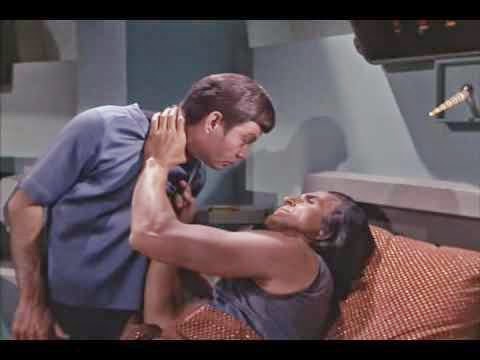 The compassionate ship’s Doctor (whose dislike of transporters gets established) stares down a war criminal dictator with super strength holding a scalpel to his throat.  By being unflinching to the point of offering advice on increasing the efficiency of his own demise, he earns the respect of both his opponent, and the viewers. 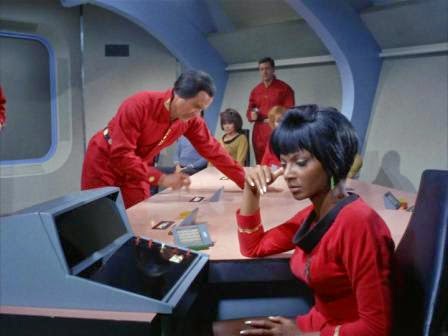 Uhura is equally tough, not breaking under Khan’s commands or physical threats. (Unlike pretty much every other female crew member we meet who are ready to sign on with the alien hottie of the week.) She also stays focused when things are most chaotic.  When Marla left, she’s the one that shut the view screen, no doubt faking sadness as she knew Kirk was about to be rescued.  Then when everyone is running around as the gas is released, she’s hitting buttons on her control panel, no doubt activating what pathetic anti invasion protocols the ship has.

The good Captain and the former dictator form a mutual appreciation society due to their similarities.  Khan is a member of a miniscule club of beings who have threatened the Enterprise, and killed crew members but are still allowed to live.

That “Ability breeds ambition” quote would easily apply to either of them.
Heck, they both read Milton!

Khan extends equal respect, crushing Kirk’s phaser instead of simply shooting him with it, allowing the Captain the “manly dignity” of hand to hand combat.

Khan, being strong and intelligent enough to use a Vulcan Neck Pinch, probably had no doubt he would best the Captain.  Jim wins due to a piece of knowledge his worthy adversary must have missed when reading the technical information stupidly given to him.

The Enterprise is made of Lego, with large, easily swingable bits that pop right out. 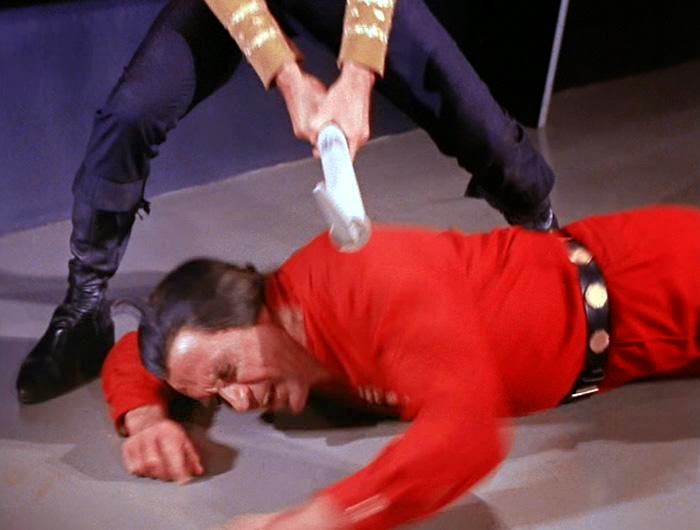