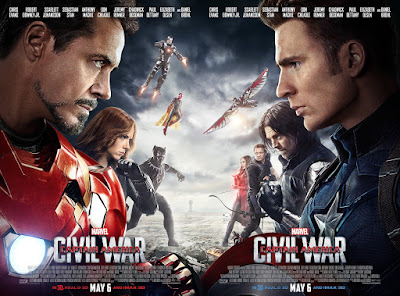 I’m sure everyone’s expecting my Marvel Studios Films reviews to be expansion on:

Woo! It was awesome!

That is not the case for Captain America: Civil War.

At this stage, the movieverse they’ve constructed is complex and deep enough to delve further into intriguing espionage type adventures and craft a film that was layered, compelling, and filled with deep and conflicting emotions.

However, since it’s set in the same universe as all their other films, it still had many, “Woo! That was awesome!” moments.

And frankly, since life itself tends to be filled with deep and conflicting emotions, we could all use a few more “Woo that was awesome!” moments.

Before I get any further, the Star Wars dominance of this year needs to rear its head with a question:

Since Marvel went out of its way to have a “sneaky” Empire Strikes Back reference in all of the phase two movies, why did they wait until the start of phase three to throw in a giant, overt one?

I’m trying to avoid specific spoilers, but the movie is called Civil War and all the promotion material is based upon choosing sides and superheroes beating the snot out of each other. Therefore I feel justified in working off the basis that the splintering of the Avengers into two factions led by Tony and Steve that disagree with each other is a given and not a spoiler.

Yet we get our panties in a bunch if the reasons for the superhero fights don’t line up with our personal world views of the characters.  The Marvel Comics' Civil War and Avengers Disassembled arcs were both heavily criticized for using mischaracterizations to force the desired outcomes.

The Marvel Cinematic Universe yet again benefited from taking it’s time to build itself up organically, piece by piece.  (Unlike some other company’s superhero fight movie I could mention that appears to have been thrown together at the last minute based on a couple of focus groups and some unrelated comic book story references.)

Both sides of the conflict had sympathetic, logical and believable reasons for their stance on the central issue.

Cap and Iron Man (as well as the rest of the Avengers and some new comers) also had personal attachments, loyalties and emotions that were completely keeping within their characters.  This made the devolving of a disagreement on principal into a full on battle also organic and believable.

And speaking of battles, towering over the other massively impressive action scenes, they totally blew out all the reserves for that airport fracas. 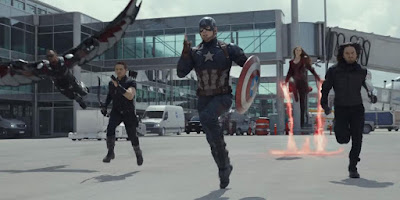 I do believe it rivaled the extreme insanity of any of our Up the Lake table top TSR Marvel Super Heroes game battles.  Yet, they made sure the power of the strong bonds of trust and friendship between combatants was conveyed, including which ones were damaged, and which were strengthened during and after the epic kerfuffle.

The villain also helped matters along.  While the least over the top, I do think he was the most intelligent, focused, and therefore successful bad guy to show up in a Marvel film so far.

Doing a “Civil War” requires a large number of heroes, and this film had 'em, but it is, unquestionably, Captain America’s movie.  The plot and the viewer’s emotional investment in it are tied to Steve and those he had the closest attachments to.  Being the field leader of the Avengers is one of Cap’s defining traits. With that established, it wouldn’t make sense to follow his story without the team.  All the other heroes had a purpose for being there, and new and old interactions were allowed to flourish on the sidelines of the main story. (I could have done without the old Marvel fall back of “our female heroes have problems controlling their powers” but you can’t have everything.)

Ant-Man brought the lightness of his film for his appearance, and Spidey added a similar tone, as he usually does in group situations.  There were some nice nods to Peter’s burden of responsibility hinted at, to pave the way to show him as joking and quipping in the face of both external and internal adversity.

With all of the extra characters thrown in, it would have been easy to lose Cap as the center.  However, it is his connections, driven by his beliefs and his loyalties that carry the movie from one key moment to the other.  With Steve and Tony as the two prime driving forces behind the Avengers, the differences between the two took this movie into darker places than the Marvel Universe has gone before while remaining true to both of them.


However, the bonds of trust and friendship that the two had formed, not only with the Avengers on both sides, but primarily with each other, allowed the darkness to be illuminated by hope for the future.

And that’s really what super heroes are all about. 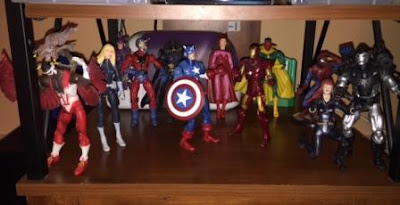 Note: No Redwing did not defect to Tony's side, nor is he jealous of the awesome movie robot that replaced him...its the only way he stays on Sam.
Posted by Jeff McGinley at 2:00 PM

Agreed on all points! What a movie!

Thanx for sharing, glad you enjoyed it.