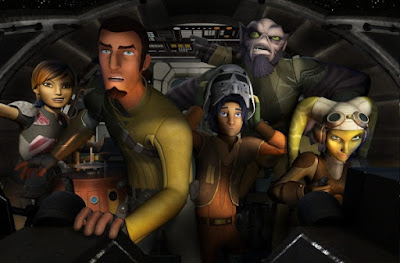 We meet the starship Ghost and its crew of Hera, Kanan and their droid Chopper, probably.

1. The Machine in the Ghost

Sabine paints some imperial stuff...or something

Zeb picks a fight, or tries to avoid a fight and fails. I'm pretty sure Zeb fights someone.

Ezra is introduced...likely with some kind of desert / orphan Skywalker homage.

OK I admit it. I never saw these.  Before I figured out what they were, they vanished off "on demand" and I was too busy and lazy to look them up on YouTube because even I need to sleep sometimes.

There, you've exposed my inadequacies,

I hope you're all happy.

Link to other Seasons
Posted by Jeff McGinley at 2:00 PM