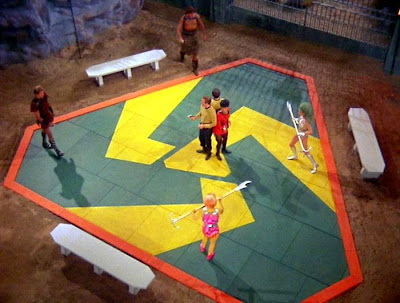 The Gamesters of Triskelion - Mom Title: "400 Quatloos on the Newcomers"

On Lt. Leslie back on the bridge and clearly still not dead:
“Um…”

On Chekov asking, “Captain, where are we:”
“Triskelion I believe, based on the title.”

On the reveal of the Thralls:
Rosa and Anabelle- “Ewww a yellow person.”
Anabelle- “Green hair can be pretty, but not hers.”

On Chekov’s fighting style when grabbed from behind:
“What is he doing?”

On understanding the Trek universe:
“How does he know their names?”
“What are thralls?”
*both asked before Captain Kirk asked them*

On Spock saying, “I would welcome a suggestion, Doctor, even an emotional one, as to where to look:”
“Wow, he’s really going for a last resort.”

On Kirk questioning if they’re even in the same dimension:
Anabelle- “Um…wow.”
Me – “The Mirror Universe was this season.”
Anabelle- “Oh yeah.”

On Leslie still being stubbornly not dead:
“Maybe it’s not Leslie; it’s his twin brother Phil.”

On Shahna bringing multi colored space food:
“Ooh! M and Ms!”
“They should have given Kirk the yellow thrall that would have been funny”

On Kirk defining “beautiful" by showing Shahna her reflection in a tray:
“You mean this pan is beautiful?”

On Kirk being whipped:
“This is like The Passion except there are no marks.”

On Kirk logging while being whipped:
*raised hands in a surprised/ annoyed shrug*

On the rest period of fifteen trisecs over in a blink:
“That wasn’t fifteen anything.”

On the red “welts” from the whipping:
“Wow, great job.  That’s some quality makeup work there.”

On Spock dealing with McCoy and Scotty arguing that leaving where the Captain and others disappeared was a bad idea, ending with:
McCoy- “If they weren't there it's ridiculous to think they could still be alive. Not after all this time.”
Spock- “In that case, Doctor, we have nothing to lose by pursuing our present course.”
Anabelle- “BAM!  Logic! Drop the mike!”

On Kirk hitting on Shahna:
“Geeze!”

On Kirk explaining the custom of his people helping one another:
“Not everyone, some people just run away…oh ichhh they’re kissing.”

On Spock conspiratorially asking if McCoy and Scotty are planning to declare a mutiny with their incessant arguing:
“Boom!”
On McCoy and Scotty relenting and Scotty offering a “wee bit more” than Warp Seven:
Rosa- *snickers knowingly*
Anabelle – “Let’s go Warp Fifty, WOO!”

On the reveal of the providers:
Anabelle- “They’re rocks.”
Me- “Brains.”
Anabelle- “Ooohhhh.”

On Kirk’s bet, “If we lose? We will remain here, the entire crew of the Enterprise:”
“Oh geeze, there he goes again.”

On the Andorian thrall:
“Ooh its… its…
One of those things.”

On the climactic final battle between Kirk and the Thralls:
“He’s constantly stepping on the wrong color, negative twenty weapons for you.”
*starts counting every time Kirk steps off yellow*
“No one is staying on their color.”

On Shahna coming in:
“He just has to wound her, and then a fresh one will come in.”

On the Thrall’s surrender:
“What? His whole body is in the blue area. I’m just saying.”

On Shahna saying, “Goodbye, Jim Kirk. I will learn, and watch the lights in the sky, and remember,” after the crew leaves and she’s alone:
“Aww. She’s learning to do a Captain’s Log.”

On the episode in general:
“I still think Kirk should have gotten yellow one. It would have been funny.” 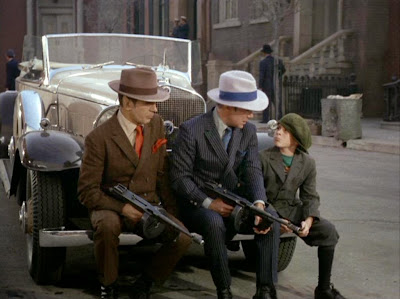 A Piece of the Action - Mom Title: "Right? Check."

On Starfleet tactics:
“Of course the main three people are beaming down into danger again.”

On Kirk’s billiards ability:
“What is he doing?  Not playing pool.”

On gangster charisma:
“I like Oxmyx; he’s cool…and kinda scary.”

On the game of Fizzbin:
“What…”
*blank stare as it continues*
“But he said…”
*longer blank stare until they flip the table*
“That was great!”

On returning to Oxmyx from Krako:
“Aww…I want to see some of the other hats.”

On Uhura asking, “Mister Spock, what are you doing on this frequency?”
“Lord knows!”

On the different gangs:
“I like Krako’s group better.
They’re more fun and have better hats.
He reminds me of mouse in Zootopia.”

On the plan with kid who wanted a piece of the action:
Anabelle- “So, is the kid gonna kill everybody?”
Me- “Yup.”
Anabelle- “What! No!”
*The plan is executed*
Anabelle- “Well, that worked.”

On Kirk addressing his first officer in the lingo of the land:
“Spocko?”

On Spocko’s, “I would advise youse to keep dialing, Oxmyx:
Rosa and Anabelle- *evil laugh*

On the ships phasers being used to stun several blocks:
“Boom! Drop the microwaves!”

On Kirk’s only final concern being, “Well, in a few years, the Iotians may demand a piece of our action:”
Rosa - *side long knowing glance* “Really?”

Click for Trek Index (Treklets at Bottom)
Posted by Jeff McGinley at 2:00 PM