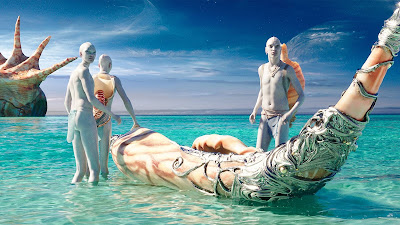 I am woefully behind on movie viewing this summer, thanks to an incredible journey to Peru featuring epic mountains, mysterious ruins, amazingly friendly locals, and of course, horrifying clowns on public transportation.  All I've seen is Valerian and the Ten Thousand Planets.   I had to see that one in theaters because I knew a Luc Besson helmed French science fiction film based on groovy Sixties comics would be wild, original, visually stunning, freaky awesome, and die at the box office when presented to audiences who complain about everything being remakes and sequels and then ignore any cool, different stuff.

This is a sin.

After being inundated by giant, extravagant South American churches, it struck me as a good a time as any to talk about this older film. More importantly, its far enough from the season its associated with to reduce the chance of me getting hit by lighting because of it.

Translation: this is probably going to upset some people, but it needs to be said.

Mel Gibson made a couple of films where he famously wielded a blunt object as a weapon in a memorable scene.

Like the one up for discussion today, Braveheart was also a graphically violent Mel Gibson directed movie with a tragic ending and odd selections for historical inaccuracy about someone who inspired people under tyranny,

Granted, in that one  the blunt object scene is when he’s ridden into a bad guy’s bedroom on a horse to deliver a mace and chain to the face wake up call, and caused a lot more cheering.

Awesome though that was, today we’re talking about the other story Mel directed where you only saw his hand holding the blunt object. 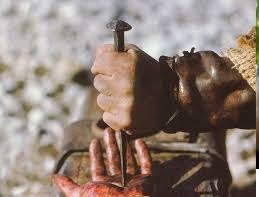 On August 31, 2004 the Mel Gibson film The Passion of the Christ was released on DVD.

Being a focused and devout Catholic, my Mother purchased one for herself and one each for both my sister and I. She watched it in short order, and tried to watch it every year on or about Good Friday.

Being a focused and devout Catholic, my sister also watched it, and sometimes joined in my Mother’s Good Friday viewings.

I took the shrink wrap off the case a couple months ago when my daughter’s class was watching it in CCD, but she was going to miss the beginning because we were visiting the Holy Land, Disney World.

She had no desire to see any of it twice.  After, I watched the first half with her, she saw the rest in class, and I finished that night while exercising.

Because I needed to know how it ended.

There are some serious issues with this adaptation.

The best comparison I can think of is to the David Lynch directed 1984 version of Dune.

And not only for the Messiah in the Desert idea.

There are far too many characters with far too little time spent on each to keep track of, or understand motivations for them.

It is an excessively reduced slice of the story from the initial narrative.

The plot comes off as almost totally incomprehensible for those who don't know the source material, with many occasional asides to undeveloped themes and individuals that should be crucial to understanding the theme and meaning of the work, but aren't followable in the format used.

And it goes without saying that the book is far better.

Mel and the gang went overboard for accuracy, dressing locations, manufacturing period costumes, and researching dead languages to create a realistic depiction of the crucifixion and events leading up to it.

And then…mixed up a symbolism gumbo that sloshed all over their realism.

Most of the crucifixion victims were carrying only a simple cross bar, to remain in line with the methods used in Roman occupied territories.  Except of course for Jesus, who was carrying an entire Appalachian oak tree over his shoulder.  The ridiculous weight of his personal telephone pole probably contributed to a deviation from the standard Gospel tale.

Due to similarities in Apostolic Feng Shui, for about an hour most weekends of my conscious life I have sat next to one or more of the Stations of the Cross.

Based on those wall tiles, Jesus fell three times.

I don't care if  Mel used some weird combination of Biblical Numerology and the New Math, three should not equal a hundred and fifty seven, with each fall in zooming in slow motion like an NFL highlight reel.

To keep with the realism idea, he could have been falling due to losing an amount of blood over and above that of the human body's holding capacity.  I know Mel was after a depiction of suffering, but the man in that film lost Deadite volumes of blood.  There’s a reason the Evil Dead franchise lives in the comedy/ horror genre.

A little blood brings empathy; a lot of blood brings anguish, and as it increases, squeamishness. This film moved into proximity of the fountains of fluid that Sam, Rob and Bruce were famous for using to generate laughs and tension breakers.

I'm not sure what to make of some of the more askew symbolic additions.  Judas's trip down Nightmare alley made me expect Freddy Kruger to show up.

Then there was the addition of whatever the Anti-Mary/ Lady Satan and her demonic old man baby/ ventriloquist doll thing was. 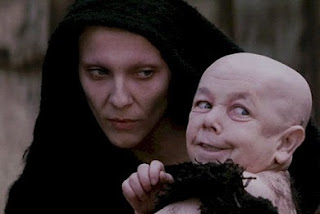 My biggest gripe about this film is - much like a bunch of organized religions-  the most important and uplifting message got clobbered, ignored and drowned under the guilt.

The bad guys in the story are shown to look ashamed and remorseful, which is only fitting when watching someone have hunks of themselves methodically removed for well over an hour of screen time above and beyond what anyone could produce let alone survive.  Although due to the length it rolls on for, their expressions do phase a little into the blankness resembling,
“This meeting has already run two hours over and I’m already late for dinner!”

By the time they resorted to flipping the cross over on top of him to bend the nails, complete with cartoony squelchy noises,  it was well into the realm of Sam Raimi ridiculous once more.

Any effort to show the "central message of the faith stuff" was minimal.

Flashbacks were used to show the  compassionate, lesson filled moments of Jesus’s life.

Y’know the ones that all of his core teachings about caring for others are based on.

Along with them, they mixed in a gag about him being a carpenter trying to design a modern height table that wouldn’t have been out of place in Life of Brian or Lamb. 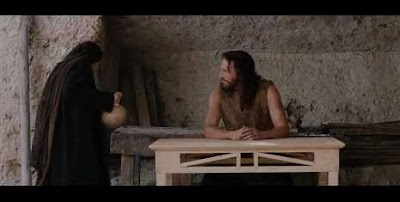 These key moments were presented out of context, and any messages about the importance of compassion and valuing others vanished instantly as it immediately cut back to him being brutalized in ways that must have required paint rollers and power washers to apply the make up effects.

None of his good works and deeds were illustrated as the main way of drawing his followers to him.

Instead, it was the early, Old Testamenty Wrath of God type earthquake when he died that directly demonstrated finally making people believe in him.  Having birds show up to peck the face off the "bad" criminal on one of the other crosses insured that tone was set well before the earth shook.

The resurrection, highlighting second chances, redemption, forgiveness and all those other minor core beliefs of his teachings (that the movie mostly ignored) got a twenty section vague flash at the end, after over two hours of  cruelty, pain and death.  It also focused most on his wounds, in case the audience forgot who the guy in the cave was.

Considering the whole point of the suffering is that it's temporary,  needs to be accompanied by the compassion thing and that leads to eternal life and happiness. I think they blew the ratio on that one.

I will not be returning to any regular watching of this film, though that lightning attracting thought process in my head about what is funny means I will be hunting for a blooper reel.


However, there was a benefit to watching it.

Viewing this "school sanctioned" event, coupled with the appreciation for make up effects learned from Face Off, meant handling the far more blood, gore and  torture than needed for the story in this excursion meant my daughter was clearly old enough and mature enough for almost any other movie in the every growing list of ones I have been holding off showing her when she was little.

Since I am a responsible parent, I did create a teachable moment by pointing out the different emotional responses the same volume of gory makeup effects produced when surrounded with the varied artistic efforts in the assigned movie, and the following two:


A)  She was able to see the beautifully handled, tragic capstone of Hugh Jackman's run in the X-men series that she's enjoyed all of the other movies in. (Except that first Wolverine one nobody including Hugh, liked...whoo.)   Luckily, she decided not to slap me for every profanity, as she is want to do.  She merely counted them in Logan, reaching eighty-three, not counting the Spanish ones. I don't think I could have survived the impacts through the rant where James attacked his broken truck with a shovel, which she impressively kept pace with.

It was a dark and bittersweet ending to a great run, but excessively well done, and brought a tear to all of our eyes.

As far as the action, she did say, "Eeeewww," a lot (though not as much as her Mother) when Laura or Wolverine unleasshed upon their foes.  But it was an "Eeeewww" tinged with an evil laugh and an occasional, "awesome," thrown in. 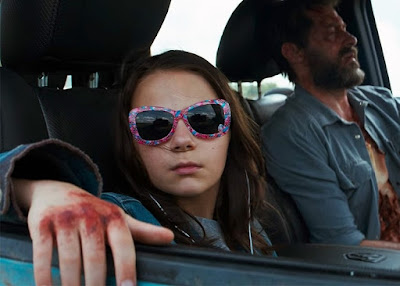 That's my girl!
B)  We finally got to enjoy a family togetherness viewing of the Greatest Film in the History of the Cinema (and its sequel) Evil Dead 2, and Army of Darkness.  We laughed hysterically, side by side,  all the way through both. 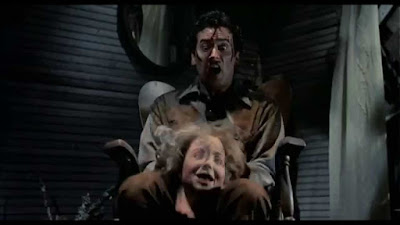