The Thing About Horror Movies

Halloween’s a comin’!
Keep a sharp eye out for weird things!

I’ve talked about, “Why we watch horror movies” before.

But instead of my (usual) previous long winded analysis, I had that answered more directly recently.

My daughter’s horror movie genes have finally kicked in full blast.  Like her Dad, she came into this cinematic genre through humor.  As a fan of Tim Burton films (with half her wardrobe now Nightmare Before Christmas), Neil Gaimain’s Endless mythology, and shows like Stranger Things and The Addams Family full conversion was inevitable.

We watched films where the humor overtakes the horror before, like Van Helsing, Miss Peregrin's, Ghostbusters, Evil Dead II and C.H.U.D. II, but she recently was ready to move to something stronger.

Starting out with Sleepy Hollow and the new Fright Night worked well.  These were films with well-placed scares, but with a great deal of humor throughout.  Fully graduating into the fandom after these, she asked to see a movie that wasn’t funny, but was really scary.

Fortunately, she lives with me.

I was in the middle of some deep research into John Carpenter’s The Thing.  Thanks for this goes to Shout Factory, for finding the movies that have limited but powerful appeal, charging a bit more, and packing in a ridiculous amount of versions, extras and commentaries, both new and old.

Opening between E.T. and Wrath of Khan, The Thing, was criminally neglected and looked down upon when first released.  Over time, its fantasticalness has become more appreciated, and it’s tough to find a “Top Horror Films” list that doesn’t include it.

The quality of the terror comes from two places.

The first is the outstanding cast of character actors, led by Kurt Russell, Keith David and Wilford Brimley, assembled, written for, and allowed to rehearse beforehand.  Also, since there is no way to know who is who, or more accurately who is what, or whether anyone makes it out alive in this tale, the suspense is all genuine, no padding.  Having Jed, the half wolf, awesomely performing, super creepy on his own dog wandering around the set probably helped with their method acting. 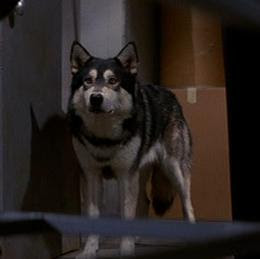 It could have worked as a character driven, darkly spooky, highly suspenseful "who done it" play, with the unpleasantness all happening off stage.

It didn’t need to work as a play, because of the astonishing practical effects employed. The words “Horrifically Beautiful” get tossed around a lot in the commentaries and interviews. Along with the words, "I didn't know K-Y Jelly was available in oil drums."

As a back up for time constraints, they called in Stan Winston to do the dog effect. 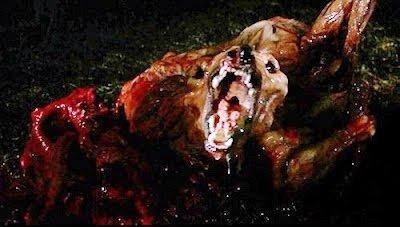 A majority of the work was done by Rob Bottin, who would eventually be known as an Oscar winning and acclaimed makeup effects artist. 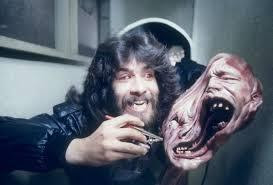 At the time he was known as an insane genius in his early twenties who lived in the studio for a year and five weeks.  While he was hospitalized for exhaustion at the end, there is no denying the quality (and quantity) of his accomplishments.

The tension isn’t only broken by each unexpected eruption of unspeakable, biological malformations, it is exploded by it.

And each time one of these eruptions occurred:

A dog exploded into a tendril and chomper waving mass… 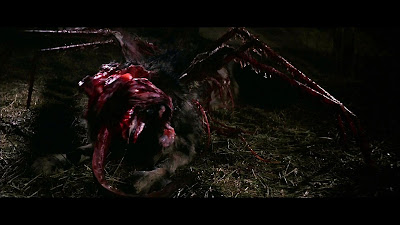 A heart attack patient developed jaws of death in its torso, and extra headed forms… 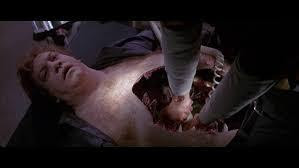 Following an initial shriek of surprise mixed with both fear and delight, my daughter absolutely HOWLED with gales of unrestrained deep and honest laughter.  Not because what was happening was funny in the classic sense, but because of the massive release.

And THAT…is why we watch horror movies.

To let all the stress and tension of everyday life get wound a bit tighter by a fictional story line while we remain in a safe environment, before releasing all that artificial and real tension in creative, visceral, and coolly unearthly ways, cutting a chunk of the real stress out of our systems.


Her horror movie genes primarily come from my side of the family...by the gore filled bucket full.  My wife says she "doesn't like that kind of story."

Yet she watched all of Buffy, Angel, Charmed and  The Ghost Whisperer on her own, some of them starting before she met me.

In addition, she recently watched the entire Alien franchise with me.  She did scream from time to time,  an understandable reaction as they are pretty much a collection of "Poppy Uppy Things- The Movie."  However she paid attention to all of them, and, on a weekend my daughter was on a scout trip,  before her genetic predisposition kicked in, we watched three of them in under twenty four hours because she, "wanted to know what happens next."  (Happy anniversary, honey!)

My daughter says she’s ready for Poltergeist next.
That’s my girl!

If you're looking for horror movie fans, talk to my immediate or extended family, because...