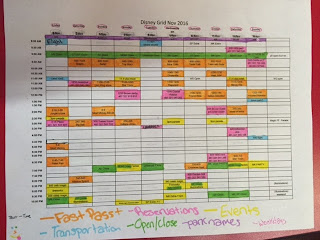 July 11, 2016
W minus 115
The planning genes are strong in my family. Anabelle has put color coded sticky notes all throughout the Birnbaum’s book to mark things for each park and other stuff.
That’s my girl!

August 2, 2016
W minus 93
Live action Muppets doing gags about history outside the Hall of Presidents. That could be promising.  With Pizza Planet turning into PizzaRizzo in MGM, maybe they finally figured out how to use that property.

August 7, 2016
W minus 88
“Scouting report” received. Cousin Antonia did a couple day long trip with her daughter and sent some planning tips. Our extended family and our Disney Family have some significant crossover.

August 10, 2016
W minus 85
Shortly before our last “all together” Disney trip in November of 2010, they announced the summer “limited run” of the Electric Light Parade, would be extended indefinitely, smashing hopes of seeing the family favorite Spectromagic night parade.  Well…it looks like the end of indefinitely is a couple weeks before we return.  The Electric Light Parade ends in October. One totally unreliable source stated Spectromagic was returning. That’s highly unlikely as A) Part of the Ariel float was already cannibalized for the Festival of Fantasy Parade and B) It would mean Disney left all the other floats and equipment sitting around doing nothing backstage for six years.

August 13, 2016
W minus 82
Upgrades to the Disney app get the “wait times” menu choice working again, and it is sorted.  This may have happened a while ago, but since they switched to having wait times on the main lists, I stopped checking this one.  Oops.

August 21, 2016
W minus 74
Mom’s present from Kim’s family arrives, a new computer so she can actually see all the links to Disney related changes  I keep sending as evidence it’s not my fault my reconnaissance isn’t going to help planning all that much.

August 24, 2016
W minus 71
Rumors fly!   Height measurements around the EPCOT Energy pavilion thought to be for bringing in a Guardians of the Galaxy coaster. Add that to Innoventions going away and the whole point of EPCOT may be changing. Crap. Hope we get to see the Dinosaurs once more. What’s wrong with having a park for us folks who like the old stuff?
And you kids, get the hell off my lawn!

September 1, 2016
W minus 63
I’ve been at my engineering job at a medical device company for 23 years, officially half my existence.  Imagineers are currently building Star Wars recreations in Disney Parks around the globe. Clearly I have offended the gods of career paths in a former life.

September 2, 2016
W minus 62
All parks have buses that go to Downtown Disney after 4pm now.  No return service to the parks, maintaining the prevention of people trying to park there for the day.  This will make it easier to have a spur of the moment decision to go shopping or something at the end of the day. It will not make it easier to remember that it’s now called “Disney Springs” and I probably won’t find the busses anyway.

September 5, 2016
W minus 59
First day we can sign up for FastPass plus.  Woke up at 7AM labor day, all done by a little after 8.  Back up at 830 to do a tweak. I seriously need help.
Either all the Rock and Roller coaster FastPasses went in three minutes, or it’s under refurbishment too.

September 6, 2016
W minus 58
Everyone’s online check in goes smoothly, as does invitations to make sure everyone can see everyone else in Friends and Family.

September 8, 2016
W minus 56
Ehhhh…not so much smoothly. A phone call to check on some anomalies reveals cross references are a mess and there are multiple versions of some of us. Awesome Disney IT to the rescue again fixes it all, and booking makes sure we’ve got the right room requests.

September 9, 2016
W minus 55
Rock and Roller refurb confirmed, possibly to pull Aerosmith from the ride. The Star Wars stage show and fireworks are also leaving.  poop.

September 10, 2016
W minus 54
Party at cousins. I constantly let family know, “In 2 months we’ll be “here” in Disney.”  The big problem with being a trusted Where Will We Go Next Guy, is having a zillion Disney plans in my head constantly while everyone else is relying on “Jeff will figure it out.” So I feel like having constant discussions and everyone else is like, “whatever you decide.”

September 11, 2016
W minus 53
I filled in my shirts in the grid and send it to everyone else. Not a necessity by any means, but something I feel I need to do. Please help me.

September 12, 2015
W minus 52
To prevent ticket fraud, the finger scan accompanying Magic Band scanning at the entrance is expanded to young guests age 3-9.  On the positive side, this is not based on fingerprints, but on some weird Disney biometric voodoo to connect an individual to the Band which is purged every thirty days, causing no danger of a child’s fingerprint records being stolen.  On the more positive side, we’ll no longer have to hear every child we travel with complain that they want to put their finger on the thingy too, and why don’t they have to.

September 14, 2016
W minus 50
The Food and Wine Festival started today.  That means a short term event has initiated which will be going on while we’re there, yet I still don’t feel close to this trip.  Work stress sucks.


…After we leave.  WHEW!!!  Rock and Roller Coaster may be open the last day we’re there, but FastPass is still locked. Here’s hoping the single rider line is still speedy.

Click for Index
Posted by Jeff McGinley at 2:00 PM

We've too have had issues with multiple versions of us. It created some fast pass issues and also some Rise of the Resistance drama.....

I could imagine. Luckily, this time it was was fixed easily. For the next trip, when the custom Magic Bands were available there was an extra me on the account they said couldn't be deleted without removing our entire reservation. It was finally fixed way later. I'd blame it for making me miss an immediate jump on the custom bands site, but that website was so messed up early on, it probably didn't work then either.

Thanx for reading and sharing.