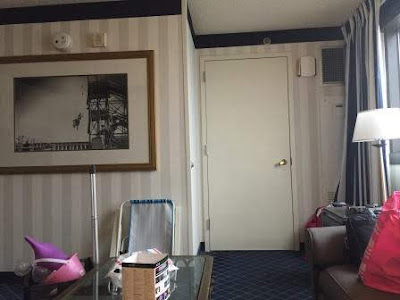 The true reason my whole family likes vacationing in the decidedly un-family focused Atlantic City surfaced on this rainy day.  Stupid O’clock in the morning approached, arrived and went on its merry way without much of a shift in position out of any of us.

The only shifting was due to the regular thrum through the wall, which not only disrupted the normally light sleep of my wife (occasional marching bands excepted) but the Ancient Egyptian Mummy like immobility of myself.

We rested in the room a bit, while making the “go home and come back” list.  A brief conversation reviewed the possibility of visiting the pool.  Anabelle’s use of the word “icky” ended that review.

A little investigating and a trip to the front desk clarified the noise we heard came from a proximity to the top floor mechanism of the freight elevator.  Unlike the guest elevator, which even in a twenty four hour casino slows down in the wee hours of the morning, the service elevator runs nonstop, regardless of wee-ness.

Explaining how much we liked the corner room got us moved directly down three floors.  The view was almost indistinguishable, and the sound was muffled.  Woo-hoo…hey, didn't you just clean that wet spot?

We originally thought some water had dripped onto the hardwood floor from our beach stuff.  That is, until it replaced itself each time we wiped it up if someone stepped anywhere on a large section of the floor.

There shouldn’t have been any pipes running under the floor there, yet we had our own Poland Spring coming up through the boards.

After successfully negotiating our new room, Rosa elected to stay to wait for maintenance while Anabelle and I went to the supplier for her large and flashy ring addiction down at the mall.

The “medium rain that the umbrella could easily handle” we saw out the tower window was much more “Classic Era Sit Com vacation episode Monsoon” on the Boardwalk.

Soaked by the elements and pistol whipped by our own umbrella, we barely survived the trip to B*Iconic.  Anabelle picked out the watch ring she was planning to buy, along with an owl ring.  She left behind a massive rainbow ring because I wondered if she’d want to wear only it and nothing else on one hand.

Before either selection or the non selection could be fully reviewed, an urgent phone call from Rosa sent us back running through the elements.

The air conditioner unit was leaking under the floor boards.  If we were dealing with sane guests, a quick repair job would have led to it drying up within the day.  However, we were in an environment where the room’s gorgeous view must have been ignored by slot machine zombies for over a week.  Therefore the water under the boards would have been with us for most of our stay.

Despite all of us being firmly in the “we’re not moving again” camp, we had fortunately left the Atlantic Ocean Visiting Version of Our Stuff mostly in a contained pile while rooting this out.

The maintenance guy was awesome, and when they were jerking us around about finding a room, he called in to the front desk yelling about how we just moved everything and they needed to take care of us.

Shortly thereafter, a bell hop arrived to trolley our bags up two floors to a full suite!

Woo Hoo! For real this time.

We stopped back at the desk, which had another enormous line, to make sure everything was stable after the multiple switches.  It was.  In fact it was so stable; our presence confused the heck out of the clerk as to why we stopped by at all.

Crazy hungry was well in our rear view mirror by now. That was easily resolved based on the massive restaurant variety that draws us to stay in the Tropicana in the first place.  Casa Taco was ready to stuff us with piles of accessible Mexican food.  They must have heard us playing Chopped on the beach, as the fish tacos I use as a staple there went overboard for presentation.  It was the culinary equivalent of DC's Emotional Spectrum of Lantern Corps. 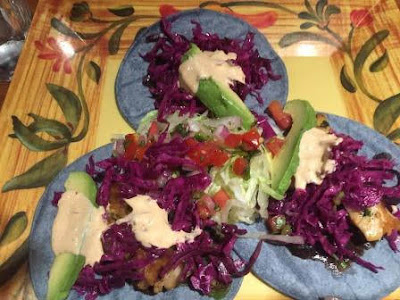 Rosa went to gamble a little while Anabelle and I rested in the suite (woo hoo!) Anabelle made a PowerPoint slide show to help us with future restaurant selection.  Since age two she’s always, “played hotel” well.  I nodded off a bit and we read some comics. (For any nerds following at home: Gaiman’s Sandman for her, Abnett and Lanning’s Guardians of the Galaxy for me.)

Rosa’s gambling was unusually unsuccessful, as they hid her goldfish machine.  Even so this only set her back  a couple of bucks as we are not of the high stakes variety guests.  If we visit an above normal number of times in a year, our comp dollars might net us a single lollipop in the taffy store.  She unpacked a bit, after family a quest to find the luggage lock keys.

The band on the owl ring, which turned out to also be a watch, snapped almost immediately. Since our multi angle suite view showed clearness in the sky, I was going to bring Anabelle back to the mall to replace it.

By the time we reached the Boardwalk, all clearness was gone and we battled through the S.S. Minnow damaging weather system, making it about half way to the mall before giving up and returning.

We started to head up to the room, then because we hadn’t zig zagged enough yet, went back down to get big pretzels.

Then we did return to the room, and its oddly sunny view.  I’m wondering if virtual windows were included with the suite. (woo hoo!)

I grabbed the stuff we realized we didn't need along with the list, and went to the parking garage.  They walked me part way, then took advantage of the insane weather changes to take a clear night walk to exchange the broken ring for the giant rainbow one. 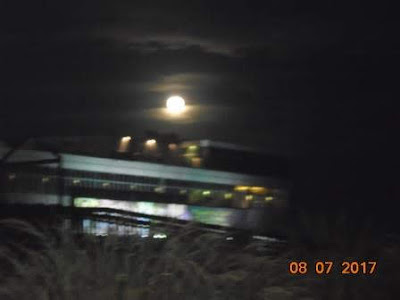 Unlike the previous year, where they made the last minute decision to stay all week after we got there, and I went home to work and resupply, this year was planned.

Let’s just say it was as planned as any non-Disney adventure we undertake.

Other time off I was going to take had fallen through, meaning instead of leaving them at the beach for two days, it was only one.  Meetings meant making it “none" wasn’t an option either.

Fortunately, I have a system.

Accompanied by several Diet Mountain Dews, and a stand-up comedy  playlist (Kip Addota, National Lampoon and Lewis Black) I drove up the empty parkway in mild rain having power bars for dinner.

Meanwhile, my wife and daughter had room service in a suite.  (woo hoo!)
Yeah, that’s fair.

I got home in the middle of the night, ready to pass into unconsciousness in order to be well rested enough to face work and the return trip the next afternoon.

That is, until I opened the mail and saw Shin Godzilla had arrived!  A man’s gotta have priorities.