A Fold In Time

I guess I’ve gotten behind in my viewing, with this being the first of three increasingly late film reviews.  Blame the flood of superheroes and dinosaurs (Woo!) in cinema. 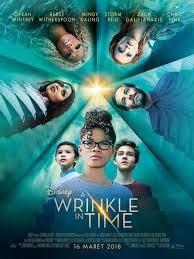 The title isn’t an error.  That would be a better name for this spring’s A Wrinkle In Time movie.

Wrinkles are uncontrolled, adding multiple facets, and unexpected forms to the substrate.

Folds are repeatable, organized and stable.

If I were sane, I’d likely lump this film in with Oz the Great and Powerful and Tim Burton’s Alice films.  It’s a new version of a classic story, the visuals are stunning, the story is well paced, and the actors do well with the material.

But I am not sane, and this book was a defining element in my personality as a child.

They took most of what made the  Madeleine L'Engle novel unique and replaced those elements with generic clichés frequently used in Hollywood.

For the second time, an adaptation has missed what makes Camazotz evil isn’t any weird properties, but a total lack of any weirdness.  It’s the evil of conformity without questions and mindless acceptance of everything having to be the same.

It’s the mundane-ness of the evil that made it more terrifying.  In the book, the fact that IT was a slightly larger than normal disembodied brain made it more of a focused nightmare than combining IT, the Black Thing and Camazotz into one giant, nebulous, neuronic tendrilly thing.

And IT is called “IT” not “The It” dammit.  Now you’re just making changes to piss me off again.

The player’s dynamic idiosyncrasies and interpersonal relationships and conflicts were replaced with standard after school special character types as well.

I will never be accused of being overly Jesusy, but one of the key and unique elements in the book was showing the compatibility of real, advanced science with specifically Christian religious beliefs, as long as neither is followed blindly, because the real evil is shown to be unthinking conformity.   The science was watered down, and the religion was more general spiritualism.

There was also the inexplicable substitution for gender swapping into a winged centaur with a sentient human female faced cuttlefish/ romaine lettuce hybrid.

Oddly, two of the best representations of sections in the book, the ant on the string and Aunt Beast, were in deleted scenes.

I don’t regret buying it, I still hope there will be sequels based on A Wind in the Door and A Swiftly Tilting Planet.

The changes and updates lose some of what makes the book unique, but in doing so allows some of the most important concepts to be accessible by anyone...

But I know I’m not alone among those the book touched in its original form wishing to one day see a completely accurate adaptation of it.