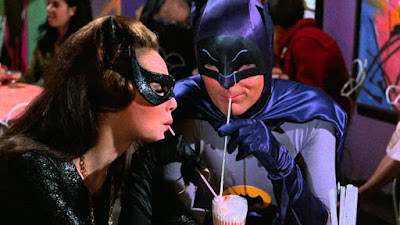 On Batman declaring,
when learning 3127 first years at Gotham City University
wear that size beany, “It’s a start:”
“No.  No it isn’t.”

On Catwoman’s tastes:
“I love how she brings her decorations from one lair to another.”

On Catwoman and her henchmen discussing using
the “Bell Remote” in Batman’s criminology class:
“Did you say something in this nearly silent room?”

On Alfred using the Bat-disguise kit to look exactly like Batman in a jail cell:
“This is weirder than the girl disguised as Robin in the first one.”

On the Dynamic Duo using the “Bat-Calendar:”
“That’s just another general computer they relabel every episode.”

On Art Linkletter in the window saying he can’t find unusual people:
“Have you been outside?”

On the reflections about those poor misguided students,
so drunk and restless:
“Let’s dump this acid on them.”

On the newfangled phone connection device:
“Why didn’t he turn the phone upside down like last time?
No they had to soup up a typewriter.”

On Catwoman’s lingering when saying, “Mr...Wayne:”
“Ooooh! She knows.” 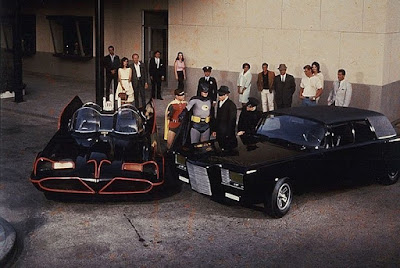 "A Piece Of The Action"/ "Batman's Satisfaction"

On The Green Hornet’s mask:
“It’s not a mask. It’s glasses.”

On Alfred telling Bruce it’s “the red phone”
in front of Aunt Harriet:
“Alfred has given up on subtlety.
Next episode- “Hey Bruce! It’s the Batphone!”

On recognizing one of Gumm’s henchmen
from another criminal organization:
Me- “It’s Alex Rocco! Moe Green in pink!”

On Roger C. Carmel in his first (of many)
disguises as an old British guy:
“Jesus. I wasn’t expecting that.”
On his Russian “disguise:”
*puts pillow over face*

On the Green Hornet’s car:
“The Black Booty?
That’s the perfect car for Butt Reid.”

On the “Enlarged perforating and coiling machine:”
"That sounds like where Batman and Robin
will be trapped at the end of the episode.
My trap sniffer is sniffing a trap."

On the name of Britt’s valet:
“Wait, his real name is Kato? That’s it?
What do people say when they show up?
‘It’s the Green Hornet and that guy’?”

On Batman correcting the Hornet:
“Whoah! Get wrecked.
Get em Batman. Woo!”

On Robin remarking,
“Good thing you brought the empty bat alphabet soup container:”
*Pauses playback*
“I’m leaving. "
*comes back*
"Why did he wake up and say, ‘I’m taking the thermos today.’?
And where did he fit it in that belt?”

On Bruce and Britt trading barbs about alter egos
“This one is up there.
Not as good as the Catwoman one with the singer,
but up there.”

On the Batcave’s alphabet soup dryer:
“They let nothing slip by.”

On Dick's helpful suggestion:
“Did Robin have a good idea?
That was weird.”

On Gumm ordering extra consonants for his soup:
*pauses playback again*
“WHY?!?!?”

On Gumm reversing Batman and Hornet’s secret identities:
“At least he has a bit of a clue. Unlike the Commissioner.”

On the city's huge stamp exhibition:
“Why is Gotham themed to one thing every day?”

On Gumm’s attempt to pass as Argentinean:
*whispers* “Wow. He is a master of disguise.”
*The Hornet recognizes him*
“Oh, thank God.”

On the theory being advanced that
the Green Hornet is really a crime fighter:
“Naaah…
They’re so dumb.” 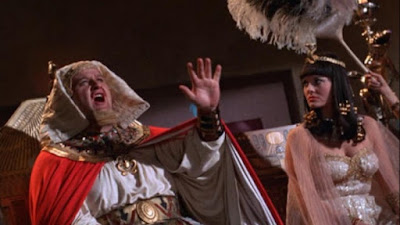 On my knowledge of classic comedy:
Me- “Victor Buono is in full W.C. Fields mode for this one.”

On her having read a Tutankhamun book
last year when they announced “1300 BC:”
“That’s about right.”

On Robin flouncing and flopping around
in his masquerade centurion garb:
“I love this show.”

On the cops being told to leave everything
at the scene as they found it:
“And they leave the guy in a noose.
What’s wrong with the Gotham police force?”

On Robin being knocked out by a door opening:
*pauses playback, leaves room*

On Grace Lee (Yeoman Janice Rand) Whitney being in the episode:
“I keep forgetting she’s in this. Because she doesn’t do anything.”

On King Tut’s insane, over the top Marc Antony parody
with toothache references thrown in:
*Stands and applauds* “Amazing!”

On Alfred exclaiming, “Holy steam valve!”:
“I don’t know why that was so funny but it was.
He even did the 'punch hand' thing.”

On Batman resisting Lisa (Lee Merriweather) with,
“My heart is already pledged to crime fighting:”
“And Catwoman...The real one.”

On budget saving near the end of season two:
“They used this set for the last episode.
Look, stamps!
There’s a Riddler thing there too.”

On the rapid transformation between Tut and the Professor:
“He’s like Captain Underpants.”

On Bruce deciding a man cannot live on
crime fighting alone and going
into Lisa’s apartment for milk and cookies:
“I’m never watching this ever again.”


Spoilers, she did watch it again
Click to continue to the end of season 2