The Days of YAYs!
Or
Feast ala Beast! 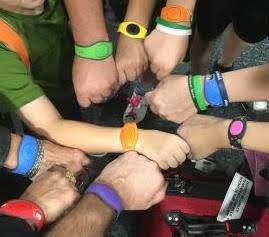 Our, once again sponsored by Grandma  -slightly older, but still large- mob returned to Disney World after near constant planning from the moment we left the World on our last trip.

Naturally everything went off without a snag.

No, of course there were snags, drags, misplaced bags, and all manner of issues…

But in the grand scheme of things, none of those matter, because we were basking in the awesomeness of Disney World together.
YAAAAAAAAAAAAAY!
Thanx Grandma!

Yes, "YAY" is now permanently only part of the Disney posts, with "woo" used on other topics, hence the first title,

I pulled off the pages from my daily Disney Animation calendar ahead of time because they were absolutely perfect for the trip.  Then, naturally, I misplaced them until we got home, so I’ll use them as headers for each day.

For those playing at home, the kids were entering the following grades:  Morgan- 2nd, Veronica- 6th, Aurora-8th, and Anabelle-11th.  The rest of us should be old enough to know better by now...

As a new feature of this trip for these electronically health conscious times, I recorded the steps taken each day. This will allow the non-Disney initiated to understand the scope of these efforts…and to provide documentation for the acceptability of me leaping off the cardiac diet wagon multiple moments along the way.

As a reference:
The last day at work before we left:
2.9 miles
6,987 steps
8 floors
(Only counting normal walking, I don’t have my phone on me when I exercise.)

The weekend day directly before we left:
1.8 miles
4,620 steps
10 floors
(Looks like a lot of running back and forth to the suitcases in the basement)

Finally, a hiking trip to Bushkill Falls after we returned, combining two of the longest hiking trails:
5 miles
13,389 steps
29 floors
(Yes, the Poconos are mountains.)

Note, step numbers and miles don’t look to be consistently related. Given that much time is spent rushing and an equal amount of time is spent slowly progressing on lines, I think that makes sense.

Comparing these to the distances we covered each day, two things will become clear.
A) Florida is Flat.
B) We are Insane.

But first, yet another delay in the form of an apology:

This time I tried something different with the pictures.
1) I only used my camera, to avoid having to search through scads of duplicates for "the good one" meaning the quality is mostly poor.
2) I picked the photos to use after I had my notes, but before I wrote up the trip, meaning the applicability is also mostly poor.

Perhaps I should avoid differentness.

As always, the links will go live as each post goes up weekly.

Index (Yes, the ala Beast’s will be explained... eventually.
Day 6 I believe)

Click here for other Disney Trips (after the 2013 index)