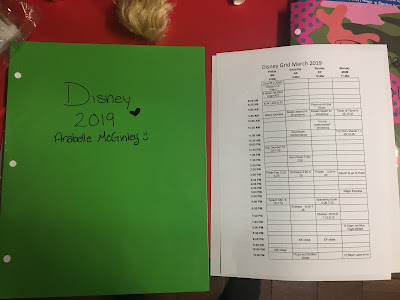 Feb 28, 2019
N minus 178
All (initial) closing times for our stay are posted.  My hunch payed off, Magic Kingdom is open later the second Sunday and also the day after allowing a hop after the Cinderella dinner for the end of the night if we want.

Notification to the family:
Disney World has (finally) posted the park hours every day we need them.

They always do some tweaking as time passes.  My biggest bet on a change is since the Magic Kingdom switches from closing at 9pm the first week to 10pm the second week on our second Sunday there (YAY!!!!) they will extend Saturday's closing time at some point.  (Doesn't affect us except as a possible crazy person end of the day hop to catch the night show.)

Since we can hop, I left the closing times of all the parks on the grid, instead of only the park we're in.

I did bold closing times, Extra Magic hours and shows of the park we're going to be in to make it clearer to see.

The Magic Kingdom parade moved from 3 PM to 2 PM.  That means timing the approach for the 2:30 castle lunch on Wednesday is going to take directional planning.

It also means something for the first day. I'm not sure what.  Last time we made it to the park at about 3 PM because we went straight to our 3:15 lunch.  Now we have a later 4:35 Plaza dinner, so with the earlier parade, we may be able to squeeze a FastPass in.

I stuck the most likely nights for the Electric Water Pageant in The Grid (two dinners in hotels it passes and the first night there the Kingdom closes before it goes.) As always, the timing of that is flexible and weather dependent, meaning we'll have play it by ear.

I'll keep an eye on the times here and there and update as they change.  Next big update in June for FastPasses.

(And shirts of course...can’t forget shirts)

March 1, 2019
N minus 170
Well, EpoopCOT.
Saw a listing on a site with more info than the usual one I use saying Illuminations runs until Sept 1.
We don't get to see the "History of old EPCOT music" temporary end of the day show.
Oh well, now we can use that time for rides 'n stuff!

March 4, 2019
N minus 167
Allears.net posted an article “It’s Not Walt’s Disney World Anymore, and That’s OK.” It lists all the changes to the parks with old favorites leaving and points out Walt quotes to reference how much he espoused the idea of change and growth, such as:

“Whenever I go on a ride I’m always thinking of what’s wrong with the thing and how it can be improved.”

“I can never stand still. I must explore and experiment. I am never satisfied with my work. I resent the limitations of my own imagination.”

“In this volatile business of ours, we can ill afford to rest on our laurels, even to pause in retrospect. Times and conditions change so rapidly that we must keep our aim constantly focused on the future.”

“There’s really no secret about our approach. We keep moving forward – opening up new doors and doing new things – because we’re curious. And curiosity keeps leading us down new paths. We”re always exploring and experimenting.”

I gave it the finger.

March 6, 2019
N minus 165
Mariachi Cobre in the Mexico Pavilion adds storytellers and a Miguel Puppet to tell the Coco story!  Ole!

A meeting for Anabelle’s school band trip, dubbed “the scouting mission” was held.  Her band director advised “stick it to the man” when it comes to the counter service meal coupons.  More evidence that the guy obviously knows Disney.

Because of overwhelming geeky fan clamoring, Disney has announced Star Wars Land is having an early partial opening in both parks.

Disneyland California will be in May, and MGM will be August 29,  the day after we leave!

As much of a Star  Wars nerd as I am (and I am a huge one) I did not want to deal with those people.

It may make it rough to get a late check out our last day, but hopefully it won't affect crowds too badly as most people will target going over Labor day weekend instead of the weekend before.

I'd guess/ hope MGM will be close to empty when we go that last Tuesday (Aug 27)  because people will be targeting the partial opening.
[Later Edit- More proof that with all the research I do, I know very little.]

March 8, 2019
N minus 163
Anabelle arrived for her “scouting mission” Band Trip in the Magic Kingdom today.  That means I drove her to school at 2:30 AM last night.  Here’s hoping at least she got some transit sleep before her amazing day in the Magic Kingdom.

March 9, 2019
N minus 162
Scouting mission day two: Anabelle performs at Disney Springs, how cool is that?  Then finishes the day Animal Kingdom, being the first McGinley to set foot in Avatarland.

March 10, 2019
N minus 161
Scouting mission day three:  Anabelle learns about being a professional player with Disney musicians, the coolness continues.  A high speed EPCOT Death March Sprint ends the day.  She informs us the flower festival fans are much more fun than the drunken mobs.

March 11, 2019
N minus 160
End of scouting mission at MGM.  I pick her up at school in the middle of the night for an all too fast return to non-Disney life.  Then again, no one in my family has a truly non-Disney life.  Her overexcited constant stream of talking about the whole trip to us at night is balanced by her total exhaustion the next morning.

March 19, 2019
N minus 152
“Awesome Planet” sounding a bit like the “Planet Earth” series movie will be in the Land Pavilion, I guess the Hakuna Matata film we never saw is begin replaced with a new film…we won’t see.  Rafiki’s Planet Watch comes back this summer with more Lion King theming, details pending. We probably won’t go there either.
[Later edit- We didn't. And the movie didn't change yet when we were there. And we didn't see it anyway. Our record remains unbroken.]

March 20, 2019
N minus 151
The “Walk Around the World” bricks in by the Magic Kingdom entrance are going away. Embarrassingly, Grandma and I can’t remember if we ever got one. We’ll have to check and see if we get a commemorative one.