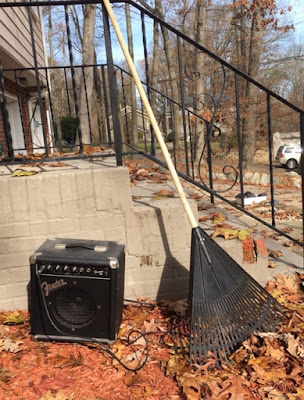 In spite of Siri both previously confusing others on my behalf and making me look foolish, she has been extremely helpful in maintaining my sanity during the most hated of regular home outdoor maintenance jobs- leaf removal.

This is because, unlike mowing or snow clearance, I discovered I could listen to music while raking and blowing the leaves. The temperature in leaf season usually calls for what my new neighbor referred to as “the coolest yard work coat I’ve ever seen.” It’s my old leather, motorcycle jacket that I couldn’t bear to throw out when it wore beyond being usable for anything but Halloween costumes. (While it never saw a motorcycle, it has been a part of multiple costumes!)  It has an inside pocket that lets me reach the controls for adjusting the volume.  I can’t reach the “skip song” button, but since it is a mostly thought free activity, the inclusion of a couple of numbers I’d usually pass over isn’t that bad.

Though there were a couple of sessions where Siri obsessed on albums full of those normally avoided tunes to see if she could get me to dislocate my elbow reaching into my own pocket. Frankly, I find including an undeleteable U2 album on everyone's account cruel and unusual punishment.  However, in general she behaved herself up until recently.

Due to the mindlessness of the task, and my knack for prop improvisation, I can’t blame her selections for me getting visibly a little too into the music from time to time.

Obviously, a rake shares the general profile of a guitar, so joining in "air mode" on a rockin’ lead solo* by Jimmy Page**, Glen Buxton, Most of Five Year Mission except Fark the drummer, Chuck Berry, Nita Strauss, George Harrison,or Steve Vai is completely understandable and expected.

*Music Note 1- It has to be lead guitar. Even instruments I have a stronger emotional connection to don't work, with minor exceptions.
A)  Tina Weymouth's or Gerard Casale's bass lines
and
B) Lee Jay Thompson's saxophone riffs.
One would think that Elton John, Fats Domino and Little Richard would inspire some "air piano" but I don't seem to be genetically wired for that artificial instrument.

**Music Note Two- Since I always use two rakes to allow scooping action, I can pull off Page's double necked live performance on "Stairway."

***Music Note Three- Actually, I'm more of a Jan and Dean fan, but the Wilson's played with them a lot, and  "random surf guitarist in the studio" messed up the flow.

****Music Note Four-   Of course I'm kidding.  As someone who graduated from high school in the late 1980's, I am legally required to have the complete Back in Black album on at least one playlist at all times.

Granted, my tastes in music are highly varied, lending the rake improvisation moments to  mimic non musical instruments from time to time.

A chimney sweep’s broom during “Step in Time”

A cane during “Pure Imagination”

An Atlantean broadsword during “The Anvil of Crom” or any of the epic Conan the Barbarian soundtrack, really.

While, I suppose, some of the more pedestrian types might consider these moments clear examples of public embarrassment; as a juggler used to making a fool of myself in front of large crowds they are merely methods of relieving the back braking dullness of yard cleaning.

The issue that arises is connected with my singing...

Or more accurately: my complete lack of ability at singing.

This is not counting the multiple times I roar, Skreee-OOOONK or bidibidibidibidi along with the sound effects on my huge collection of Godzilla soundtracks. Surely the neighbors have come to expect this by now.

I guess this is as good a time as any to point out this also is not counting the screams coming from the moments I accidentally catch the headphone cord with the rake handle and nearly hang myself.  Surely after hearing my arguments with the snow blower, the neighbors have come to expect this as well.

Normally, I can adjust the playback volume appropriately, using the battered leather jacket storage method and shift my personal volume along with it.  With the blower going, I know I can do what passes for vocals at about speaking level and have it drowned out. Then, when the decibels are turned down for raking and hauling, I mumble more than usual to keep the expression of lyrics under my breath.

Once again, there are some exceptions.  It is nearly psychologically impossible to not go for it in full for any track from The Greatest Showman, or most Harry Belefonte numbers.


Siri’s malicious streak has risen to the surface during the final clean up, when I am too strained, dehydrated and exhausted to care.  At this point I neglect to adjust the play volume off of “leaf blower” level while I sweep the end of the driveway and put the equipment away with the songs echoing in my ears.

Although I’m pretty sure there was a bit of rotten intent earlier in the work one day, when the song crescendo perfectly coincided with the blower plug falling out in time for me to belt out, “I AM MOANA!!!!!” across the front lawn.

Anyway, Disney princess pride moments aside, once that “too tired to care” home stretch hits, I’m usually reveling in the joy of being done and absent mindedly singing along to whatever Siri cues up.

I knew she had it out for me one fall afternoon when only the timely closing of the garage door as the introductory musical bridge ended shielded the neighborhood from my rendition of “Little Black Dress” from Shock Treatment, the secret sequel to Rocky Horror.

Unfortunately, she bided (bode? has been biding? beedated?) her time until I forgot about that.

If she fulfilled her role in this joint endeavor, she’d have continued to end the yard work days playing culturally acceptable rock and roll classics, or family friendly Disney tunes.

Heck, if she really had my back, she’d finish up with rousing, but wordless instrumental soundtracks, which account for much of my playlists.

As I called upon my final reserves of energy to rake the last bits off the edge and wandered up and down my entire driveway coiling up the extension cord, I found myself thoughtlessly joining in to the lyrics blasting in my ears. They came from one of the non-title tracks on my recently acquired technological update of the Barnes and Barnes tunes I have on their classic  Fish Head shaped album- 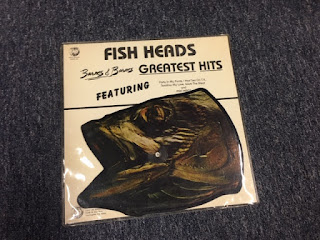 “There’s a party in my pants and I want you all to come. Vooh Ba, bada-da bop! bop!”

We may have to move.

Email ThisBlogThis!Share to TwitterShare to FacebookShare to Pinterest
Labels: joys of homeowning, music