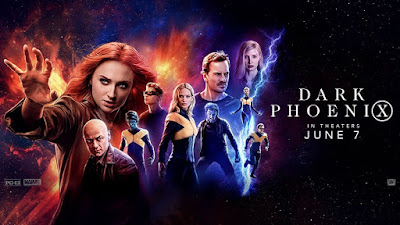 This one is late with good reason.

My daughter and I are in full agreement on this outing as much as we agreed on the last overall X-men film…not with that high level of praise, however.

She summed it up perfectly with one word - that works equally well to cover the entire film-  during the HUGE action scene:

Note- We are not a tough superhero audience.  She loves X-men: The Last Stand,  I’m a big fan of the Ghost Rider films and we both like SuperInfraMan.

Picking this point to show Charles’s manipulative side from the comics was part of it.
“I’m getting such an education in this film.” Is how Anabelle described it.

One of the main issues with that is Micheal Fassbender is already massively charismatic as Magneto.  With Charles turning darker, it makes his supposed dark reflection much easier to identify with and prefer.  Or as Anabelle put it, “Why don’t they all just go stay on his [Eric's] island? He’s the sane one now.”

Falling back on the old Marvel trope of “Super powerful woman doesn’t have the emotional stability to control herself,” probably wasn’t the best idea either.

I know it follows the original comic book story, but they did that one already with the previous cast and it almost tanked the franchise.  It is a weird choice overall.

While her above line was the best description, she had a good second place statement as the credits rolled:

“That was one big pile of meh.”

Nightcrawler was fun, as always.  Quicksilver was as awesome as he’s been in the X films, until he was taken out for most of the movie.  Yes, it suffered from the classic, “We better get rid of the speedster or the film will be ten minutes long,” syndrome.

Phoenix, who was the star in the title, alternated between whining that she couldn't handle her power, and exploding.

On the positive side, the last time the X-franchise floundered, we got the three awesome First Class films before this one, the start of the Deadpool run and the second and third excellent Wolverine films.

Here’s hoping the transition to the Disney Marvel Cinematic Universe will maintain the levels of epicness we’ve come to expect from them.

Lackluster is the perfect word for it.
At the climax there's an exchange something like
"Your feelings for your friends is your weakness"
"No, it's my strength"

Where did that theme come from? it's generic or as Lars from Metallica would say, "Stock"

Yeah, at least earlier in the franchise, when it went bad, they were still going for it full blast, so you couldn't complain about a lack of oomph.

The reverse of that lie was an awesome Emperor moment in Return of the Jedi, here it just kinda wilted.