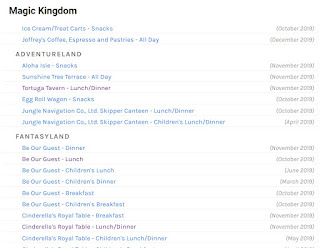 For the first time in my Disney World planning posts, here are the jokes, gags, and pointless comments interspersed around the menu offerings I distribute to my family.

Since they change constantly, I'm sure most of you don't care, and its already far too long for one post, I replaced all the actual menu listings with the word "list" and only left in the "jokes" such as they are.


Here’s the menu list, which will probably change again before we go.


But since Grandma and Anabelle have so much fun with it, I’ll make it up again anyway.


As always EVERY MENU, with updates and pictures.


Is available on line here

Changes to the meal plan from last time:
Counter service does not include dessert, but there’s an extra snack for more flexibility
So you CAN get dessert with every counter service, and have the same amount of snacks as before, but you don’t have to, and can then have more snacks.

The plan still includes the resort refillable RF chip mug for everyone and includes for each person per day:
ONE table service  (Entree, Beverage Dessert- or Buffet or Family style, or whatever other way they specify “eat till you explode”)
ONE counter service (Entree, Beverage)
TWO snacks (Marked with the little “Dp”purple square thingy)

For over 21, the beverage can be alcoholic now where available.
I’d pay attention to the roller coaster and similar spots on the grid when considering this option.

Kids (Under 9, which I think is only Morgan now, crap I'm old) must order from children’s menu where available. Past experience has been that only applies to table service, not counter service, and so many of them are buffets it comes up less than you’d expect.
Then again, when Anabelle was 5 she only ate sprinkles, icing and bacon, so I didn’t really pay attention that time.

Changes to my crazy need to do this from last time:
I will list only the table service (and one booked counter service) meals first, rather than trying to guess where the heck we’ll eat in between.  Then I’ll list a bunch of likely counter service by park for reference at the end.

I trust you people to be Disney enough by now to know which characters are at which meals, only food is listed.

Prices don’t matter, but it's a pain to delete them all.  You can just ignore them, or use them to “Stick it to the Man” as Anabelle’s band teacher said.

Sometimes the description repeats the title which are now on the same line because I’m trying to avoid making this infinite  pages. I'm telling you now so it should only a little confusing when you see that.

Sunday August 18 Magic Kingdom
We’re getting up at Stupid O’clock (again), and have nothing booked till dinner.
EAT BREAKFAST AND LUNCH!!!!  AT HOME, IN THE AIRPORT, IN THE HOTEL, IN THE PARK, SOMEWHERE!!!!

Plaza Restaurant 4:35 pm
Why mess with a good start?
aaaaahhhhhhh.

Beverages
List regular and alcohol
Beer Seasonal Draft Beer a Scandinavian beer to make your traditional "Skal" memorable
Wine Sparkling Wine, White Wines, Red Wines
Beer and wine is like this most places, I’ll only put the special ones.

Buffet- Children may include peanut butter and jelly sandwiches, corn dog nuggets and macaroni and cheese.
They can eat the real food, don't know why they split this, especially when we’re all hitting that corn dog table!

Thursday August 22  MGM
LATE LUNCH- SNACK TO AVOID CRANKYNESS!!!!
Sci Fi Dine In Theater (I have no idea what the MGM sections are called, it’s tiny, we’ll find it 1:35PM)

Beverages
They have them

Be Our Guest New Fantasyland (Counter service reserved) (11:50PM)
I really need to call and see how we can all order online without messing up one room’s meal count. I’ll do that.
[Later edit- You can't.  foo.]

Kids, food with more fun names!
list- including the soon to be famous, "Feast ala Beast"

Beverages
Yes,there are many, regular and alcoholic.

Beer- Yes, and wine too. How about that?

A LITTLE LATE LUNCH, BUT FAR ENOUGH IN THE VACATION THAT SNACKS WILL BE NEEDED TO AVOID CRANKINESS AND /OR PASSING OUT

Entrees:
list
(I think there’s pork too, this listing is always a little flaky)
[Later edit- there wasn’t. I am also a little flaky.]

Desserts
Short Cake , Topped with Berry Compote with Whipped Cream
(that should be singular dessert, shouldn’t it?)

HOLY CRAP IS THIS LUNCH LATE. EAT SOMETHING FOR THE LOVE OF GOD!!

Cinderella’s Castle- right smack in the middle of everything, duh (2:30 PM)

Appetizers/Starters (pick one, or share, I forget. Don't worry, you’ll eat.)
[Later edit- it was pick one, and I was right, we did eat]
list

Desserts (for all or pick one, or something)
[Later edit-It was pick one as well]
list

Beverages
Quite a few.

No table service booked in park.  Forage as needed.  DINNER IS LATE, “AS NEEDED” IS A LOT!

Beverages- none listed, but surely they have them. I’ve drank them there.
[Later edit- They did, including raspberry Pina Colada’s
and a heck of a mai tai- yay!]

No booked table service. Everyone will be very worn out.  MUNCH FREQUENTLY, BURN UP THEM SNACKS!!!!

Children-friendly Favorites (you know the buffet drill by now…)
list

Cosmic Rays in Tomorrowland, Yay Sonny Eclipse!
[Later Edit- he was broken. I am still sad.]

Soup/Salad
Greek Salad with Chicken feta, tomato relish, banana peppers, and kalamata olives tossed in a Greek feta vinaigrette dressing $11.99 (or without chicken)
There is no soup. Ray lied to you.

Beverages
You betcha! No alcohol though

Beverages
Here too , still no booze, may be Magic Kingdom counter service thing.

Pecos Bill's- Frontierland  Staved off Crazy Hungry on Many a Trip

Beverages
Oh yes they do.

EPCOT
Future World
Sunshine Seasons downstairs in the Land under the balloons, A RIDICULOUS AMOUNT of choices.
They have everything, meat, fish, snacks, fresh baked goods, alcohol. It’s insane and will make this file way too big.  But if we need to eat and aren’t munching to sustain an EPCOT Death March, we’ll be here.

WORLD SHOWCASE COUNTER SERVICE SUCCESSES.
They all have beverages, of the normal and inebriating kind!

Germany Sommerfest- saved me from hunger based insanity once.
lists
Pretzels in a separate cart, easier with new meal plan.
[Later Edit- They were so big they didn't count as snack credits. Dang!]

China- Lotus Blossom Cafe- Ya know it, ya love it!
lists

Beverages
Wouldn’t be EPCOT without em!

Beverages
Oh sweet Jesus you have no idea!

There’s a zillion places to eat.
Over on Sunset is a fleet of Kiosks that have just about everything, pizza, Mexican, standard American grill and a couple others.
For a nice sit down there’s the Commissary (on Commissary Lane no less) That’s where the Ribs are, honey.

I'm sure you’ll find something.

Sorry, its late and there’s a crapload of places in MGM  with small, specific menus.
I just deleted the last whole menu three times, and they keep changing special fancy character dessert items on me anyway. You’re on your own. I’ll be there to help.

Africa has African food, Asia has Asian food, Pandora has weird Asian crap pretending to be alien food. Dinoland has burgers hot dogs and chicken sandwiches. Pizzafari has (anyone…anyone???) PIZZA!!
Same issues with changing fancy desserts as MGM. Will all the Lion King pastries still be there when we go?
I have no freakin idea.

Here’s the only really important one for pre-visit mouthwatering anticipation:

Flame Tree Barbecue on Discovery Island
Lists Including:
Ultimate Barbecue Platter house-smoked brisket, pulled pork, chicken and ribs served with coleslaw and beans $22.99 (Its everything! Woo!)
[Later Edit- It was discontinued the day before we left…alas.]

Side Dishes
List including:
French Fries with Pulled Pork and Cheese $6.99  (This is a side? I may retire here)

Beverages: Not quite as many as EPCOT but still dang impressive.

[*old Jewish man voice*]
They have sooooo much food!
With the choices, and the freshly made, and the prepackaged, and the daily specials that change all the time.
Go…
Eat…
Enjoy…
You’ll be fine.

Oy, do I need sleep.

I like the Jewish old man voice part the best.

Thanx for reading and sharing. That's about the proper energy level when I reached the end of this exercise.