Rise of Skywalker: The New Blood 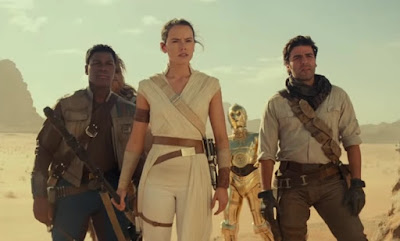 Spoilers in this one- for a spoiler free review- click here please:

With the old gang out of the way (a possible point of contention, of course, is how they're out of the way) it’s time to talk about the new main characters.

I’ve been putting this off because I'm still not completely sure how I feel about this film, and in fact, this trilogy.

That is, I’m not sure how I feel when I’m not watching it.

Therefore, though the new films took away the happy endings for my Star Wars gang from after Return of the Jedi I guess it succeeds on the level it is supposed to. 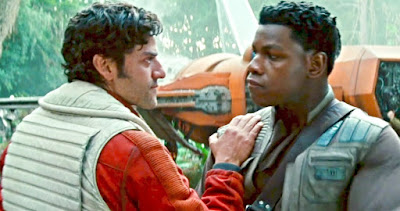 As for two of the sequel trilogy main three characters, Finn and Poe really completed their character arcs in the previous film.  Not counting his surprise darker back story in this film, (likely included out of plot necessity) Poe learned about big picture strategy over immediate tactics.  Finn learned there was more to existence than revenge after defeating his former commander, and found the value of life on the good guys' side.

Leia’s passing pushed them both to accept the responsibility of where their characters have already ended up.  They use their established skills, Poe as a Starfighter pilot and Finn in ground combat, to lead the Resistance from the front in battle. I’d like to think it was a change in director's visions and plot that led Rose to being sidelined, and not caving in to jerky “fans’” ideas.  She was promoted to head of the engineering corps, but remained in the background.  It would have been cool to see an Apollo 13 kind of scene where she took point, working with Dominic Monaghan's and Billie Lourd’s characters to guide the front line fighters through a repair or technical puzzle, wouldn’t it? 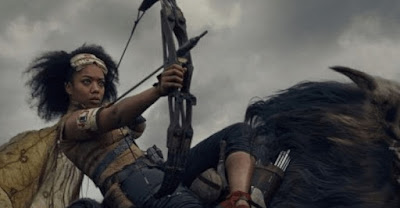 Rose was basically replaced with Jannah for the action, swapping out the idea of a “Star Wars fan” being pulled into the fray with the idea of Finn not being the only Stormtrooper that defected, allowing him to be an inspiration for them.

I have to wonder if everyone Finn meets falling at least a little bit in love with him is due to him unconsciously using a “Jedi Mind Trick” since it's been confirmed (based on context clues in the story itself, and the director saying so after the fact) that he is Force sensitive. 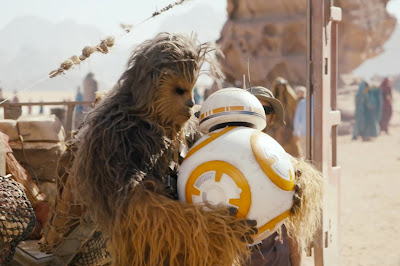 Before getting to the complicated part, how about a big hand for Joonas Viljami Suotamo!  His lessons from Peter Mayhew clearly paid off and he embodies Chewbacca perfectly in the three movies he's taken point in the role. Here’s hoping he continues to bring the Wookie to life for years to come.

Now, let’s get to the three headed Bantha in the room shall we?

Rey,
Kylo Ren,
And the return of and their connections to Emperor Palpatine.

First off, I did like the Rey and Kylo dynamic. They both had great power, they both had anger issues, they both had crappy things happen to them, but they way they reacted to those things was in diametrically opposite directions turning one into a hero and the other into a villain. 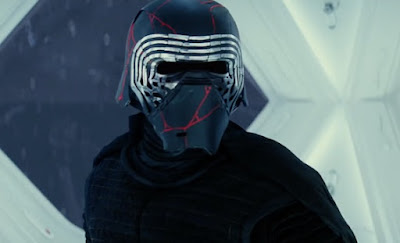 Starting with Kylo Ren, I was perfectly invested in him becoming the main villain of the trilogy.  He turned down any hand offered to him, and transformed from a Vader wannabe to his own version of a dark, ruthless and ambitious leader of the First Order.  I would have enjoyed seeing him develop into the formidable foe the Resistance had to take down in a final battle.

However, it was cool getting a short glimpse of what a Ben Solo on the side of right, raised by Han and Leia with training by Luke would have been like, if only for a brief bit following his turn.

Note, I say “turn” not “redemption.”  He did a bunch of really heinous stuff, both on personal and massive scales.  Deciding he’s going to be good going forward didn’t redeem all that.  It put his actions at the end of the film on the right path, and one can only assume his mother lingering before becoming one with the Force at the same time as he did pulled him through. I expect he’ll be spending a chunk of time in “Jedi Purgatory.”

The whole reason we can see any of “Good Ben” is bringing back the Emperor as the ultimate in insidious influence and galaxy crushing darkness.

How did he survive?

I have no clue. 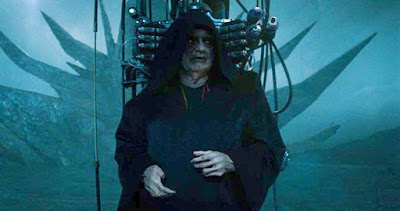 But with Ian McDiarmid playing him again, the character exudes the true manipulative evil he always has.  Showing Snoke to not be the mastermind behind the First Order that Kylo supplanted, but only an organically grown puppet of Palpatine changed the overall dynamic further.

Having Rey be the Emperor's granddaughter is almost an un-twist, since Star Wars using “No…I am your father,” was such a mind blowing twist at the time, everyone expected something similar this time out.

Rey overcoming an origin tied to the ultimate evil doesn’t really change her character arc from overcoming an origin tied to being a nothing.  Plus it explains why she’s one of the few heroic characters with a British accent.  There had to be some link to the Empire there.  (I was hoping for an Obi Wan- Duchess Satine connection, but unlike some viewers, I can accept and still enjoy it when the story doesn't go the way I hoped.)

Palpatine’s plan may shed some more light onto the whole “rule of two” the Sith have always obeyed.  Honestly, it always struck me as foolish.  At face value, it is a belief system almost guaranteeing that the Master would abuse the Apprentice, therefore leading to the Apprentice wanting to kill the Master as soon as possible. Why would anyone take an official Sith Apprentice, knowing  that “rule of two” will unquestionably end up putting them in the cross-hairs of their heir.

In this film however, when the Emperor tells Rey to strike him down, he explains that through her hatred, he and all the Sith will flow into her, and he will (or technically, they will) be in her mental driver’s seat.

Now the rule of two makes sense.  The Sith don’t become one with the Force like Jedi; they continue inhabiting the body of their Apprentice when they become the new Master.

The Sith Lord is picking not his successor, but the form and powers he and the Sith will continue to exist in.  No wonder Palpatine was so keen to have  Luke replace his massively prosthetic-ized father.  I have to believe there is some element of control going on as all the Sith begin to muscle in on the mind of the Apprentice.  This makes the hairpin turn to good actions of Vader and Kylo a little clearer in the grand scheme of things. 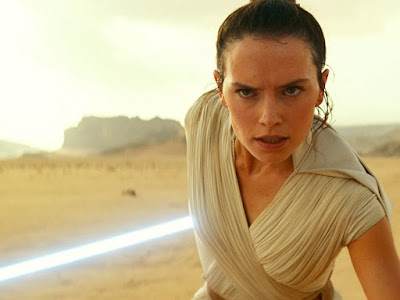 For Rey, the main hero of this trilogy, being descended from the ultimate Sith does provide explanation why she is so strong in the Force. Family Force ties have been a central point of most of the Skywalker saga.   Renouncing that connection by choosing the name Skywalker at the end based on those who took her in and trained her is a fitting conclusion.   Even with them gone, she is clearly part of a family now.  Returning Luke and Leia’s lightsabers to Tatooine is a symbolic and cool way to end the saga where it started.

Aside- My favorite fan suggested surname for her is still, "Sistance," because I'm still emotionally seven years old.

However, she shows no sign of cleaning up the old Lars homestead, which is uninhabitable. She’s in the Falcon, which belongs to the whole Resistance at this point, and is with BB-8, who is most closely tied to Poe.  Once her task is complete she’s going home to the people who’ve showed her love and support.

Why she kissed Kylo, I have no idea.  (Again, other than to satisfy “fans” who were pissed that Ben Solo wasn’t the star, and who ignored the fact that -with the exception of helping her fight twice- every other interaction between them was him attacking her.)  I read it as a “Hey, thanks for not being evil anymore and sacrificing your life force to bring me back from the dead,” kiss, as opposed to anything romantic.  J. J. Abrams comparing it to Luke and Leia’s kiss in Empire is not helping matters. 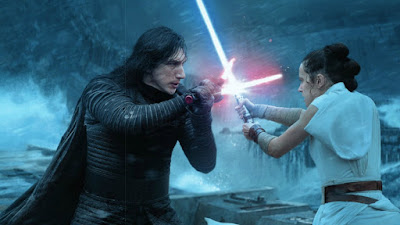 Even with the family explanation of her Force strength, she is still inexperienced and succeeds only with help from others this time around.  (Beating Kylo when he’s distracted by Leia, as opposed to the last time she beat him when he was injured…Beating Palpatine with help from Ben, and the voices of the past.) This is her whole story: going from an isolated scavenger when we first meet her, to the holder of both the Jedi and Skywalker legacy, connected to a large group that loves and supports her.

She really succeeds by following the Jedi tenants of compassion and defense.  After running Kylo through with his own lightsaber, she shows compassion and heals him. Without his aid, she couldn’t have defeated the Emperor’s forces.  And she beats Palpatine, not with a direct strike, but by using the lightsabers of those who trained her, and the strength and courage imbued by the voices of pretty much every Jedi we’ve met in the films and on TV (THAT WAS SO COOL!!!!!! WOO HOO!!!!) to reflect his evil back on him. Concluding the story as she gazes at the twin suns while the force theme played was a nice bookend.  What was a cooler bookend for the nerdy seven year old who surfaces to enjoy all of these films was igniting a hand made yellow lightsaber, the same color as the original Luke Skywalker action figure’s. 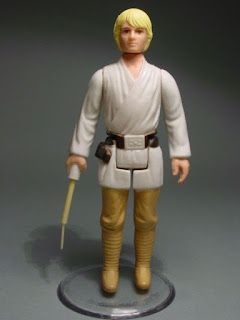