Up the Lake Raft Battle Part 1

When I posted the newest Up the Lake tale I was looking to link to a detailed reference to “the weeds” I knew I had written.  After digging in ancient folders I learned I never posted this long lost tale.
Sherman, set the Wayback machine for Labor Day Weekend Up the Lake, 1997.
N-joy!!! 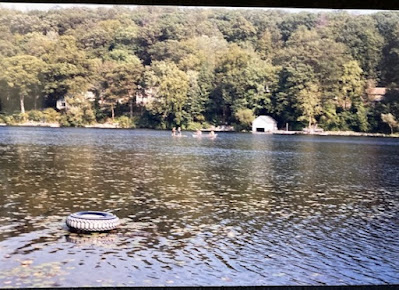 Mediocre Moments in Naval Warfare
Or...
Not to Be Used as a Flotation Device
Trafalgar...Hastings...Midway...all famous and memorable sea battles.
None of these however can compare with the sheer oddity of the inflatable raft duel which took place early September, Up the Lake.  The weekend almost seemed like it would go by without incident.  Miraculously, there was an event where three bee-bee guns and a slingshot were being used simultaneously without a single near fatal accident.
Click here or here for the early volumes of the upcoming series “Up the Lake BB Gun Disasters - Volumes 1 -359."
On Sunday afternoon, the last full day of the true summer, the Lake had reached its end of the season temperature brought on by frigid pre-fall mountain wilderness nights.  The cold water caused instantaneous numbness, cramps, and rigor mortis upon diving under the surface.  Therefore, I elected to stay on shore and peacefully read Sun-Tzu while all the kids, natrually immune to frigid swimming conditions,  were in the water.
However, as it was the final weekend, a medium sized horde of Bronx born Italian families descended on the beach to see each other before the place closed for the year, and discuss all the stuff they used to do up there back when they were physically able.
Apparently, every Italian in America can trace their lineage to a four block neighborhood in the Bronx.  Due to the sound of the constant boiling of gravy, frying of meatballs, and impacting of wooden spoons on children’s heads, everyone on those blocks had to talk at maximum volume to be heard.  Due to practice and genetics, even in the peace of the woods, this volume level of speech remained. In fact the only way to differentiate true yelling from conversation, was that the teeth were clenched during yelling, actually lowering the volume.
After reading the same sentence for the fifty-third time, I decided that Ancient Chinese Philosophy was no match for Middle-Aged Reminiscing Italians, and went for a swim.  After the initial “sneak up under the raft using fins and scare the heck out of the kids” which is expected and served as a recognized greeting,  the battle lines were quickly defined, and the war began out in the deep middle of the Lake.
Aside- For many years, no true definition of the depth of the center of the Lake was recognized.  General legend was that the cold, spring fed depths were “bottomless” due to it being a filled in prehistoric volcano.  Later, non "Up the Lake Side of the Family" maintenance workers used an electric fish finder (clearly establishing themselves as “cheaters”) and claimed the depth was somewhere between thirty and fifty feet.  Since they were clearly unromantic poopyheads, and not “of the body” we true Up the Lakers did not accept the accuracy of their equipment’s output and maintained the “bottomless” definition.
But now, back to the Battle of Labor Day Weekend.
The attackers were: Joe and Joey (both around 9) led by a theoretical adult.
The names are no coincidence. One of the other side effects of having this many traditional Bronx descended Italians, is that Up The Lake had more “Little Joes” than a Bonanza marathon.

The Joes team shared two flat green “attack rafts”, fast and maneuverable, but unstable. Translation, they would often flip when an occupant tried to react to my approach, well before I reached contact distance.
The rafts also had a tendency to be slippery, meaning that one second the kids were paddling along at top speed and the next a Little Joe was shooting into the lake like a rocket powered penguin off of a greased bowling alley.
Our team under siege consisted of Ashley (Joe’s older sister) and Valerie (age seven), sitting on a “Battle Platform” raft.  This behemoth resembled a floating king sized bed, and was made of two compartmented, inflated sections, plus arm and head rests.  It was very difficult to flip and fantastic for travel around the surface of the Lake, providing there was no specific direction desired, and one had an infinite amount of time to get there.  I acted as their defender/ engine/ torpedo as I was swimming with the aforementioned fins on.
Thanks to:
1) No gas motors allowed in the Lake,
2) A good pair of fins,
and
3) My big ole feet,
Discounting a canoe, kayak, or old lady who saw a snake in the water, from my late teens until well into my thirties, I was the fastest moving human over short distances in that body of water.
Their theoretical battle plan was straightforward:
One of the Joe’s swam straight ahead at the Battle Platform while their “leader” and the other Joe flanked (flunk?) around both sides on the Attack Rafts in a pincer maneuver.
My mission was to toss the swimming Joe back, then dive under and speed towards one of the two pirate rafts and flip it, followed by reversing course to the other one while the girls kept look out from the observation deck on the Battle Platform.  This was to supposedly coordinate the defense, and fend off any raft that got too close.
If our tactics were better, the pirates all ended up in the Lake, broke off the attack and pulled back to regroup.  If their tactics were better, the monstrous raft got flipped and I “finned” the girls away to right the Battle Platform, and prepared for the next assault.
Out of the 7352 sorties run that afternoon, the battle plans were followed twice.
Click Here for Part 2
Up the Lake Index
Posted by Jeff McGinley at 2:00 PM


Also - Depth of the lake when measured with a water level indicator was approximately 70 feet at the deepest part. Probably cheating as well, but it was entertaining watching all the Italians wonder amongst themselves "Why the hell is that weird guy duct taping a chunk of rebar to that f*****g strange tape measure?" in what I'm sure was supposed to be a whisper, but which I am pretty sure I heard twice, from the echo coming off the mountain on the other side of the lake.

and for the second part:
"I'm sorry I do not speak your language."