Up the Lake- Sports Part 2 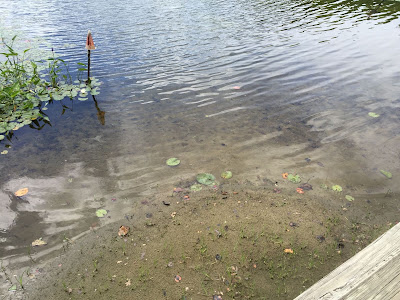 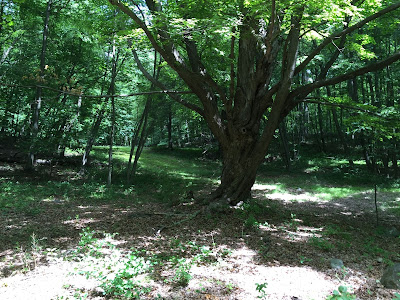 As for Up the Lake locations, there was a volleyball net permanently set in up in the second field, which we used only about once a summer for volleyball. Instead, it was a key element in two other physical activities:
The first was being the completely out in the open (and much harder to guard than the rock in the pines) Base Location for Capture the Flag.
The second was as an Ultimate Warrior level self-inflicted clothesline from running into it at full speed when playing “how long can we keep the owner looking for who’s sneaking around in the fields tonight without getting caught.”
Aside- My minor contact with another sport, tennis, came via a volleyball game, but not in that field.
The tennis lesson came when Nick’s sister Janine set up a volleyball net in front of their cabin one summer. She then organized a large number of us into a game using tennis rules.  Since she (and her kids) were the only ones who knew those rules at the time, how they worked did not appear immediately clear to anyone without PhD level mathematical degrees.  Somehow, after playing for a spell, our side was down 30 points despite our missing the ball only twice and them missing it repeatedly.  I think it was based on who served, the word “love” and the current angle between the two largest clouds in the sky at that moment.
The “sport” I brought in, I had heard about from a stoner, Mainer college friend, Lucas. It sounded like the perfect activity for our insane summers.  The way to bring it in was easy, I described the chaotic and violent sounding activity of "Buffalo" to Joe, and waited for him to get excited about how he could position himself to inflict maximum bludgeoning on the rest of us.
The short form of the rules of “Buffalo” is “Full Contact Red Rover.”
There’s no calling out colors however, or wasting valulable body crunching time waiting for anyone to “come over.”
One person, who gets more enjoyment out of mayhem than self preservation, starts in the middle of the field as “It.”
Then with no warning, other than screaming like lunatics, (which may be optional, but not for us Up the Lake folks in virtually any activity) everyone else tries to cross the field at full speed.
If “It” can immobilize someone, using the same absolute definition of that as we did in football, that person then transfers to “It”’s team and tries to stop the others on the next screaming, charging pass.
Since everyone else there was younger and smaller, Joe naturally grabbed the “It” role and started power bombing youngsters into the turf to add to his squad.
On an early pass, Geoff- using the same reckless abandon for his own physical well being that he’d displayed in leaping fifteen feet out of a tree during a Manhunt game- decided he was going to stop me.  With about a quarter of my body weight at his disposal, he set himself against my charge. I ran in, leaning down like a nerdly rhino, raised my shoulder on impact, and bodily lifted him up and back about the same distance he cleared from his tree jumping activity.
A couple of passes later, Little Rich set himself to try the same thing, with a larger weight disadvantage.  Rich is cousins with Nick and Skip however. Therefore, via nature or nuture, had a slab of deviousness in his genetic makeup and / or training.
I ran in, leaning down like a nerdly rhino, preparing to raise my shoulder on impact. At the last minute before said impact launched him skyward, he dropped and rolled into a “duck and cover position” bowling into my ankles. I flew about as far as Geoff did as I was launched skyward.  Once I laid prone in the grass for a while to assure all my limbs were still attached and functioning, I joined the “It” team.
By the end of the evening, we had once again completed yet another night where everyone was rolling around in the field moaning and groaning, but laughing with a mixture of happiness and insanity.

Email ThisBlogThis!Share to TwitterShare to FacebookShare to Pinterest
Labels: Unathletics, Up the Lake

Hey Jeff. I read your up the lake sports. Funny story. Even funnier is yesterday I was trying to remember what your shirt used to say that you wore up the lake. I remembered it was like a baby blue shirt with dog and chair on it. Than today I came to my sister Daune’s house to celebrate her birthday and she mentioned you had something on Facebook about the lake. I don’t do any of those web site things or social media types so I typed in what I could remember what your shirt used to say and I found your blog. Small world. Within 24 hours I found the answer to what I tried remembering what your shirt used to say. Great fond memories Jeff. It’s easy to forget that the lake has that ability to leave such impactful memories for all the campers that were blessed to say they had a cabin up there. Our grandparents gave us such a treasure. Thanks for the walk down memory lane..... Geoff.

Hey Geoff, glad you found it. Up the Lake magic still exists. We certainly all were blessed having the Lake to share for all those years.

If you click the index link at the bottom it goes to a post with links to all the other Up the Lake stories I've written. You figure heavily in a few of them.

Thanx for sharing the times.