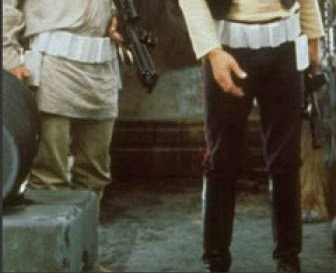 A long time ago in...
October of 1998.
Before the internet really got rolling, people would e-mail funny lists around.
My sister sent me a collection of-
"Star Wars quotes that are improved by substituting the word 'pants'."
Yes, these were simpler times and between the insane glut of stand up in the early days of cable TV, and the expansion of the meme brokers of today's social media, we were starved for comedy.
Naturally, I had to make up my own additions to the list.
More naturally, I've gotten behind on my posting and actual work, so I dredged this up from twenty-three years ago to fill space.  (And sneak in an Illuminatus reference.)
Here were my additions to the science fantasy, comedy, chain letter, I have included the source lines with the list for those that have not lived with these films in their souls as I have.
Note, they are only from the Original Trilogy, because that's all that existed at the time the original gag went around.
This is because (yet again as Anabelle will always point out) I am a fossil:
1) I thought pants smelled bad on the outside!

THEY, Han, Empire, after he cuts open the Tauntaun.

2) But I was going into Toshe station to pick up some pants.

POWER CONVERTERS, Luke, Star Wars, whining to his Uncle as they buy the droids.

THE PLANET, Computer Voice, Star Wars, When the Death Star is closing on the rebel base.

6) Negative Negative, it didn't go in, it just impacted on my pants.

THE SURFACE, Red Leader, Star Wars, after the first failed attack run on the Death Star.

7) You are part of the rebel alliance and a traitor...take my pants away!

9) As a token of good faith I give you my pants...they are loyal and will serve you well.

THESE DRIODS, Luke (hologram), Jedi, Offering the droids to Jabba.

ON THE DETENTION LEVEL, Luke, Star Wars, yelling at 3PO through the commlink.

Maybe I should do sets for the other trilogies?

Or since they were almost all from the original movie, maybe I could do one for each film.

In related news, please help me.

Oh my gosh!!! I remember sending that email. I am honored you kept it this long.

Welcome to the internet, where every stupid idea gains immortality. Thanx for reading, and supplying material.