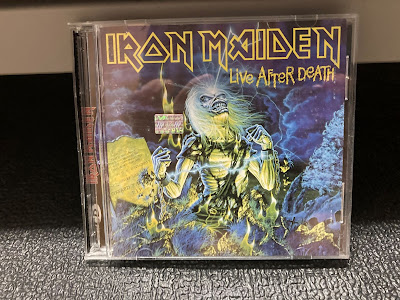 I have been a metal fan since transitioning from "comedy only" listening during high school in the Eighties.  KISS and AC/ DC hold places on both the "Mighty Stuff" and "Catchy Stuff" tapes.  Besides those two, I've driven and run to extensive Lita Ford, Aerosmith and Motley Crue collections. Plus several albums by Twisted Sister, Def Leppard, Jackyl, Quiet Riot and Ozzy.
However, going back to the TDK pouch cassette collection, Iron Maiden's live recording has lived in my car, and is one of the albums I needed to upgrade to a new medium due to wear and tear to maintain that position.
My first introduction to this concert came via Jesse's younger brother Ben.  I was visiting on a school break. Jesse was fueled on all-nighter's in college, while I needed normal sleep to function. Therefore on the break, that night he went to bed, and Ben and I stayed up watching stuff.
This was also the moment when I discovered, after years of disliking them, the appeal of Beavis and Butthead.  They're hilarious after three AM.  Ben also recorded MST3K for Jesse while he was away, adding yet another important media exposure to my college life.
Ben showed me the video of this concert, and I picked up the tape at Strawberries in the Price Chopper strip mall shortly after returning to school.
The reasons this metal selection stayed in the car all these years are multiple:
1)  It's wicked loud. Bruce Dickinson's amazingly powerful voice, coupled with the pounding instruments has kept me awake on many late night drives.
2) It's LONG!  Clocking in at over an hour and a half, it was the longest store bought tape I owned, and doesn't fit on a single CD. That translated to less dexterity gymnastics when driving.
3) It's intelligent.  Though hard to detect at first, due to the screaming vocals, and thrashing instruments, many of the songs have intellectual roots such as:
Britain during the WWII blitz,
Greek mythology,
biblical apocalypse,
Coleridge poems,
the plight of the Native Americans,
and many other deep and thoughtful themes.
Granted it took a couple of play throughs to figure out the words, but that's why it has resided in my car to this day long after the original tape wore out, I upgraded to CD and then digitized it.
It generates mental alertness through power, speed and content.
ROCK ON!!!!!!
Next up the greatest driving song in history
Mighty Catchy Index
Posted by Jeff McGinley at 2:00 PM