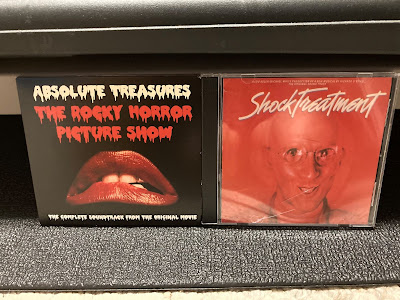 Back before the TDK pouch in the car days, this started as a ninety minute tape in high school with Rocky Horror on one side and Little Shop of Horrors on the other.
Little Shop  is fantastic, and has been technologically upgraded to join the huge playlist of Broadwayish songs that lives in the car fairly frequently thanx to my daughter and I .  Yes, Hamilton is in pretty heavy rotation now. That didn't make the list because
A) It's too new to know if it will have staying power,
and
B) it's more my daughter's choice that mine, making it the same reason the "always in the car" Mama Mia soundtracks didn't make the list, in spite of the occasional truck side interpretive dancing.
However, once Jesse introduced me to what he regularly called the "Secret Sequel" to Rocky Horror on Laughter Hours, it became side two of the frequently used driving, or other task background music, tape.
The music in these films is outstanding, surpassing the movies themselves in many ways.  Honestly, I think the individual songs, if not all of the execution, are better on Shock Treatment. It makes you wonder what would have happened if they were used for either of the first two more direct sequel ideas that were planned before bizarre studio changes and weird tricks of fate took hold.
Or how fantastic it could have been if Barry Bostwick and Tim Curry did come back, as they nearly did, to play Brad and Farley Flavors.
What we got is kind of a wandering mess, but with fantastic tunes. While Susan Sarandon is a better actor, Jessica Harper has a better Broadway belting voice. (And is no slouch at acting, turning in an memorable performance in My Favorite Year.)  Richard O'Brien, Patricia Quinn, Little Nell and Charles Grey shine in both films.
Th original Rocky Horror is, of course, the cult classic of all cult classics.  The cast  (with Bostwick, Curry and also Meatloaf plus the gang in both movies) means the performances of the songs reach outstanding levels.   Wouldn't it have been awesome if they let Meatloaf play Doctor Scott too like he did on stage?
Honestly, its far too easy to get music from either movie stuck in my (and presumably anyone else's)  head.  Singing along to "Little Black Dress" in traffic was somewhat embarrassing. Yet it didn't hold a candle to when I was running tests all day at work and subconsciously realized the beat of the pumping fixtures exactly matched "Sweet Transvestite."
I missed talking about this film for its forty-fifth anniversary back on August 15th, which was another reason to do this list.
Rocky Horror is a fantastic litmus test for tolerance of the weird, and off center.  My Mom tends to state she inhabits the conservative side of conservative on most issues. She's also intelligent, compassionate, a huge fan of classic horror and other weird films, and has been known to clean the kitchen at the start of the Up the Lake season while dancing around to this tape.
Dropping a subtle reference in a meeting at work and seeing who acknowledges it has been one of my ways of identifying who my fun and interesting co workers are for almost thirty years.
There are some folks who shuffle along in their shuttered, always trying to be normal lives....
and those of us who occasionally have a mental strut and internal kick line through the day  knowing, "Don't dream it...be it."
Next Week, Mood Stabilizing Oldies
Mighty Catchy Index
Posted by Jeff McGinley at 2:00 PM

Email ThisBlogThis!Share to TwitterShare to FacebookShare to Pinterest
Labels: music, The Stage

I've dropped the paraphrase "I shiver with anticia... ...pation"
To gauge reaction.

Just last week on a camping trip we visited some caves. There was a secondary entrance , someone said "There's a light" and I broke into song in the dark"...over at the Frankenstein place " and noted one person laughed

Nice! Mom pointed out if our clan was there we would have joined in singing with you.
Thanx for playing the home game.