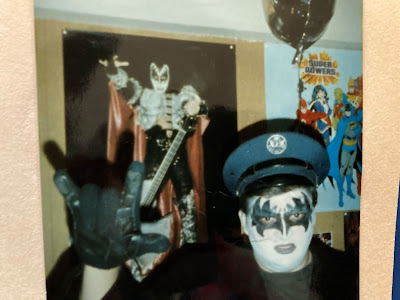 Lately, I've been reading your college series...and also some autobiographies and an autobiographical podcast episode. I'm so amazed (and maybe envious?) that you and these other writers have such strong memories about the distant past.

I have a few clear memories, many vague memories, and a lot of blank spots. Even with all my diaries....Sometimes they trigger memories but probably just as often, it's like a stranger wrote them.

Thank you. As will be evident in some of the later posts, (and Scott's comment on the first one) not all the memories are as strong as they appear.

Stuff sticks in my head, but I have no control of what. (So- good at trivial pursuit, bad at remembering why I'm in the supermarket.)

The fact that something was a funny story makes it stick more because of multiple tellings, but also adds the risk of it slightly morphing over time. The details of those offset that there are a lot of blank spaces around them.

That makes sense: funny story helping it stick. I think this is with my life and my family as well. We have a handful of often-told stories. It comes to the point where it's hard to tell if we're remembering the story or the actual happening.

That is the hard part. And as a lifelong Stand Up Comedy fan, I tend to word smith carefully as I work on the story. The scary part is there are a couple of "extended family stories" I've told over the years, and when I reached out to family to confirm a specific detail, I learn it never happened in our family.

Kinda makes me wonder where it came from.

OR it could be that it happened, and you're the only one that remembers.

If not that...it's likely a multiverse issue.

But some (where it's a family story that happened before my time that I thought a specific person told me, and that person and everyone from their generation has never heard of it) I think you're right about the multiverse angle.