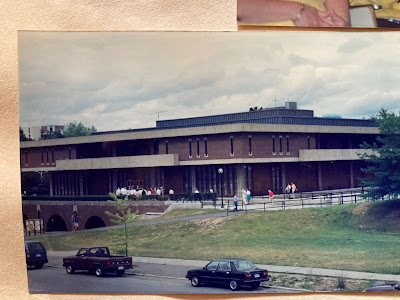 The main point of college is the classes, however, an equal if not greater amount of education comes from living on one’s own, and interacting with others from that standpoint for the first time.

While working on the E-Dorm adventures about most of my time at RPI, I found myself referring back to happenings in the freshman dorms many times. This was the first place I resided without my family, along with much of the rest of the building, leading to interesting times. I found that the longer I worked on the later stories, the more of these I remembered.
After a rare bit of self restraint, I figured I’d follow the George Lucas path and talk about freshman year following the completion of the other stories. Technically, it’s probably closer to the Peter Jackson path, since I’ll be throwing in random remembrances about later items, occurring during the times I’ve already written about, which I didn’t know existed my first year.
I have no idea what that means, if anyone figures it out, let me know.

Actually, my first RPI encounter happened well before I ever set foot on their campus. (He said, finally starting the post in earnest.)
Mom took me on a trip up to see colleges in Massachusetts during my search process. Upon pulling into a parking lot for an interview and tour at WPI, we asked a student where to park. He cheerfully told us we could have his space when he pulled out, and followed up cryptically with, “But you don’t want to go here.” This confused us more than trying to find any location in the Boston area before GPSs were invented.

Aside- The Boston City planners arranged it so that every one-way street in the metropolitan area pointed directly away from our hotel. We’d have to cross the river each time we returned to make visual contact, and then drive back towards it.

The student informed me that I really wanted to go to RPI, where he went. He was only at WPI to take summer classes from home. He told us his name was Luigi, and to look him up if I ever went to his college. Luigi was involved in just about every school spirit based student activity on campus, meaning I met him multiple times over the years. Due to missing time from an injury or illness, he was there the entire length of my time at the school. Luigi was as well known as he claimed to be. One night by the Union a low flying private jet covered with lights passed over making a huge amount of noise. Luigi looked up and asked, “Is that one of those new stealth planes?” Then the entire line of people waiting to buy hockey tickets -stretching all the way around the building- yelled out, in unison, “MAAAAAAAAATH MAJOR!!”

Bray Hall, like almost all of the freshman residences, was a three-floored construction with the layout of all floors the same. There were two long hallways at a right angle to each other filled with rooms on either side, and a large communal bathroom at the vertex. They were built to take the influx of returning soldiers after World War II, and hadn’t had much of a refurbishment or upgrade since then when we arrived in 1988. (Or when I visited with my daughter in 2020 for that matter.)

The first night I spent in one of them was a month or two before I started college. I don’t remember much of pre-freshman orientation. It was an overnight affair, giving us a taste of what sleeping in a dorm would be like.

Part of it was the usual “drink from the firehose” style information about living at RPI, which we’d all inevitably forget until each issue came up.

That’s also where we took the writing assessment to determine if we needed to be in the remedial composition class. I passed and was able to take whatever humanity or social science I chose. Foolishly, I picked one of the recommended freshman classes.

Jesse was wise enough to start with the non-recommended “Logic and Argument” from the Philosophy department. I ended up taking that later, greatly enjoying it, and following it up with an advanced Symbolic Logic class. The most fun part of the basic one was the professor constantly used “Frogs are green, Kermit is a frog” examples while sounding like Jim Henson’s most famous amphibian. In addition, he had a tendency to talk louder every time he faced the board to write, without reducing volume when he turned to face the class. The result was him eventually yelling by the end of class, still sounding like Kermit.

The recommended selection I picked was called “Progress and Its Problems.” It involved looking at Paradigms (renamed G.O.M.s – Grand Organizing Myths) to point out that an increase in technology was not always the best solution. While a simple concept to most rational humans, for many of those featuring a technical bent, with egos grown from having just finished at the tops of their classes in high school, it should have been a valuable lesson. The course was interesting when it could stay on point. The professors came from four different disciplines, and it included films like Modern Times and read books like Frankenstein. However, the large percentage of (primarily male) freshman students who assumed they already knew everything and therefore challenged most of the points of the professors made caused things to regularly drag off on tangents to beat the bleedin' obvious into their thick skulls.
One of the most egregious was when each professor claimed to be someone with a "controversial" viewpoint/ lifestyle and made speeches based on that. We had a "Terrorist," a "Homosexual," a "Marxist" and a "Feminist." When the one woman professor announced herself as the final speaker, a huge chorus of “BOO!”s rang out, mostly from the male ROTC members.

The “not actually a homosexual” professor that ran my break out section stopped the class cold and inquired as to why they booed only her out of all four choices. The genius answer, which sent the class down a route for a long and painful time for the benefit of those geniuses was as follows:
“We know the other three of you aren’t those things, but she really could be a feminist.”

Looking at the world today, it’s kind of obvious which niches they “grew up” to fill.

For the end of class, instead of a final exam, we were split into three person groups to talk about different G.O.M.s. We chose to do it as a “Christmas Carol” with G.O.M.s of past, present and future. I was still terrified of public speaking, but getting better thanks to juggling. (It was pre-radio time.) The presentation was due well before the final  (formal) paper. We had different schedules and styles, leading us to each chose one era's G.O.M. and work independently.

The girl in the group showed up in an old timey dress, and panicked the other two of us by saying she had no notes prepared to do her presentation. All of a sudden, she revealed her theatrical background by yelling at the class, “WAKE UP PEOPLE! WAKE UP!” and launching into an amazingly accurate and high-energy speech. I think the other guy and I high-fived at that point and rained praise on her when she finished.

The guy followed as a modern day white shirt and tie middle management type…which I’m sure is exactly where his career took him. As the Ghost of G.O.M.s yet to come, I naturally wore a command grade, Captain Kirk, Star Trek shirt my mom made using the insignia off my old pajamas, and built up enough self-confidence to “Shatner” a bit of it.

The guy worked his section into an acceptable paper, which I tweaked and combined with mine. The young woman handed me the script for her presentation she had typed up from memory after the fact. (Whoah!) It was in no way the proper format. Given how awesome she was elevating all of our grades, I happily used her information to write that section in the required style.

When I had my individual meeting with the professor, he described our presentation, as “Her energy level was UP HERE! *reaching toward ceiling* and he was down here *points toward floor* and then you were in the middle, but closer to her side. Given my massive stage fright at the time, it was a major accomplishment.

Pardon me for that sojourn into the actual academic year. Like I said, free form thought is the only way I can write these memories.
Besides course selection at orientation, there was also enforced social interactions to coerce all of us to get to know one another. (hooray.)

The only part of these "fun filled' activities I clearly remember was held in the Commons dining hall where we were introduced to “The Back to Back Boogie.” The idea (such as it was) worked like so:
Because no one knew each other, it would be better to link arms facing away from our partner, allowing us to “check out” other people when dancing.

The S.O.s (Student Orientation-ers? Wow, I just remembered the S.O. thing.) told us they would call out to switch partners periodically. The music started and I sort of hopped around facing away from the person who had been next to me. They called switch, and I found myself locked arms with a very attractive young lady and soon to be classmate. Being free of high school baggage is a beautiful thing. In spite of our ridiculous position, and over the loud music, we struck up a conversation.

Then an evil S.O. called “change” and an enormous monstrosity of a man linked into my arms and bodily dragged me around the cafeteria about a foot off the ground. On the next switch, I sought shelter on the side of the room and never saw the girl from the previous round again…

Thus setting the precedent for my romantic activities for the rest of my college career
Click to Continue to Final Orientation
Click for Bray Index
Posted by Jeff McGinley at 11:00 AM

I need a standing ovation!

1) Holy crap, I totally forgot about them telling us to build confidence by requesting standing ovations.

2) Holy crap, that was you interrupting the speaker!