In which there is happy nature and sad deserts. 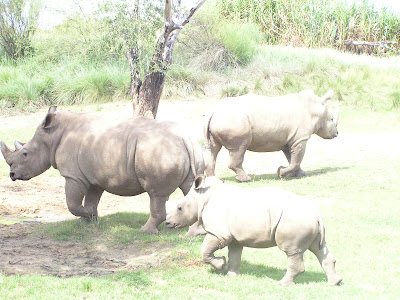 Anabelle took her nap as soon as we hit Animal Kingdom, allowing Rosa to video the Festival of the Lion King, hoping that her child might someday want to see it.  I walked the stroller around a secluded side nature trail with some birds, a nice waterfall on the Tree of Life, and two EXTREMELY HAPPY Galapagos Tortoises.  I really wish I had a camera, as the male was performing what has to be one of the greatest balancing acts in all of nature.

We all had a nice stroll through the African Pangani forest.  Anabelle ran happily from one place to see fishies and duckies to another.  One of the fish places even had a Hippotomomis in it, which was much better than the animatronic ones (but not quite as cool as the small world one).  The gorillas were a big hit too, probably because one looked like Daddy when he wakes up. She thought it was cool to stand in the gorilla footprints, but oddly didn’t want to touch the metal disembodied gorilla hand. (Go figure.)   She also had great fun standing on a step at the meerkat exhibit, even though she was still too short to reach the telescope, or even see over the edge.  But that’s fun for ya. Heck, there were even more flamingoes…yay!

As we left the trail, we learned that somewhere during this day, we blew a tire on the stroller.  The back wheel was riding only on the rim, which made the ride a little bumpier and helped make Anabelle nap faster. (Woo!)  It is an indication of the amount of ground we covered that the two sharp edges of the wheel (normally used to hold the tire in place) were worn flat enough by the time we left that they actually touched in the middle.

Proving again that the big problem is with the robotics, Anabelle had a fantastic time on the "bumpy bus" Kilamenjaro safari ride.  She pointed out all the animals, and said hi to several (especially more hippotomomises).  We all got a real close look at the rhinos when the mother of the baby decided to stand directly in front of the bus.  This led to a very entertaining radio exchange between the base and our guide.
Guide – " I'm stopped, there's a rhinoceros blocking the bus, and she's not moving."
Base – " Where are you."
Guide – "That would be…in the rhino exhibit."
Eventually she moved, we waved goodbye and continued our journey.

We brought our happy child for a Pizzafari lunch, and then hit some of the side nature trails around the tree.  The tortoises, alas, were done, but there were a couple of parrots screeching and screaming.  I told her they were making a "Hullabaloo".  Anabelle really liked this word and told everyone we passed that, "Parrot’s making hullabaloo!" then she'd laugh hysterically.  As long as she was happy, we let her confuse a large group.  We then found a little cave to view the underwater otter tank.  Since there were more fishies, we spent a large amount of time there both before and after the parade.  I taught her to identify the pacu, the catfish, and the grumpy fish.  I even showed her how to make the grumpy fish face, which she became quite proficient at. (See, very educational to have around.)

We got seats right at the edge of the road for the parade for a change, and Anabelle and I sat on the floor together excitedly awaiting the start.  It was led by none other than Baloo and King Louis, who came over to shake Anabelle's hand, at which point she screamed and leapt into my arms.  Later she told me it was because his "banana hat is scary".  Obviously, why didn't I know?  I spent the parade standing and holding Anabelle as she laughed and excitedly waved to everybody.  She even shook Pluto's hand, which was a major breakthrough.

Animal Kingdom closed, ending what was finally a successful park day for us, now that we stopped traumatizing our child. We headed over to EPCOT (stopping briefly to photograph the now perfected grumpy fish face) for nap two and dinner in China.  While the baby slept, we strollered over to Canada to get the last …umm…mask thingy for her mask.  I told the girls giving them out that she usually picks a color herself, but was out cold.  At this point she sat bolt upright and said "yellow", then plopped back down.  The kid knows what she wants.

Rosa unfortunately realized that there must have been the same ingredients in the cake at lunch that was in the Hoop-de-doossert.  So it became my turn to have dinner in EPCOT while she had water. (See, we share everything.)  Anabelle was thrilled to finally get some rice for the first time since our arrival day.  At this point we realized a lot of our stomach issues were likely compounded by dehydration.  Therefore, Rosa took to drinking a lot of water with ice in it (which she never does), and I started each day with a big bottle of Powerade (which I don't like).  After dinner we ran back to the bus to avoid the inevitable EPCOT thunderstorm (cursed I tell you…cursed!), followed, of course, by fountain running at the hotel.