In which our child turns two in the Magic Kingdom. 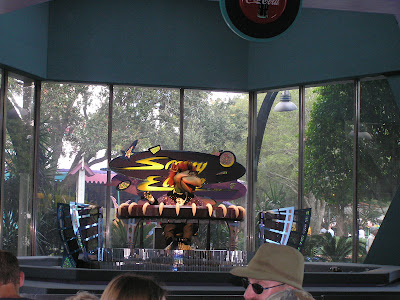 For her big day, we dressed Anabelle in her Minnie Mouse dress and took her to Chef Mickey's in the Contemporary.  Yet again, there were a lot of happy moments, with hugs and kisses for Mickey, Minnie, Chip, Dale, and even Pluto.  She still wanted nothing to do with Goofy and gave him a wide berth.  She joined in the napkin spinning celebration, and was excited to get her own birthday cupcake, with candle.  We got pretty excited too when, instead of blowing it out, she reached out to grab the flame.  There was a lot of yelling, jumping and blowing on our parts that she found very amusing.  Minnie even came back for a second pass to compare dresses and give her a birthday hug.  Auntie Kim also called during breakfast to wish her a happy birthday, and then Uncle Dave got on to sing to her.  Anabelle looked at me, said "no" and closed the phone.  She knows what she likes, I guess.  Our breakfast ended with a transcontinental laugh at Uncle Dave.

We took the walkway back to the Magic Kingdom, and she was nicely unconscious as we headed up Main Street.  Rosa was going to stay with her and film Cinderellabration while I rode something else, but she woke up just as it started. (See, even our timing got better.)  I put her on my shoulders so she could watch the pretty, if uneventful show.  My favorite part was the introduction of the couples.  They already had Cinderella and Prince Charming there, and introducing Aladdin and Jasmine, and Aurora and Prince Phillip was no problem.  However, Belle and Snow White were both introduced with, "Her Prince".  I can understand that the Beast never got another name, as he’s more marketable in his furry form, but really.  I mean, Snow White came out, what, over six decades previously?  Couldn't someone at Disney take five minutes to name the corpse kissing clown?  Anyway, it was a very girly show, and made my very girly wife and daughter very happy, and that’s what is important.

After the show, we realized that in the amount of heat there, the Minnie dress had to go.  Following a great deal of obligatory pictures we took her to the baby changing room, and put her in something much more comfortable.  This is where she really got the hang of telling everyone she saw, "I'm dos!"

Because it was her birthday, there was A LOT of small worlding going on.  Rosa and I took turns taking her while the other went back to the Haunted Mansion.  Rosa proved that the spirits really do not like flash photography, as all the mystical elements vanished in the pictures she took…spooky spooky.  When that was all done, we took her to the carousel again.  Instead of riding on the little horse on the inside track, as she did the other times, we let her ride on Cinderella's own horse, one of the big ones.  Anabelle had a great time hanging on for dear life (while I tried to hang onto her in a similar manner).  We also caught the Sword in the Stone show with Merlin while we rode.  More great gags:  He called a kid with a Nike hat "The lad who puts check marks on his clothing so he knows what he has put on, very wise."  And of course the famous Marxian exit line.  "The secret to magic is believing, and I have to be leaving right now."  Oh blessed, sweet, corny stupidity.

Speaking of which (lovely segue, Jeff) we had lunch in Cosmic Rays café, where we could watch Sonny Eclipse, the singing, animatronic alien who tells bad jokes (I love that guy).  Anabelle's fear of animatronics was overwhelmed by her love of eating (that's my girl), and she started to enjoy the show.  I even taught her to make the "happy Muppet face" to Mami when he would tell a bad joke. (Again, very educational to have around.)

She was in a good mood, making us decide to try to take her on the Buzz Lightyear ride, as it’s full of well lit multicolored pretty things.  Rosa tried to keep her calm as we entered, but the sight of the Giant animatronic Buzz in the entry room put her into "Wanna Go Back" land, and we took turns. Whoever didn’t ride let Anabelle call other relatives for birthday greetings.  I got over eight hundred thousand points (no joke here, I was just psyched).  We had gotten used to leaving the stroller behind when we did things and picking it up later, trusting to the magic of Disney to protect it.  Therefore, we were quite surprised when we both finished riding and couldn't find it.  This would be one of the truly bad moments…Rosa was trying to find the stroller, but since she had just been on the ride, and then ran off right after returning, Anabelle went into Super Mami Mode, and began to bludgeon me.  This greatly impeded my ability to search.  Fortunately, once Rosa took her back, my vision cleared quickly enough to locate the designated "stroller parking" area that a cast member had moved ours to.

After this fiasco, we came out to Main Street to the parade and better times.  It wasn't raining (because we weren’t in EPCOT), allowing even more floats than the first time we saw the parade.  Also, the pre parade entertainment gang did the Hokey Pokey.  Thanks to all this, I had a thirty-pound sack of dancing happiness on my shoulders for a while.  She amazed some other spectators by naming (and saying hi to) every single character that passed.   She's very thorough.

The parade ended well past naptime, so Rosa put her to sleep while I checked out the new Stitch ride.  Surprisingly I found it to be an improvement to an attraction I liked, and I don't even like Stitch.  My only complaint is the loss of the Tim Curry robot, which was too cool for words.  In yet another happy surprise in Tomorrowland, the Carousel of Progress was open, for the first time in about the last four that I've gone.  I really wanted to share this with my family, but realized that since Anabelle was already waking up with nightmares, bringing her into a sealed, moving, dark theater, filled with singing animatronics would probably be a bad idea. I decided to go alone while she continued napping.  We even got to see the talking garbage can, as it brutally (verbally) tore into the little girl kicking it, and her parents, what a fun job.

Anabelle woke up in time to be taken to dinner with Cinderella at the Grand Floridian (after a final small world).  The trip there also marked her first monorail ride.  This was by far the best meal we had, and I was still a little full upon landing back in New Jersey from my multiple buffet trips.  When we arrived, Anabelle ran right up to the Fairy Godmother, just like in the castle…then changed her mind and ran back to Mami.   Apparently, she's very picky about her Fairy Godmothers too.  Anabelle enjoyed yet another fun birthday meal, even allowing Prince Charming to talk to her a little, and come in close enough for a picture.  There were many hugs, kisses, and nose beeping for Pearla (purple dress) and Suzy (green dress) Mouse.  Don't be too impressed, I had to ask the hostess the names of the mice, all I knew is that Anabelle was probably wrong calling one of them "Gus".  Cinderella was greeted with the amount of enthusiasm she deserved.  To our daughter’s delight, another birthday cupcake came; this one came with a crown, and a singing waiter.  To our even greater delight, she blew this one out instead of grabbing it.  After dinner, Anabelle spent some time dancing around the hotel while the house orchestra played some of her favorite Disney songs (Ok, so maybe there's more benefits to the deluxe resorts than "less buses", but do they have a giant Big Wheel? I think not.)

We decided to take another birthday monorail ride before returning home.  Rosa got us into the pilot's car for the trip to the transportation and ticket center. (She's quite a smoothie when she needs to be.)  Then we changed over and took the monorail to EPCOT, which always looks pretty at night. It rained on us (cursed!) as we waited for a much shorter bus ride than the one from the Magic Kingdom.

The pool was closed and we worried that Anabelle wouldn't be able to run through the fountains on what was both her birthday and last night in the hotel.  I went out to check and they were still open.  Thinking they could close at any minute, I left both our shoes and my shirt and glasses with Rosa, and ran my child over to her favorite place.  Then I stood there in the pouring rain and watched her spend most of the time ignoring the fountain to jump in the rain formed puddles.   Rosa picked up our packages from the day before and brought them back to the room, we followed soon afterward.  Apparently, running through fountains isn't nearly as much fun as when there aren’t hundreds of other children also running, causing near collisions (and sometimes actual collisions) at a rate of thirty-seven a second.  Anabelle and I took one last hotel walk to get milk and ice, and we returned for our last night of Disney sleep.