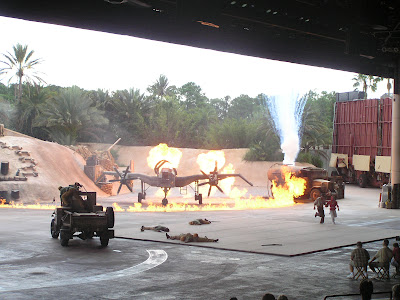 The last day's morning was, of course, filled with packing, checking out of the room, and into the airline.  We took one last walk around the hotel to take pictures of the giant props, including one of me being crushed by a huge “little foosball man” that can only be titled "Bray's Revenge".  Anabelle whiled away the time we had to wait to check into the airline by playing with hula-hoops and chalk drawing on the ground, as well as all over herself.

With bags secured, we headed for MGM for some last minute fun.  Having enjoyed Beauty and the Beast, we thought Anabelle could deal with Indiana Jones. (That’s based on theater type, not content, pay attention people.)  The show was already started as we came in and that grabbed her attention, until she saw the seats.  Then she went into "Wanna Go Back", for reasons only she knows.  We tried sitting way in the rear, and even telling her that Miriam was "Jasmine".  She told us, "Don't wanna peek at Jasmine!" killing that evil plan.  Based on my previous failed photographic attempts, I took the baby out while Rosa stayed to take pictures.  As we were leaving, there was some gunfire and explosions, which caught her attention again, and she seemed to enjoy. (That's my girl!) Sadly, when the carnage ended she got scared again. We left to start her nap while waiting for Mami.  After getting some great close up shots, Rosa took over nap detail and I caught the Movie Ride.

It was time for our lunch reservation, but since we hadn't actually made it on time to any other one the whole vacation, it was silly to start now.  We passed down Mickey Avenue, and waved to Mike and Sully from VERY VERY far away, because Sully, "Is big and scary…and Mike too."  We found sorcerer Mickey, who was unfortunately in a dark room.  Anabelle was also hungry, but we really wanted her to say goodbye.  The setting scared her, and she wanted to go eat, but she was waving at Mickey so we figured it was OK.  When it was our turn, we put her down, expecting her to run up and hug Mickey, like she did every other time.  She just stood there and said "No".  So we held her hands and tried to walk over to him, at which point she threw herself on the floor screaming "Wanna Go Back!"  With us holding her hands we looked like award winning parents, dragging our child to a horrid fate.  We picked her up and all stood by Mickey for the picture. As he put out his hand to touch hers, it was like she finally saw who he was.  She stopped crying, and as I walked away, I put her down. She ran back and gave Mickey a giant hug and kiss, then held his hand, smiled and said, "Good Bye, Mickey." (Did I tell you?  Moments.)

We had lunch at the Sci-Fi Dine In Theater, which scared her at first, especially when we went in and she didn't see fishies. (Poor kid got her restaurants confused.)  Luckily, there was a Tom and Jerry cartoon on, which she liked, and she thought the car was cool.  Round that off with chips and spinach dip on the menu, and we had a happy baby.  We made quick stops for a Belle doll for Rosa (to match Anabelle's Ariel), and to hit the Star Wars store.  Anabelle was calm enough to let them take the picture and make her into Princess Leia through computer magic. (Yes, that was for Daddy.)

We returned to the hotel a little early for the Magic Express bus, allowing Anabelle and I to spend some more quality duckie punching time, gaining enough tickets to get her a little bitty camera.  Cheese!  She napped on the bus while the driver played a Three Stooges DVD, insuring him a good tip.

The plane ride back went much smoother than the ride down, likely due to:

(A) Her being too tired to move much,
(B) Us telling her we're going to see Grandma and Grandpa and
(C) The little girl in the seat in front of her that talked to her and played with her most of the flight.

There was one incident on the plane.  It was the most difficult physical task I had to perform in my entire life, easily eclipsing any juggling stunt.  I had to change Anabelle's dirty diaper in the airplane bathroom.  It's hard enough just to USE one of them, never mind enter one with two people.  Plus, as soon as we got in there, the plane started its descent…through turbulence.  Frankly we're both lucky to be alive.  If you asked Anabelle where daddy changed her on the plane, she'd tell you, "The teeny teeny tiny tiny room."

Anabelle was very happy to see Grandma and Grandpa; by some miracle we fit everything in their car, and had a restful ride home.  For a prolonged time, Anabelle frequently, out of nowhere, hit us with one memory or another.  She also sang the whole small world song in both English and Spanish.

My Dad always told me that kids needed to be at least four before going to Disney World.  Perhaps he’s right. We all have a lot of great memories, but I can honestly say I have NEVER, in my life, been as tired as I was that week.  Also, after completing my first Disney trip as a parent, I’d like to publicly apologize to my folks for any time I mouthed off, acted up, or was even mildly unpleasant on any vacation we ever took.  I need a nap.

There's so many details I'd want to comment on...but don't want to be annoying. BUT I will say I think it's sweet that Rosa and Annabelle both got princess dolls.

Our child was scared of quite a bit, so I can relate to a lot of that. At one point (age 3-5?) he was scared of ALL rides, all characters, and also the monorail. Was often a struggle to get him to even go into some buildings. BUT he still loved the parks...mostly the playgrounds and the water thingies. It was a huge struggle and accomplishment to get him to finally try It's a Small World.

Many thanx for reading an commenting. Seriously it means a great deal. That's the two greatest compliments I can get, on being a good husband/ father and a good writer.

Criticize my engineering skills all you want, but it hurts to hear I'm not funny.

Yes, she does handle the adorable well, thank you, she gets that from her mother. Her rising smart aleck side, that's all me.

I'm glad you're enjoying them, and giving me another chance to go back and relive them.

Sounds like you went through the same stuff we did. Having a great time once you figured out how to not terrify you child, and then convincing them of stuff you like. There's a reason the next trip is subtitled "No no no... again again again."