Since the first season is now available on Blu-Ray instead of airing on a network I wasn’t prepared to subscribe to for only a ten episode half hour series, I can acknowledge the existence of something I was looking forward to for quite a while. 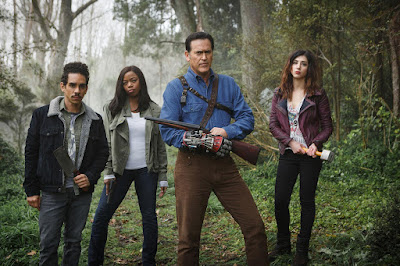 It’s an interesting mix of the Evil Dead mythology, borrowing the most in terms of both content and tone from Evil Dead II. Considering that is the “Greatest Film in the History of Cinema” that was a wise choice.  While the slapstick elements and goofiness still reign, it is still a horror story at its heart, and the terror ratchets up a few times an episode.

The flashbacks hit the relevant points interchangeably between the first two films.  Since the opening portion of the second served as a pared down recap of the first, no issues arise.

They don’t have the rights to Army of Darkness footage, so there’s no direct reference to time travel.  With the exception of the Director’s Cut “end of time” ending, there’s no reason it couldn’t have happened, though.  Ash’s personality is closer to the over the top blowhard whose only saving grace is the skill of slaying deadites from what was Evil Dead 3 in all but name.  In fact, his attitudes and persona run closer to his self-parody role in My Name is Bruce.  He even lives in a similar looking trailer.

Perhaps My Name is Bruce is in the continuity of the films?

Ash could have sold his story, changed his name and taken up acting for a while, then returned to Michigan to resume his old life when the acting jobs dried up leading to the new series.

In contrast to the levels of silliness associated with those films that this show reaches at times, sometimes the horror elements ramp up to rival and surpass the original Evil Dead.

Ash is supposed to be mentally and emotionally stuck in the era before he went to the cabin. This is highlighted by featuring classic rock from the seventies and eighties.  Since the tunes are chosen to be the ones Ash enjoys (which I’m guessing means Bruce Campbell and Sam Raimi like them) they are all awesome.  Any TV series that works in three Alice Cooper songs in the opening season is doing something right.

While Sam Raimi only co-wrote (along with brother Ivan -who co-penned episode 7 as well- and co-show developer Tom Spezialy) and directed the first episode, the whole gang is back to help out with this show: Friends since high school and the masterminds behind the original- Bruce Campbell (as well as bringing all that is himself to the lead, of course), Sam Raimi,  and Rob Tapert are  producing, with Ivan Raimi as an Executive Producer. 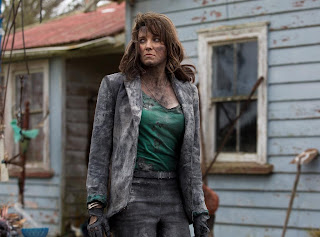 Rob’s wife, Lucy Lawless, has a starring role and Joe LoDuca is back doing the music.  Their hands guiding the gore covered brand of comedy (or comedy covered brand of gore) is evident throughout.

1987’s Evil Dead II  Rated R: Most of the profanity is muttered or off hand, Two almost unintelligible F-words. Blood and gore is voluminous but almost never colored red when spurting.

1992’s Army of Darkness  Rated PG-13:  The profanity used tends to be center stage, for comedic effect.  One faint F-word. Blood comes in only non-red geyser like moments.

2015’s Ash vs. Evil Dead Cable Channel- Profanity is unrestrained in all situations. The F-word flows as freely as the bright red blood: gushing spurting and spraying everywhere.

Remember whose blog you are reading here folks.  This is me saying this show has A LOT of profanity and entertainingly splattering gore.  When I say that, it has extra meaning.. 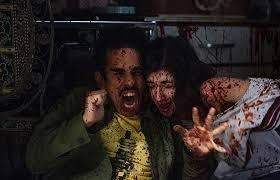 These people are clearly having fun while producing a horror series with all the greatness infused from their films.

It’s not all goofiness and gore however. Between those are emotional connection scenes needed to connect with characters in an ongoing series.  (Although, since this is the true Evil Dead universe, getting overly attached to just about anyone may not be wise.)

In episode eight “Ashes to Ashes” is a tragic death scene that is played with equal parts horror and sadness, because Bruce can be a phenomenal actor when he wants to be…
However, unlike other horror series, it then leads into a hysterical “Ash fighting himself” scene. 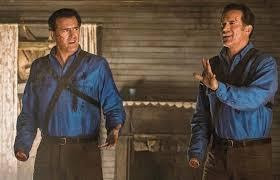 Another difference that separates a deadite invasion from the typical zombie apocalypse fare, is the deadites aren’t simply mindless undead.  They’re controlled by Kandarian Demons, with power, speed, trickery and the need to "swallow your soul" at levels far above those of the more popular zombie variety.

Yes, they actually do reference Kandarian demons.  We also get to see an unleashed Kandarian demon, which is as far above a deadite when it comes to power and scariness than a deadite is above a bed sheet ghost. 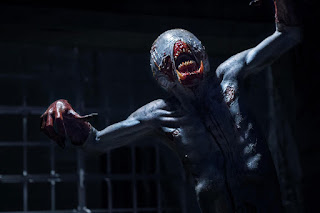 With the whole gang back together, there’s no skimping on the mythology of the films.

The Necronomicon Ex Mortis is still the source of troubles, still inked in blood and bound in human flesh, and still metaphysically connected to a bone handled Kandarian dagger.

There are still scary dark places at the bottom of steps and chilling lullabies and nursery rhymes.

Bad/Deadite Ash is still as dangerous and cruel as in Evil Dead II, and just as funny as in Army of Darkness

There are still tiny antagonists that are more fearsome than they appear, generating humorous reactions from our hero.

Everything is still not what it seems with the Knowby family.

The cabin with the impossibly spacious interior still looks the same, with details down to the shotgun holes and damaged kitchen shelves.

The work shed does too…along with “things” left behind there. 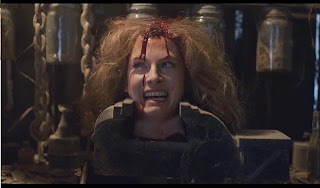 And no matter how much of a buffoon he is most of the time, there’s no one on earth better to be on your side when the Deadites attack than Ashley J. “shoot first, think never”  Williams, with his chainsaw and boomstick. 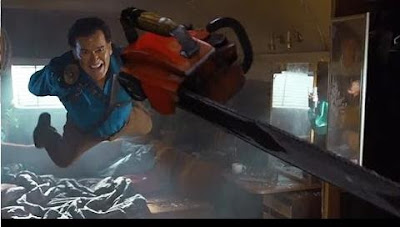 If there’s any doubt that the Three Stooges are still an influence, the weapons are nicknamed “Moe and Larry.”

Sure he’s a little older and slower now, but the Kandarians are too.  I think that’s why they can be stopped by decapitation instead of total dismemberment.  That tends to come later anyway, it’s that kind of story.

The show works spectacularly well for what it is, a series of vignettes placing Ash and his cronies against the elements of evil in a different setting each week, with the final three episodes focusing on a return to the cabin. The half hour format means the focus is on scares, gags and action.  With less to think about between, I viewed this series without the anti-binge sentiments I hold toward Marvel’s Netflix outings and watched the first eight in one day.  If I started earlier, or my body didn’t demand occasional sleep, I probably would have finished the last two as well.

There was one scene I found, if not problematic, confusing.   Strangely, it was in the first episode, where Sam’s direction and writing provided some of the best true horror moments in the series. 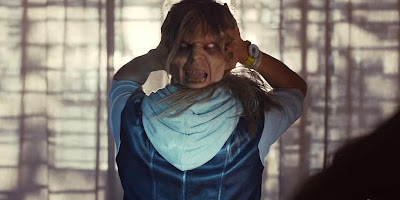 Pretty much the opening moments of the whole shebang are Ash heading to a dive bar at closing time, resulting in an oddly shot and acted, standing up, fully clothed, last call bathroom sex escapade.

There’s a jump scare with an indication of what’s coming in the narrative, but the tone and content of the scene do not match anything that occurs in the rest of that episode, or the nine that follow it.

All I can figure is Sam, Bruce and the gang put that in to insure anyone with a remote chance of being offended would switch off immediately, before the regular decapitations of deadites that soak the entire cast in blood could get rolling.

Season Two starts broadcasting in October…with Ted Raimi getting an on screen role, and Lee Majors showing up as Ash’s dad. 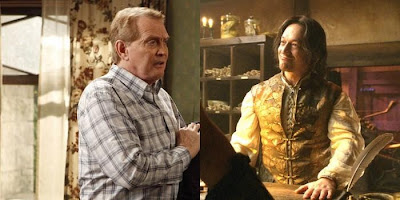 It’s going to be rough waiting until next August.