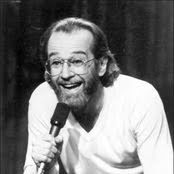 As we continue with the boob joke list portion of the Sixth Annual George Awards, I realize the list probably didn't need to be split up, but there was something satisfying having these posts be "a pair."

Amidst the embarrassment of picking this topic in the first place, I realized that far too many days have gone by in my life without a written reference to multigenerational family favorite Transylvania 6-5000 (1985).  Gena Davis is close to a walking visual boob joke in this one, but the verbal moment that deserves recognition comes near the very end, when the “Mummy” is revealed to be “Ugly Hattie” after reconstructive surgery.  The discovery of the effects of the body lift has Ksenia Prohaska deliver this vocabulary expanding winner: 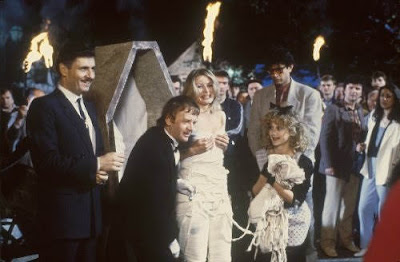 “Bazonkers!!!
I never counted on Bazonkers!
Oooh, I'm so content."

Mel Brooks could easily get another full top ten list in this area, but I think giving the man two lifetime achievement George Awards is enough for now. Instead we’ll allow two of his films to tie for Third Place.

The first may be the most famous double meaning boob joke in history, within the greatest constructed comedy of all time. The other is a little less organized, but could be his film with the funniest individual moments.

On the twenty-fifth anniversary of 1974’s Young Frankenstein, Terri Garr who played Inga stated that not a day goes by without someone coming up to her and saying, “Would you like a roll in the hay?” or the line Gene Wilder’s Doctor "Fronkensteen" says when seeing a massive door array: 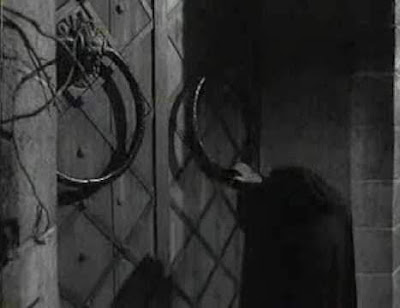 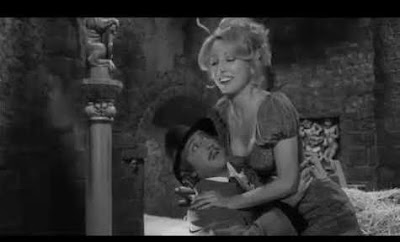 A lesser known, but at least as well executed Brooksian moment allows me to pay tribute to the wonderful Madeline Kahn again. Her complaint to the litter bearers as Empress Nympho in 1981’s History of the World Part I established her brash, brazen and oddly New York accented Roman royal character as soon as she appears on screen:

"HALT!"
“Could you PLEASE step on the same foot at the same time!?
My tits are falling off!”

The reasons anyone could top Mel Brooks comes down to both specific personal experiences, and surprises.

The Number Two George Award goes to the long overdue for a spot on these lists Amazon Women on the Moon,(1987) with portions directed by George Award alumnus John Landis.  “There’s no fucking Thelma here!” and “Bullshit or not?” clearly should have gotten noticed earlier.

For this year's category, it's the section focusing on Pethouse Plaything Taryn Steele. In a parody of “Adult Channel” profiles, Monique Gabrielle walks around her home town in the nude going through normal activities.  It’s the narration while leaning forward into shot during the museum scene that gets it:

“Art is my life.
I love to browse Laguna's art galleries
and my dream is to one day
have some of my things hanging here.” 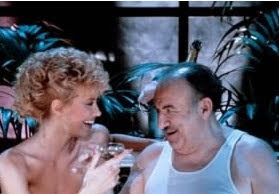 Yes, I used a different picture. Don’t be gross; it’s not that kind of celebration. And while good, the award winning funny moment was actually not on screen, but in my home when Lee heard that line and blew an entire pretzel out his nose, across the living room and into the baseboards.

For the First Place Spot in this George Awards list, the incongruity of this moment showing up in what was basically a Disney movie, years before Elsa's bazoomcicles.   The impeccable timing and delivery by Bob Hoskins are what catapulted it unquestionably to the highest point. The toon Jessica Rabbit (voiced by the uncredited Kathleen Turner-speaking, and Amy Irving- Singing) had a fair amount of her “not bad just drawn that way” physique used for physical jokes of this nature, which was surprising enough.

The moment in question, however, wins by being verbal.  After Greasy (one of the weasels played by Charles Fleischer, although the David L. Lander one should get bonus points for being named Smartass) tries frisking Jessica by shoving his hand down her cleavage and gets a bear trap for his trouble, 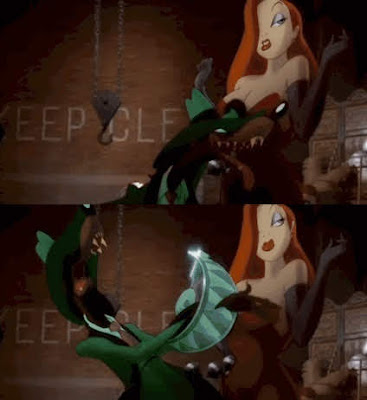 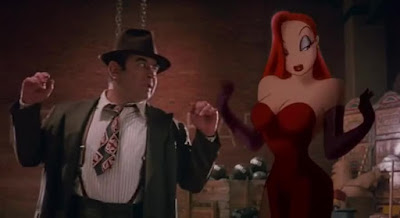 APRIL FOOLS!
Once more things get weird in a countdown, and the actual highest award is both above First Place, but didn't happen on the big screen itself.

The greatest laugh I ever had at a movie boob joke was during 1995’s Species. It occurred in a movie theater, but it had no prerecorded verbal component.  Instead, shortly after Sil (played by Natasha Henstridge) used her horrific Geiger designed monstrous form to shoot a tentacle out of her breast and choke a man to death with it; my friend Kathy immediately spoke up, stating:

“Oh…that’s what the wonder bra does.”

And I fell out of my chair.

More evidence that this ability is genetic, beyond my family, her brother had a thing against Egg Creams.

It is always fun to have a musical send off.  Since this Rusty Warren classic has been stuck in my head since I started working on this list, click here to get it stuck in yours too.

Thank Doctor Demento for helping to make my childhood much stranger than most people, (then again, my folks already knew this one.  Abby Normal is a great way to grow up.)

Then raise a glass to the guy who called into our college comedy radio show every week to request it.

Click here next week for a movie getting this year's special recognition George Award, which means I feel like talking about one of my favorites yet again.

Hahahaaaaa! Awesome! The greatest jug chuckle I've ever had wasn't movie related but definitely worth mentioning. It was completely random. Nothing mammary in the air, no lingering tit residual of any kind. Jessica and I were sitting on our bed cutting pictures out of magazines. I sneezed and just as the second o in "choo" fell silent she said "Gesundtits". The "tits" was quick and sharp. The "i" was almost completely abandoned and she really laid some stank on that s. After tucking my throat back in I sat there with a closed lip smile collating, realizing what she said and steadily laughed my way into a Dom DeLuise Hot Stuff pot smoking/Muttley combo cackle. Also, "Deranged" with Roberts Blossom contains what I consider to be one of the greatest examples of tit-speak in movie history. I'll post the scene.

The throat tucking was due to the sneeze, not laughter. My sneeze is essentially a declaration of war. I wont lie though. It's not completely involuntary.

Thanx for reading and sharing. Real world George Award moments are the best ones.

A funny moment from an Ed Gein inspired film...Why not?

It wouldn't be the weirdest thing in these lists.