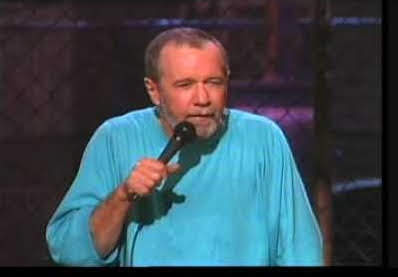 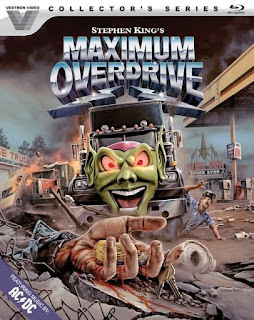 With the one and only list of this year’s Sixth Annual George Awards complete, it’s time to give some special recognition to a film from 1986, for no reason other than I’m a big fan and Vestron is just about as good as Shout Factory when it comes to insane overkill on extras for cult film releases.

And, yes, that was Marla Maples in one of the cars pelted with watermelons on the drawbridge. 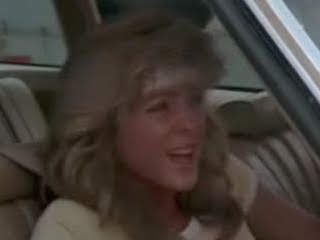 Maximum Overdrive is a love it or hate it experience.  Stephen King himself said, “Everyone makes mistakes now and then. I directed Maximum Overdrive, I know what I'm talking about."

Oddly one of the commentators Vestron hired is among the haters.  What most people, including “pretentious film school comments” guy dislikes about the film is – it’s stupid.

More oddly, those like myself, and MST3K’s Jonah Ray (on another commentary) like it for almost the same reason.

This film celebrates its ridiculousness, and that kind of dedication needs to be rewarded.

The making-of bits show that the cast all had a great time together, which is obvious on screen as well and adds to the enjoyment factor.

Combining several theories on the film’s inconsistencies, I have to agree with the proposition that the reason some machines aren’t affected is that they’re domesticated.

The cars belonging to Curtis (John Short) and Connie, Bubba Hendershot, and Bible Salesman Camp Loman not only never attack anyone, but also are pulverized and dumped on by the trucks.

The vehicles we see attacking people are company owned:  the trucks, an ice cream van, a pizza delivery car, a passenger plane and a military vehicle.

I think they punished those cars for siding with their owners. 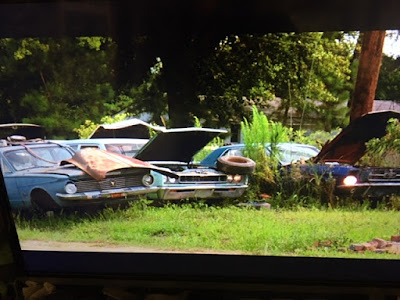 The only other cars we see helping the machines are the abandoned ones that flash their headlights at the passing humans.  Again- abandoned- they have been left by who they might have protected.  It doesn't explain the lawn mower, but I’ve long suspected they, and snow blowers, hate all people.

Before I go too far down a hole trying to add logic to a film with killer machines, a rockin AC / DC soundtrack, and things exploding into flames with minimal provocation, (including toilet paper) 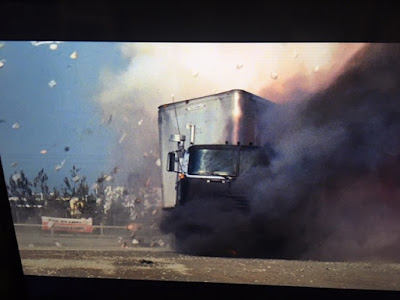 let’s get back to the topic at hand for some George Award level profanity.  Stephen King should have earned one for his cameo during the first edition of these exercises in foulness.

"C'mon over here, Sugar-buns.
This machine just called me an asshole!"

Emilio Estevez gets many of them as the main character, Bill Robinson, but there’s still plenty to go around.

Like all great bad movies, there are many differences in tone using the same words.

From the most heart wrenchingly subdued-
Holter Graham as young Deke Keller as he prepares to submachine gun a fast food order speaker that’s ratting them out: 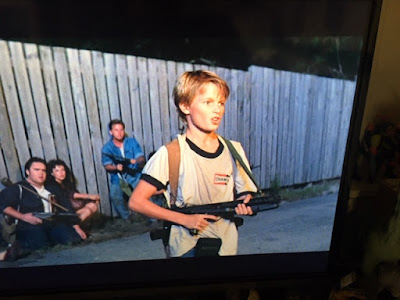 “This is for my Dad, you loudmouth son of a bitch.”

To the most hysterical over the top babbling-
Ellen McElduff as Wanda June when she finally snaps and goes to her famous, full on crazy mode rant:

“You sons-of-bitches!
We made you!”

Back on the subtle side, we have hitchhiking Brett Graham, played by Laura Harrington giving a stern but direct warning to Chick Tract reading bible salesman Camp Loman (Christopher Murney) as he tries to paw her:

“If you don't get your hand off my leg,
you're going to be wiping your ass with a hook next time you take a dump!”

It's the total outrage of Loman at her “ingratitude” and filthy mouth that ends up being the lead in for one of my favorite on screen rants of all time. While he’s already been established to be a sleaze to the audience at this point, his false front shown by his offense at language is maintained for his trade.  This gets smashed when one of the sentient trucks runs into and dumps a load of trash on his car, yielding a magnificent switch: 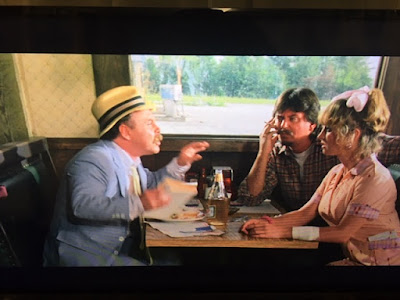 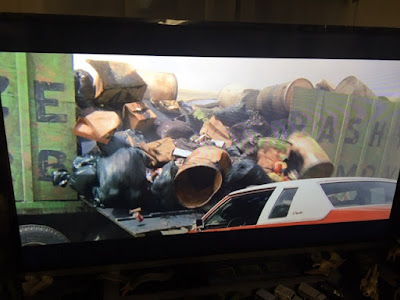 Oh, cocksucker!
Son-of-a-bitch! Out my way, bitch!
Fucker!
I'm gonna tear 'em up, boy!
Where the hell are you goin',
drunk son-of-a-bitch?
God dammit, you snot bag! Come on out!
Let me go!
You wanna rock and roll with me?
Bastard!
Right here, you, prick!
You overgrown! Scum ball! By God!”

Brett has another quiet quality moment when Bill and friend come running back after setting off one of the films many excellently filmed explosions: 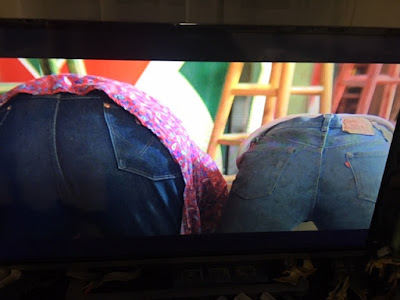 “I ain’t never seen a hero with his ass in the air like that.”

Her most emotional profanity keeps that same controlled delivery.  When the fantastic Pat Hingle as complete jerkwad Bubba Hendershot lets poor Deke know his father died in the least empathetic way possible, her initial response has more power than the follow up slap: 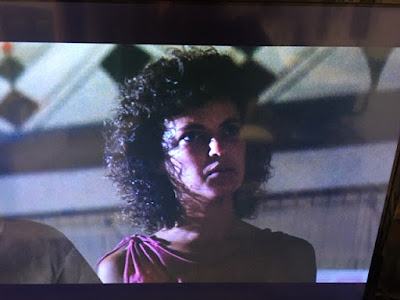 But it is Emilio Estevez who often shows what an effective leading man can do with the right dirty word.

His reply to another of Mr. Hendershot’s equally reprehensible moments, as he advises them against any altruism,  is a tad more all-inclusive:

Bubba- "You boys are crazier than two rats in a plugged up shithouse." 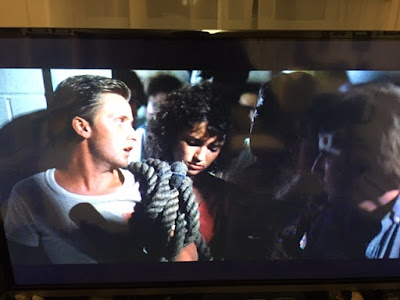 Bill- “And you are, without a doubt,
one of the biggest fuckheads I ever met.”

Bill has some quiet rebellious moments against the trucks as well. Such as when he suddenly channels a “dealer” to gas up the Green Goblin Happy Toys rig: 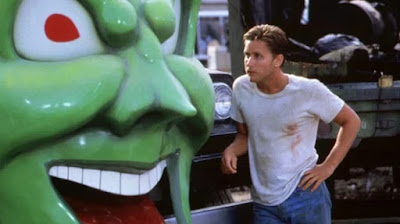 “Tell all your friends the main line's open.
Got the best shit on the east coast, practically uncut.
You got that, fuck face?”

He also gets the capstone when as he launches a rocket at that “fuck face” with a delivery that always made me believe he borrowed it from the namesake of these George Awards, specifically Carlin’s “Hello and Goodbye” bit from Playin’ with Your Head.

While in the film, her yells of “CURTIS!!!” overwhelmed just about everything else she said, and most viewers found her annoying, she had a fantastic moment of real emotion. These were sprinkled through this ridiculous thing, giving it the greatness it has earned in some of our eyes. (Plus the toilet paper filled explosion thing, of course)  She is vehemently dead set against Curtis helping Bill in the "biggest fuckhead" rescue mission at first, and her voice is on full on screech mode.  Yet, when Brett breaks through her shell asking, "What if it was your man out there," there's a complete change in her demeanor, and her quiet command to Curtis carries much heavier feelings than goofy films of this type get credit for anywhere else but here, expressing love, concern and pride in his heroism: 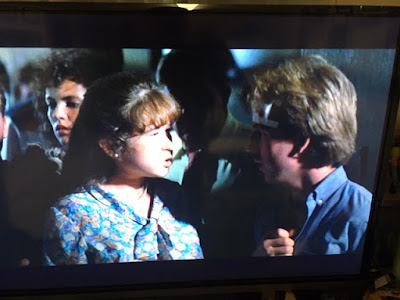 "Don't you make me a widow on my wedding day."


Back to the profanity now- for those who’d get a good chuckle hearing Lisa Simpson swear like a sailor, check out the supplied interview where she talks about some close call stunts, including “The fucking Cadillac” that came through the wall at her much faster than was promised. 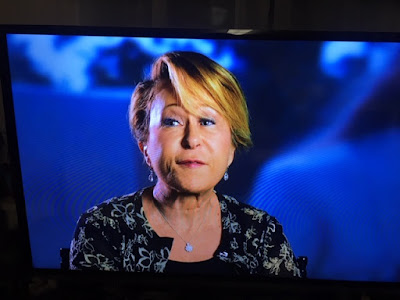 Comeback next week for the end of this year’s George Awards with another Bonus.