George Awards: That's the Trouble with Zombies, They're Unreliable! 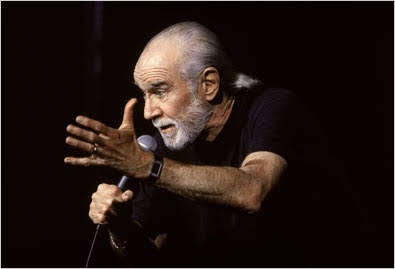 Welcome to a special event here at the end of the Sixth Annual George Awards. We’ve had a list and some special citations, but now it is time for a George Award first.

These awards were designed and strictly held to be for movies only.  Even with the advent of streaming and cable channel series, I have avoided celebrations of television shows…

That is, until now.

As a recognition of this, the 50th post in this ludicrous series, the first ever George Award for Awesome Profanity in a TV Series goes to: 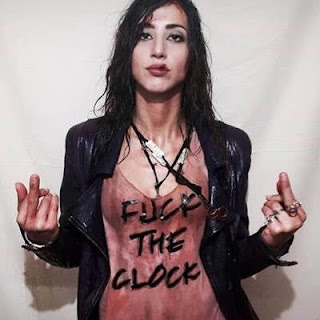 Dana DeLorenzo as Kelly Maxwell, in the
–amazing it ever got made but still far too short lived-
"Please Bring back Kelly, Pablo and Brandy in a Ghost Beaters show!"
TV series, Ash Vs. Evil Dead.

All the principals let loose tirades of profanity in this show, but there was just something fuckin' outstanding about when Kelly did.

Pablo, as the heart of the team, tended to have his profane outbursts in connection to emotional moments of fear and concern.

Brock was all about putting Ash in his place, and being awesome.

And Brandy evolved into a profane snarker like her dad.

She wielded every “fuck” as if it was the forced attack of a lethal weapon driving into its victim.

It all stemmed from Dana DeLorenzo’s epic delivery. Kelly was never sexualized or sensationalized,(when not possessed, which was a massive tell) she just kicked ass.

I said in the review of season three, but it bears repeating, there was something incredibly sweet and wholesome in the romance between Kelly and Pablo, surrounded though it was with gore and filth filled mayhem.  Turning the phrase "My powerful vagina" into a sweet term of endearment is another reason she nets this award.

It’s quite appropriate for the “classic action hero” role Kelly grew into, and the fact that Dana seems to have adopted the character’s third season greeting as her own: 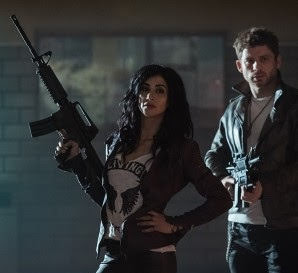 From Season 1 “Killer of Killers” as she used a deli slicer and meat tenderizer on a Deadite’s face in this explosive rant of release after going through a ton of shit as an introduction to the franchise: 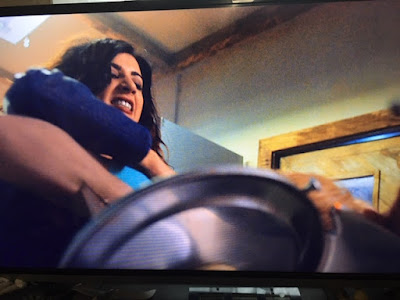 “I got this! Oh, shit! Thin sliced, just how I like it!
Oh, come on! Don't die on me yet! Not you.
You wanna fuck with me?
And my friends?
Come after my family?
You fuck!
Oh, I'm just getting started! I'm just warming the fuck up!
Fuck, yeah!” 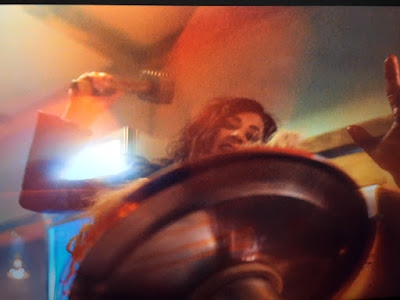 Or later that same season in “Fire in the Hole” as she calmly but powerfully discussed weapon selection: 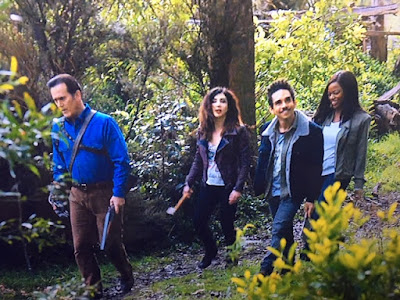 “I want a flamethrower. I'm serious!
I lost my parents, got possessed.
Flamethrower seems fair.”

A clean moment...until a bit later when she went the assault rifle route: 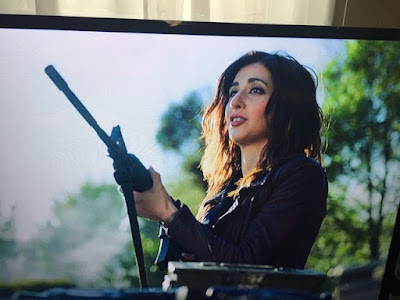 “Fuck a flamethrower,
this guy's got girth!” 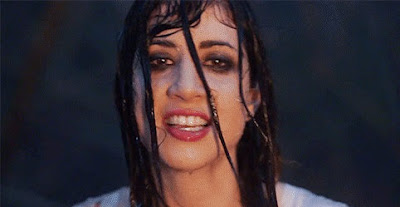 Her rant in the season finale while burning the cabin was epic as well, but kinda difficult to put into actual understandable written words.

She showed no signs of slowing down in Season 2. One series of examples is from the aptly named “Trapped Inside” when they were trapped inside the Williams house, surrounded by an angry group of locals. There were two cases where she let loose with a defiant scream, which could both be her greatest of many George Award Moments.  Both were accompanied by a spray of fire and a reaction afterwards that gave them even more awesomeness. 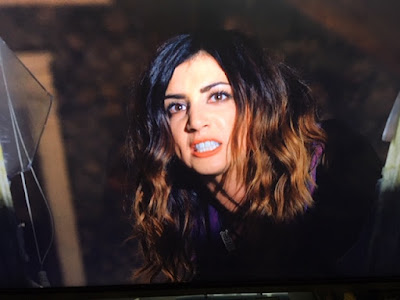 "You want Ash,
You fuckwads better know how to walk through lead!"

It's the little aside glace to Ash and new Linda afterwards that says, “Yes, that did indeed just occur” that sells it, accompanied by the matter of fact line: 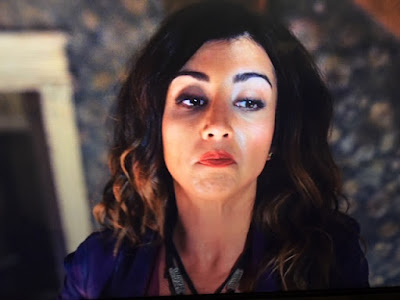 "OK, so, I fired a gun at a group of civilians"

It was shortly followed by an even more fantastically punctuated  tirade:. 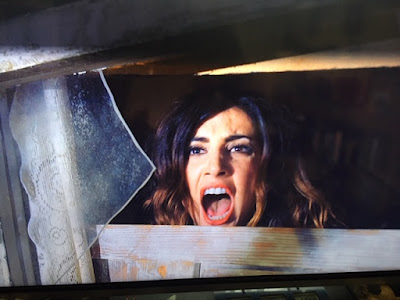 "Back off now or I will fuck!
your faces!
with bullets!"

This one was followed by the simple, yet still awesome question: 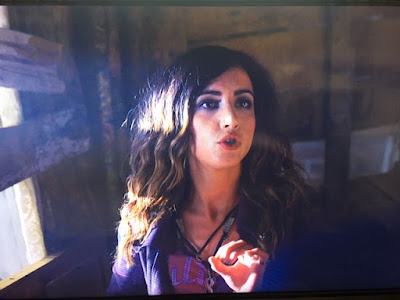 Those were such amazing scenes, I forgot about another George Awards moment shortly thereafter and stumbled upon it tracking down the wording for the above rants. It is when she leaves Linda on guard with the inspirational words:

Kelly- "We are eating a giant shit sandwich right now,
are you good down here for a minute
while I try to unfuck the situation?" 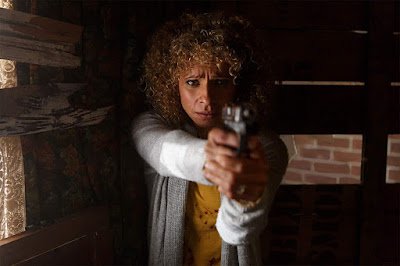 Later on in “Ashy Slashy” she lays this verbal smack down on the evil puppet.
Yes, it was totally that kind of show and I shall miss it. 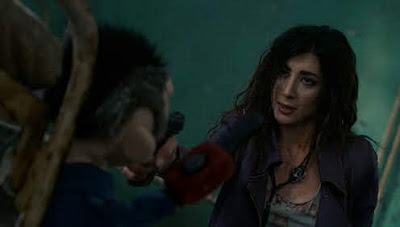 Season three gave us her greeting, and had many more weaponized fucks.  This one from “Baby Proof” stood out due to it summarizing her bond with her fellow Ghost Beater and not losing an iota of lethality due to its calmer delivery: 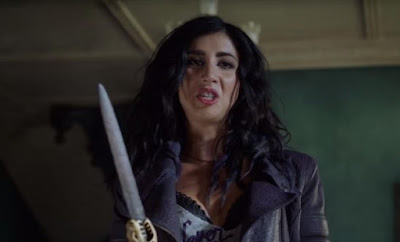 “Fuck with my Pablo,
fuck with me.
And I am done being fucked with, Ruby.”

I feel like the character was a little robbed by the series ending.  Killing Ruby should have been a moment of Kelly's arc.


Congratulations again to Dana DeLorenzo, for delivering “fuck”s so powerful, the medium of the George Awards required shifting for the first time in six years.

Thanx to all readers for coming along for the ride in another leg of this inane journey.

Holy Shit! She read it!

I've never fucking watched it but NOW I fucking HAVE to see the evil fucking puppet episode. Fuck.

If you liked the original Evil Dead films, you'll like the show. The amazing part is it ranges from the true horror of the first film to the goofiness of Army of Darkness, often in the same scene.