New Who Views- The Broadchurch Connection 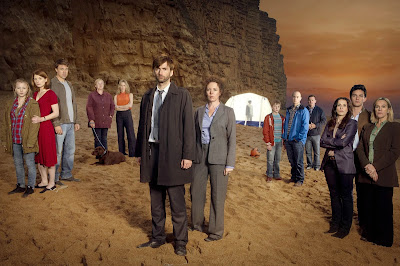 My wife watched Broadchurch when it was first on.  (She thinks she watched all of it, but isn't sure...this is common in our home, and keeps fun surprises in our lives.)
It's not my normal type of show but the cast looked interesting.  Anabelle watched it recently and talked about the huge Doctor Who crossover. She then let me know that it was leaving Netflix in less than a month and I needed to hurry so we could talk about it.
Being a responsible parent, I did...and it gave me a much better understanding of the current state of Doctor Who under Chris Chibnall.
Yes, I have complained about this version of Doctor Who.  However, I've also been enjoying it, and I still prefer it to any other series currently in production.
Watching Broadchurch, with it's season long story arcs, has provided some insights.
Oh, and Anabelle wasn't kidding about the Doctor Who cross over. In the opening ten minutes of episode one, there were three Doctors, Prisoner Zero, Rory, the voice of the Kerblam Man, and the guy who went all Crazy-Colonialist way back in Kinda with the Fifth Doctor.  It only increased from there.
Broadchurch seems like a mystery show, but it isn't really.  There are a great many clues and false leads, but there's no way the viewer could figure out what happened by what's presented in each season. 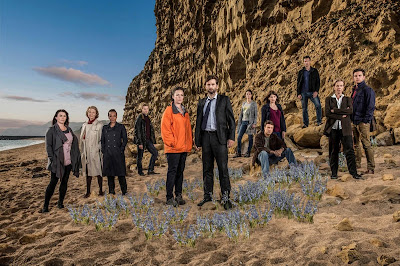 It's more of a police procedural, with abcourtroom drama in the second season so poorly researched that many British folks called friends in other countries to say, "No, our legal system does not work that way."
However, the real key to the show is that everyone … EVERYONE, in this quiet little town has some level (usually extremely dark) of deep secret.  It is the reactions of the characters to their own, and their friends' and family members' secrets, and the reveals of them to others, that drives the show.  This is true, even though sometimes the reasons for having or revealing the secrets mean the characters need to have momentary (or longer) attacks of idiocy.
The actors are all excellent and the reveals and reaction scenes are phenomenally played.  This is the main appeal of Broadchurch. In other words, individual moments are more important than the whole. I get the feeling this is also the driving idea behind Chibnal's Doctor Who.
As I said, the performers are all fantastic and are the draw of the show. Getting to see David Tennant to tear off in full on Scottish is always a joy to behold. Olivia Coleman as a fellow detective is the emotional core of the series.  Arthur Darvil as "Reverend Rory" (not his real name) is a rare example in fiction of a pastor who is actually a beneficial leader and counselor to his town.
I can easily see from Jodie Whittaker's performance as Beth how she was cast to be the Doctor. Beth is the kindest, strongest, and most compassionate character in the series.
There were many moments where Beth would get a phenomenal speech and I'd yell at the screen, "WHY DON' T YOU GIVE HER SPEECHES LIKE THAT AS THE DOCTOR?!?!"
She really is a fantastic choice for the role, and a brilliant ambassador for the series when interacting with the fans. I would have loved to see how other show runners would have used her. Maybe the 60th will be another multi-Doctor tale and we'll find out?
I've felt let down by the nature of many endings in this era of Who but having the individual moments be more important than the resolution, and having reactions to revelations of dark twists be more of the keys to the series than cut and dry victories has been a running thread.
Each season of Broadchurch is based around a horrible crime...
with the full reveal of the details of that crime showing that it was truly more horrible than originally believed. 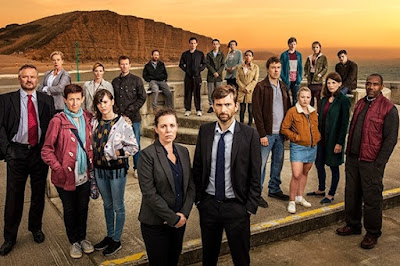 Honestly, the completely unrepentant culprit in the third season reminded me very much of the - most disturbing by far- Torchwood episode: Countrycide.
This reminder of when I watched Torchwood, brought back the memory of enjoying the experience, but not having a great desire to watch the whole thing again.
It was the same situation as with Broadchurch. I loved the characters, and all the moments with them were fantastic, but the resolutions felt secondary and generally unsatisfying.  However, there were stratifying individual moments mixed in those endings, for all three series.
It's true that I will much more readily watch the Classic, Davies and Moffat eras of Who again. However, I will rewatch this era of Doctor Who as well. So far, while confusing (in a good way) Flux  is my favorite Chibnall/ Whitaker season.
And now that I have a better understanding of the situation, I may try the rewatch of this era of Who sooner than originally planned.
Posted by Jeff McGinley at 11:00 AM

I don't have much experience with mysteries... but I just kind of took the experience as "let's guess who the killer is based on what the writers seem to be doing". So with Broadchurch a pattern seemed to develop with...if the person looks VERY guilty, they are most certainly not guilty. And whatever character seems innocent and incidental, they must be the guilty one.

We recently finished watching Mare of Easttown. That had a similar pattern.

With these shows, there are so many false leads...I end up having to work my brain to remember who ended up being the killer.

First season of Broadchurch...I remember easily. Second season...I have no idea. I'm not even sure what the crime was. Third season...took me a few moments to remember.

The "guilty person clearly didn't do it" was insanely prevalent in Broadchurch. It's easy to forget the second season because the horribly demonstrated trial was in the foreground.

Sounds like you had a similar experience. the parts (twists, false leads that expose other issues) were far more than the whole.