Christmas, it’s the Key to Our Evolution
Or
What’s the Matter With Mutants? That’s Where We Fit In

It’s that time of year.

But more importantly, time to dust off the stored action figures and HESS trucks. 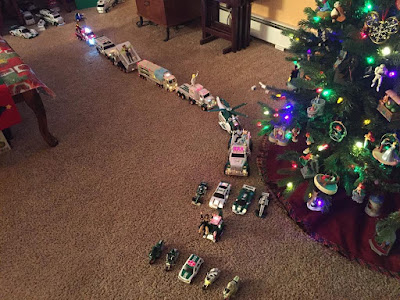 And what better way to start off the festivities than a parade provided by Anabelle: 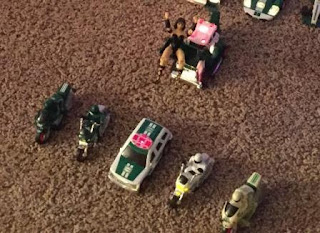 Some race cars follow because they're the wrong scale for anything else we do,
before the next float that normally carries one those off scale vehicles bearing guests from Alpha Flight, Snowbird and Northstar. 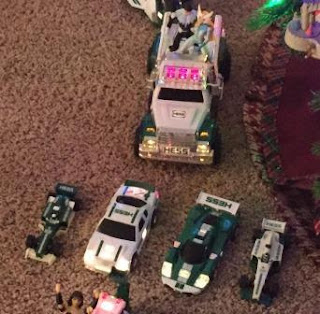 Not sure if our Canadian guests will be performing a song this year, but given who it is, you can bet it won’t be “Baby Its Cold Outside.”

Next up... the Helicopter! 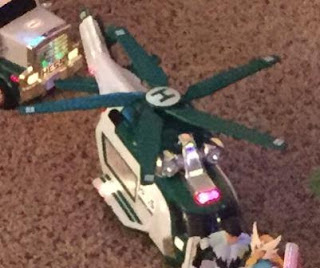 (Because I feel I need an inside joke that only the people I went to the UMASS Juggling festival with me back in college will get.)

On the following float, the appropriately named, but inappropriately dressed for the winter season, Emma Frost rides another car carrier. 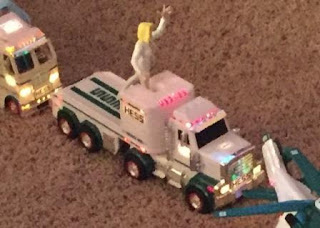 Behind her is Anabelle's favorite, the Tractor Trailer Float form the year she was born, that caught Snowbird’s fallen cape, and will gallantly carry it the length of the route. 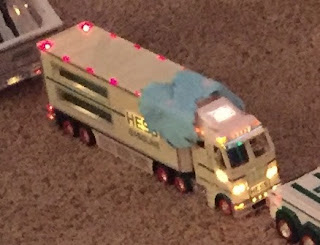 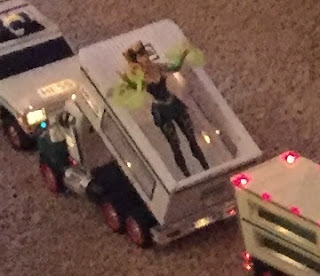 And now a brief break for the weather forecast:
Expect periods of excessive swearing as action figures fall with less walls to lean on in the village again this year...

Or more likely, more characters being knocked to the ground in battle to keep my blood pressure manageable.

As we come close to the end of the festivities, the SUV Float carries a tiny spaceship delivering cereal…for reasons only my daughter knows 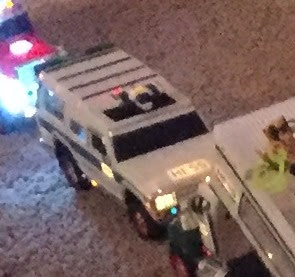 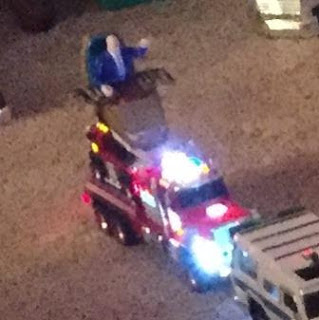 Sorry for the blurriness, it was a fast moving parade due to the imminent arrival of the post tree decoration vacuum cleaner.

Besides her HESS truck fun and traditional village, she’s also upped the firepower considerably on the Marvel Legends Shelf Christmas Special Combos from two years ago, with a little help from the Kaiju shelf that is between the X-men shelf and the villain shelf in the comic book room, due to my having more toys than I thought…or should have.  I feel the need to mention the patience of my wife at this point for some reason.

Going from Left to Right:

From The Year Without a Santa Claus- 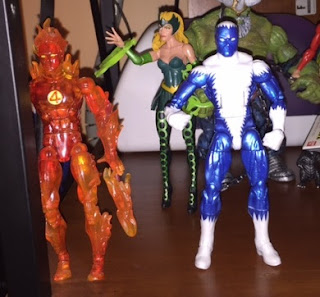 From Santa Claus is Coming To Town- 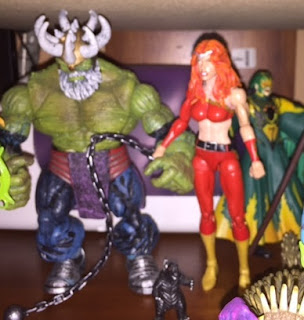 Maestro Claus (has beard and hat) and his bride Thunjessica. (Red hair, height compatible with Santa)
Along with Little Topper-Zilla (right size, peguinish shape)
And way in the back the Winter Mandarin (has robe and beard)

From Rudolph the Red Nosed Reindeer- 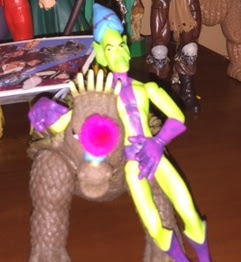 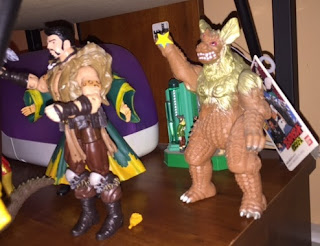 Behind them are Yukon Kravenillus (always HUNTING for silver and gold)
And King Bumbleseeser (big toothy smile) putting the star on the tree.

From Frosty the Snowman 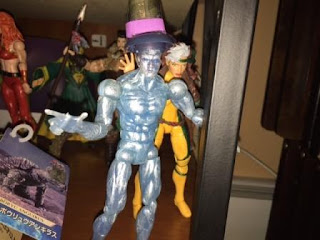 Frosty the Iceman (made of frozen water)
Being given his hat by Roguekaren, or Rogueholly from Frosty returns if I must admit that one exists
“Yes you must” – Anabelle
(Rogue’s female.  Yeah, we know she doesn’t match either color scheme,
But she’s new and well made, so she needs to stay upstairs for a bit.)

Comeback next week and click here for the annual village carnage!

I also got the baby it's cold outside joke. Because my high school comic nerd friend collected Alpha Flight. Also , that song be hella rapey if you listen closely

Yeah, even in a world of zombie snowmen and mutant reindeer, that's by far the creepiest of all Christmas songs. Given her power type and power levels, and his orientation, it ain't happening.

Thanx much for reading and posting Chris.