Based on the wonderful time in the waves, we planned on an early morning to insure a return to the ocean.

We did not plan on the Tropicana’s cutting edge technology in room darkening shades to destroy any hope of us awakening anything close to early after a day of extensive travel and swimming.

We poured some cereal and granola bars into ourselves and headed over to the outdoor pool to take advantage of the first time we had ever been in the hotel with the proper weather to use it.

Except we went into the tower with the indoor pool, which was not, contrary to our belief, the same tower as the outdoor pool.  We then took the elevator back down, crossed the casino to the other tower, and rode up to the outdoor pool.

I’m not naming the towers because I still don’t remember which is which, guaranteeing more fun next time we go.

Within thirty seconds we determined the pool and deck were far too crowded, and decided to go to the ocean.

Half way there, we decided that we wanted some pool time, and could go to the indoor pool since we already had noted its emptiness.

What we didn’t notice was its “kinda icky”ness.  Anabelle and I briefly swam while Rosa briefly did the other activity we can’t do without medical implications in February- rooftop tanning.

Then it was back to the room for a swimming location supply change, and down to the Atlantic again.

We left just about everything valuable in the room, but since we wanted to take pictures, that was kind of pointless because one of us always had to guard the phones.

During our tradeoffs, I learned why Anabelle was focused on leaving the first day. Sitting and playing together as the waves washed over their feet in a dazzling display of cuteness at the shore line the day before, my wife and daughter hatched a plan of Rosa using some saved up birthday money (since she NEVER updates her Amazon wish list…just sayin’) to stay beyond the two nights we’d originally planned, and have me go home to work Thursday and Friday, then come back to spend the first night of the weekend together and all return home Saturday.

While pondering the possibilities of executing this plan, we were congratulating ourselves as the sun beat down on us that we remembered power bars have a high enough chocolate content to make them a poor choice for a beach snack.

Then we stopped congratulating ourselves when we remembered Rosa didn’t eat all the chocolate in her selections from IT’SUGAR, leaving her with a Ziploc full of brown goo with the occasional gummi sombrero as an artistic highlight.

With rain due Thursday, and not wanting to sacrifice most of my last weekday with them configuring, hauling and storing luggage in the between rooms time, we decided the plan would work only if we could extend our original room to Thursday, and have them switch on the scheduled to be soggy day.  This way I could take some of the luggage home, and they could have a nice lunch together in the hotel with the fewer remaining bags during the expected foul weather and expected “homeless” period between rooms.

Rosa went in to the desk, and was told it would be easier to do the changes over the phone.

The future is weird sometimes.

She called and reached an awesome and sympathetic Trop employee.  Presenting her case as the marginally truthful, “My husband won’t let us stay without him unless we can change rooms Thursday,” the delightful desk dame replied, “Well then we’ll have to find you a room Thursday.”

Arrangements were made for a switch to the West Tower on that date, and Rosa rejoined us ocean side.

We took turns with Anabelle in the surf some more, Rosa teaching her to swim and body surf in the waves, and me teaching her how to get buffeted about randomly while blowing sand out of my nose as my fingers pruned beyond recognition. 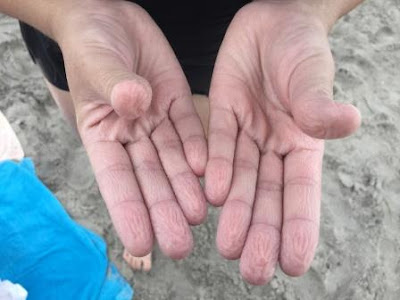 Anabelle had built a sand castle while Rosa was busy inside destroying my lessons about focusing on the now.  We dawdled around seaside for an extended period after we intended to leave as the waves mocked us by aaaaaaaaaaaaaaaaaaaaaalmost hitting the castle. 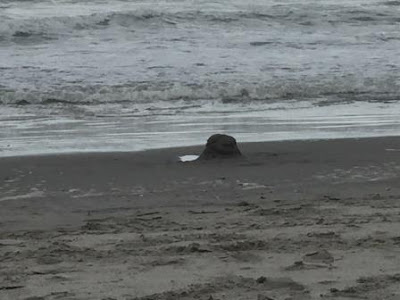 Naturally, while we were using the showers by the boardwalk to rinse the sand the Atlantic had power washed into most of our bodies, we caught the sliding back of a wave that could have pulled us into the Atlantic along with the castle.

It was late and we were past crazy hungry.

I should probably write a macro to access that sentence for every vacation I write about. 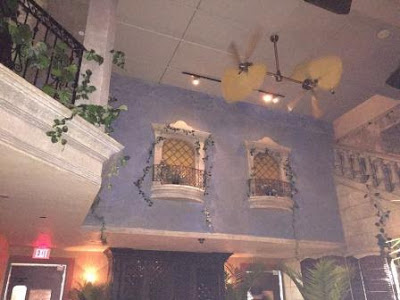 As a reward for the driving, and the going back to work while they continued to enjoy the sun and fun, they took me to Cuba Libre for dinner.

We had tried the place the very first time we stayed in the Tropicana.  I enjoyed my dish, but Anabelle was far too young for that type of food and hated everything, and Rosa didn’t enjoy the Cuban version of the Peruvian dish she ordered.

I think she was trying to order something Anabelle could eat too, instead of what she really wanted, and was flustered by having to bring Anabelle to the diner like Seaside Café for “dippin’ yellow” eggs before we even got the check.

Since that check came with a shot glass filled with whipped cream and a candle for our wedding anniversary, it was fairly awkward being alone at that table.

In all the confusion, I took their pen with me when I went to catch up with my family at the Seaside Café, and Anabelle was horrified by my new life of crime, demanding I bring it back while she shamed me the next day.

On multiple return visits I cited changing taste buds and the mass quantities of Latin food we eat everywhere else, but neither of them wanted to try again.  Plus, Anabelle was worried my being branded a “Pen Thief” would land me in trouble with the law should I deign to darken their doorway again. 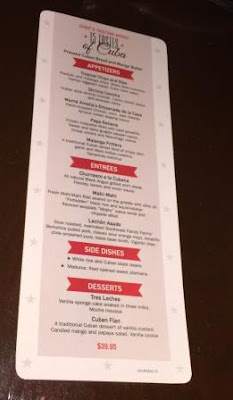 I ordered what I intended to years ago, the Fifteen Tastes of Cuba, figuring the multiple course sampler would have something everyone might like in it.  We didn’t really need it, because with the exception of one of the dessert items, everyone loved just about all of it. Anabelle even tried to get me to steal the pen again to guarantee a “next time” visit. 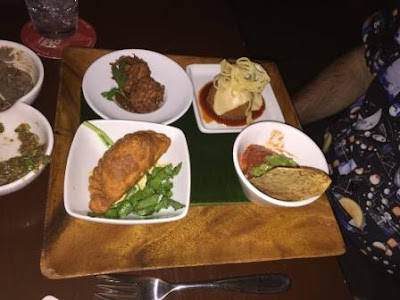 Woo! Daddy’s right about something on vacation. Mark the calendar!!!!

Full of Cuban delights, we decided to take advantage of the Boardwalk not being extremity damaging cold at night, and go for a little stroll.

As with most of our plans, it collapsed, and the littleness of the stroll expanded, bringing us further and further from home base.

Wearing their “nice dinner” shoes instead of their “strolling” shoes, this posed a painful issue for my wife and daughter.  Since my “nice dinner” shoes and my “strolling” shoes are both DC comics Chuck Taylors, and I had no treadmill or exercise bike with me, I volunteered to “Cardio Stroll” back to the room for their sneakers. Learning that we’d need a thirty year fixed financing plan to afford shore side flip flops added to this decision.

I got good work out going there, and once I grabbed my headphones with their sneakers, an even better one on the way back.

It was also an obstacle ridden work out, and I needed to whistle in a loud, electronic sounding warning type fashion to get the attention of the doofus who appeared to be trying to catch a Pokémon on my head. 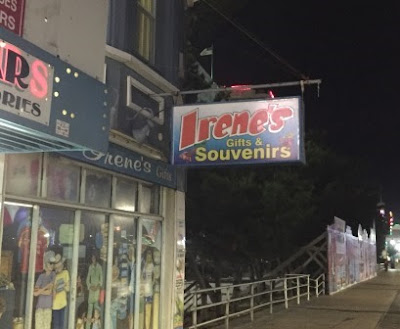 We rejoined, they changed shoes, and we continued to the strike filled Taj Mahal and closed Showboat.  By that point it was late enough to make taking the tram back the proper option.

The tram ride took a full half hour to pass the length of the Boardwalk, indicating it’s a heck of a lot further from one end to the other than we always think it is.

After my Power Jaunt, I noticed, oddly, that the tops of my feet hurt.  I wouldn’t discover why until the next day, since dead tiredness claimed us all before Rosa and I could begin discussions about whose turn it was to go down and play a slot machine.


Click here for the index.
Posted by Jeff McGinley at 2:00 PM