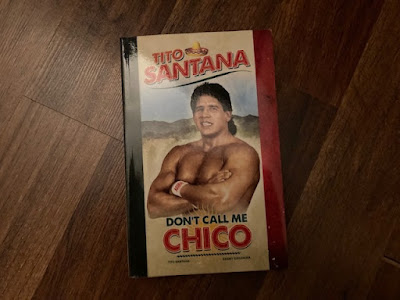 I have been meaning to write more about Professional Wrestling in multiple serieses(es) of posts covering books, video games and memorable moments.  Since, for me, all of those would begin with Tito Santana, I need to start here.
Based on his athletic, animated style in the ring, his exuberance in promos, and the fact that he’s one of the few performers who never had a heel run, Tito Santana was my favorite wrestler back in the day.
As a super-hero fan, that last one meant more to me as a youngster than it would now that I follow the performance and story quality.   Thinking back on it,  his in-ring storytelling was always outstanding. A heel run would have been gravely disappointing then, but he would have done a heck of a job and it probably would be a lot of fun to revisit now.
Ricky “the Dragon” Steamboat had similar appeal for me, but he had a shorter time in the WWF. I didn’t know about different promotions at the time, but I did notice some shows had much better (or at least more spectacular) production values.  I bring this up because one ring name he used before "Tito Santana" was "Richard Blood" - Ricky Steamboat's real name...because I love referencing pointless coincidences, and now thanks to the book pictured above, I know why.
The time of the WWFs rise to becoming THE nationwide promotion was my key wrestling watching years, and Tito Santana was there, with matches in the first nine WrestleMania shows.  Only Hulk Hogan can also say that.  (I'm couting the dark match before Wrestlmania IX.  See how pumped up the crowd is when the filmed part starts?  He did that.)
Tito Santana held the Intercontinental Title, the Tag Team Title as part of Strike Force and consistently put on fantastic matches.  There are good reasons he’s a 2004 inductee in the WWE Hall of Fame.
More important that those reasons are two direct encounters that are why all my other posts would have started with him.
The first happened Tuesday April 28, 2010 at 4:30PM. (Thank you old e-mails and photo time stamps.)  It was Anabelle's first "big girl" haircut at a place called Santana's.

We chose Santana's Styling Salon because my little girl was a fan of 1980's era wrestling, thanks to my set of DVDs, and the Legends of WrestleMania Video Game based in that era.  From watching those and listening to my periods of never shutting up about wrestling books I read, Tito Santana was also her favorite. The salon was (and is, which will be important later) owned by he and his wife, and we learned his “day at the desk” was Tuesdays.
Then and now, he teaches Spanish and coaches in the middle school nearby (which will also be important later) under his real name, Merced Solis.
Anabelle knew she was getting a haircut, but not where.
She was very excited when we got there and she saw what it was.
(As was I, but I tried to be an adult and not geek out too much).

Patti cut Anabelle's hair, and not only did a great job, by keeping her calm and happy the whole time, she also managed the much more difficult task of keeping Rosa calm and happy at the same time.

Rosa and I were really impressed by how nice Tito Santana was.  Part of that impression came from seeing how he dealt with other customers and community members while we were there. We saw him: sweeping up when he clearly didn’ t have to, helping a little old lady get set to leave and walking her out, as well as discussing town and school board issues with people stopping in.

However, what really drove it home was how he related to and talked to (and not DOWN TO) our daughter.
Anabelle was usually very skittish around new people, even people she'd been a fan of. (Her trying to hide under a seat at a Wiggles concert comes to mind.)
However, after being there a short while she went from not wanting to get her picture taken, to asking him herself to be in a photo with her.  She did insist I be in the picture too, for which I am grateful. He told her to "Make a fist like you're gonna attack someone!" 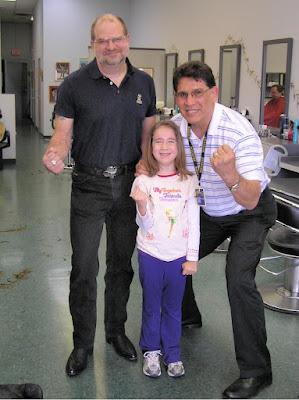 We could imagine how good of a teacher and father he was based on what we saw.

He was still in great shape (having an independent match later that night) and appeared every inch of his billed height.
It’s kind of rare that a celebrity looks as big as they look on screen.
I felt small, which was also unusual.

While Anabelle was getting her hair washed, Rosa and I were looking at the wrestling action figures behind the counter. He showed them to us and told us a new one was coming out. I asked him how cool it was to have action figures of himself and he said, "It’s pretty nice."

Anabelle told him she put a picture of him and Rick Martel (his old Strike Force tag team partner) on her "things I like" poster for school. He thanked her and told her he had just talked to Rick on the phone over the weekend. They had upcoming appearances in the Carolinas and Ireland together.
(Wait they're still really friends after Rick turned on him??? Says teen-aged me.)

As I said, I tried not to geek out too much, but did compliment him when Anabelle was in the chair, saying I remembered absolutely hating Rick Martel after he turned heel during their WrestleMania V match.  I explained how going back to watch matches as an adult, not only are the athletics impressive, but the ring storytelling was amazing.  He said that it used to be like that and I clarified I meant in his era.  Then I told him that having kids is like living with a tape recorder.  A few nights before I was flipping through the channels and found a current wrestling show.  Anabelle asked, "Is that the stinky wrestling Daddy." and I said, "Yes, yes it is".
He smiled.

Overall, it was a great first haircut experience for Anabelle-.  When we put her to bed and asked how her day was she replied,
"This was the best day in my entire life.”
She kept both the picture of them together and the signed photo she got that day hanging in her playroom, and they're still there.
(Yes, she was still too shy to tell him how to spell her name.) 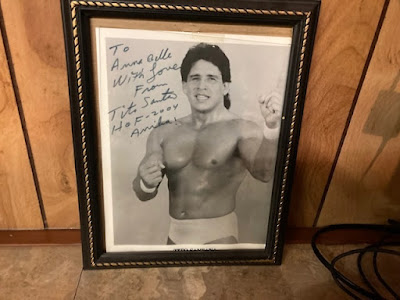 Thank you, I usually avoid putting photos of people in my posts. (Not sure why I started that way and it became tradition) but these needed to be there.

Seeing the photos in this post made me wish you had photos in the old posts....especially the Disney ones.

I started with not wanting pictures of the kids online, and kinda evolved into a style, where I sneak people in in the background or something. Maybe I'll change someday.