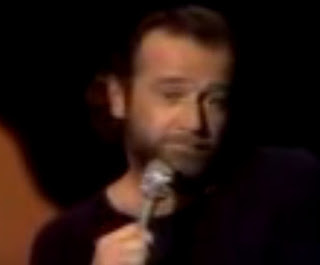 Continuing from Part One of this George Award List...

You can’t talk about 1974 Mel Brooks films without referencing Blazing Saddles from the same year.  Especially since Liam Dunn returned as Reverend.Johnson: “Son...You’re on your own.”

For Fifth Place, this movie has a couple.  The subtle stretching of Mongo (Alex Karras) when released from his jail cell and talking about “where choo choo go,” that has Sheriff Bart (Cleavon Little) covering his saddlebags.

Much less subtle is Madeline Kahn as the "Teutonic Titwillow" Lili von Shtupp answering an amorous fan and stage crasher’s request in a way he wasn’t expecting.

It's the way she gives him the come hither look and gentle shoulder grab first that really puts it “right there.”

Madeline Kahn is fantastic at George Award moments. Let’s face it, she’s responsible for a large percentage of the Mel Brooks sucesses that got him two lifetime achievements.

So how about another one for her, and Clue (1985) for George Award for Number Four.

She played Mrs. White internally reserved most of the time, and maintained that reserve when they discovered Lee Ving’s Mr. Boddy was the one blackmailing them. She calmly, nonchalantly, and without breaking stride, knees him right in the suspects while they all move as a group.  It's the only time in the film his calm and superior demeanor is broken, and the little applause by Eileen Brennan’s Mrs. Peacock adds to the moment. 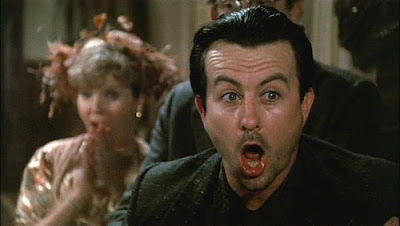 A bunch of them were wonderfully strange.

However, it was certainly a story with a complete victory.  All the heroes got their dreams, and all the villains paid for their actions.

The ultimate bad guy lost his TV station, and the support of the community, which was documented by the reporter (Fran Dresher as Pamela Finkelstein) and cameraman he and his son tried to push out of the business.

His son got knocked into a giant mud puddle by that cameraman- Noodles MacIntosh. (Yay Billy Barty!) 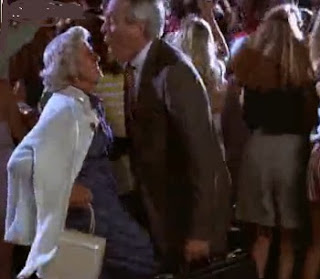 Second place, oddly, goes to Michael Keaton in 1989’s Batman. This heavily armored caped crusader was not the most mobile hero, using short bursts of speed coupled with gadgets and sneakiness.

When faced with a leaping, spinning martial artist with blades on his boots, the Dark Knight stood his ground, until the last second when he extended the Bat-nutcracker from his palm, felling his foe. 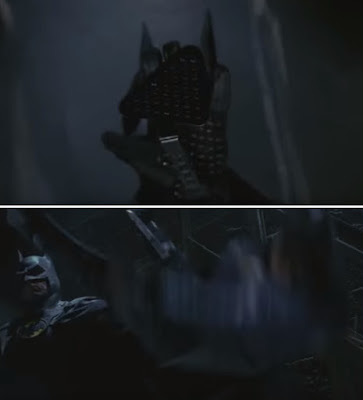 It places this highly for two reasons:
A- The fact that it completely comes out of nowhere.
B- More importantly, the fact that there are no readily apparent other uses for it.

That is: Batman designed this thing solely to hit an airborne attacker in his superstitious and cowardly lot.

And now, before finishing, we pause for a bonus George Award for a very good reason.  In 1985’s The Goonies one of the “booty traps” Data (Jonathan Ke Kwan) carries around with him, as his Pinchers of Peril pinch Francis Fratelli (Joe Pantoliano) right in his perils. 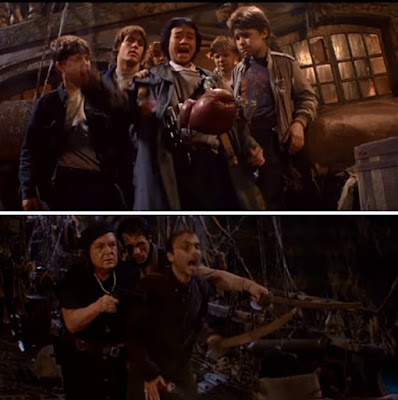 While that was marginally George Award worthy, it allows me to address an embarrassing miss from last year’s Dick Jokes list.  Right after Data runs through the Walsh house and Chunk (Jeff Cohen) thinks he’s saved the statue of David, only to have it fall off the table, the following occurs with the Walsh boys (Mikey- Sean “Samwise and Bob Newby” Astin) and Brandon (Josh “Thanos and Cable” Brolin).  The kicker comes, as always, from Corey Feldman’s Mouth. 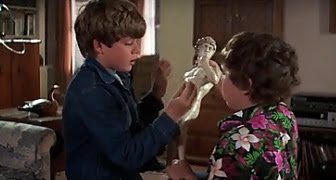 The Number one George Award in this category is kind of a cop out. (bwa ha ha!)

In all honesty it is partially for quantity over quality.

Rene Russo joined the franchise in Lethal Weapon 3 (1992), impressing audiences, and Riggs and Murtaugh with her incredible combat abilities.  When she takes out multiple foes simultaneously, the primary mode of attack for her character of Lorna Cole seemed to be violent punches, kicks and grabs to her opponents' internal affairs.

Bonus points for Riggs (Mel Gibson) getting in an entertaining comment to Murtaugh (Danny Glover) during one of her grappling attacks while he’s delighting in watching his lady in action. 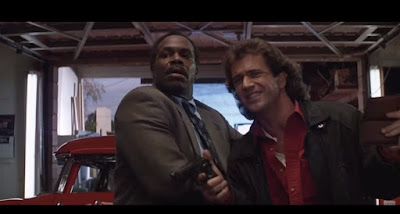 “Ooh! She grabbed his clusters!”

Since this franchise is overdue for a more extensive George Awards look (foreshadowing for future special citation perhaps…) it serves as a segue to next week.

The George Awards should be primarily verbal in nature.  While the topic will be the same, that’s the path the upcoming lists will follow.

Here's an example by our friend Martin Riggs again, commenting on taking up smoking again to combat his dog biscuit addiction:

“I've been chasing more cars lately,
and when I try to lick my balls, I keep falling off the couch.”

Come back later for more of that verbal thing in this year’s George Awards!