My thoughts on a couple of days I was home alone-
"I’ve got some stuff around the house that should be done,
I’m way behind in my reading,
got a lot of writing and editing to catch up on,
Or… 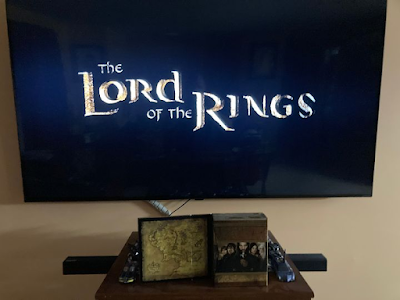 This began one night when it was time to exercise.  I had finished the "making of" extras on Soul. (Pixar always has extensive and insightful information)  I had not yet decided what to follow it up with and it led to the following mental conversation with myself:
Me- "Well there’s a big pile of new movies with behind the scenes I didn’t watch yet.  Which one shall I pick?”
*short pause*
The disc I actually picked-
“My dear Frodo, you asked me once if I had told you everything there was to know about my adventures. And while I can honestly say I've told you the truth, I may not have told you all of it. I am old, Frodo. I am not the same hobbit as I once was. It is time for you to know what really happened.”
Me- “Ahhhhh"
I had seen the Hobbit films more recently upstairs on the big TV, so viewing them again in hour long chunks while exercising was acceptable. However, it had been close to a decade since I watched the Rings films upstairs on the (now new and even bigger) big screen, with the sound bar, all the way through. This is when I made that decision as well.

Sure, they’re not as epic as the Lord of the Rings films, but the Hobbit movies do have their moments, from the intimate:
Like the fantastically shot and performed "Riddles in the dark,"
to bombastic magnificence:
Like the eagle’s attack during the flaming trees.
Also, I have gained new respect for Bilbo going on an adventure at age fifty.  At fifty-two I usually pull a muscle only bringing the empty garbage can up the driveway.

The book of The Hobbit is great, but as a huge fan of the films as well I have to ask the "They should have kept to the book" opinion group:
Would you have preferred a climactic end battle where the main character was unconscious and most of the details were glossed over?

Along with Hobbit films, Rosa and I also watched the animated Tolkien films together before I was alone.
The Rankin Bass cartoons, while simplified, are fantastic children's introductions to these stories. Also, like everything else they ever made, the songs are awesome and criminally catchy.  (And some have lyrics straight from the texts.)
The Bakshi film, covering the first book and a half, has beautiful and unusual art. The mix of pure animation, rotoscoping and color filters gives it a unique and stylized look. It works much better for scenes with individuals than huge battles, though.
In addition, I’m quite certain that the Orc war horns were kazoos.
With the preliminaries out of the way, I had a few new, or maybe not so new, thoughts as I enjoyed the extended edition Lord of the Rings masterpieces again.
There are a lot of manly tears in these films.  That's understandable when you know Tolkien was in the trenches of  World War One.
Knowing he was bitten by a spider as a child and almost died explains quite a bit as well.

In Fellowship of the Ring, based on his expression, I'm sure Elrond knew Sam was listening in at the council meeting. (Just like Gandalf also knew he was there then, and at the window of Bag End.)  However, when Merry and Pippin run in, Elrond is completely flabbergasted.  Actually, almost every other character is consistently surprised at what those two do. They're probably the X-factor that helped good triumph over evil.
There's likely something deeply wrong with me that I'm convinced when the awesomely impressive Argonath Statues are shown, the soundtrack should have switched to ,
"Stop, In The Name Of Love."

A common question is which of the three films does one think is best. And the common answer is "all of them."
Going by the first time seeing them in the theater, though, it was The Two Towers. The first was gorgeous and epic, and the third was outstanding. Yet, the second was the first time we saw the massive scale of what they could do, mixed in with emotional moments. The third was bigger, yet it built on what we'd seen in the second....
But, yeah, all of them.
At around Eleven at night during that second film, I started to nod off a bit. Then the Battle of Helm's Deep started and miraculously, I was wide awake again.

My original plan was to watch the more than four hour extended Return of the King over two nights.
This happened that morning:
First I fell back to sleep after my alarm.
It was only ten minutes but it panicked me.
Then, when I flushed the toilet I bumped the athletes foot cream off the counter.
It fell in and was gone before I could grab it. (Not that I didn't try.)
ick.
I washed my hands... a lot.
The toilet didn't act clogged at first but I was worried so I pored a bunch of buckets down.
Then I learned you have to hold the drain in the jacuzzi (that we never use but keep buckets in for power failures, and they sloshed over while I was filling them there) up for the water to go down.
I washed my hands a lot, again.
When I finally got outside, the recycling can top was filthy from rain and mud so I had to leave it out, and go back in from the garage to wash my hands a third time.
The bagel I had in my car to eat on the way to work in wasn't double wrapped like every other one I had gotten, making it stale and rock hard.
Somewhere between the mud and and the bagel, I decided I didn't have to exercise that night and I could watch the whole final movie.
Sam has so many awesome moments, but I think when he's running up the steps in Cirith Ungol and yells:
“That’s for Frodo, and that’s for the Shire, AND THATS FOR MY OLD GAFFER!”
That's the point where Sam is letting Mordor know he is finally and truly done with their crap.

Pippin building up Faramir:  More proof that he and Merry are key to this whole thing.  Merry is essential with his assist on the Witch King being taken out, and Pippin almost does, and then really does set himself on fire to save the day at two points in this film.
Like Gandalf said, “A fool, but an honest fool”
Syllogism time:
Dolores Umbridge is the Denethor of Hogwarts.
They're far less evil than the main villain but they're so petty and cruel for selfish reasons that they're easier to hate more.
Kai Winn from Deep Space Nine falls squarely in this category as well.
It’s a very dark scene, and part of a succession of the lowest points for everyone, but great gravy it’s EXTREMELY cathartic watching Sam punch the living snot out of Gollum.
The Sub woofer really kicks in for the oiliphants.  WOO!
Glad I decided to watch these upstairs... again!
Something I never noticed in these movies before:
In his Orc armor disguise, Sam still has MULTIPLE frying pans hanging off his belt, gotta love that hopefulness.
Hey, the ring is gone…
and there's still forty-five minutes of movie left.
Which keeps my interest one hundred percent.
That was fun.
Dang these are good.
I could totally start watching them again tomorrow, easily.
Posted by Jeff McGinley at 11:00 AM

Every time I hear or see the word oiliphant I burst into laughter. No exceptions.

As well you should.
Thanx for playing.
Love
Daddy

Your reviews of these movies always make it sound like something I want to wat now and will really enjoy, even though, as you know, "I don't give a crap about Frodo or his stupid ring"

Thank you. Just ignore Frodo and his stupid ring, there's enough other stuff going on!