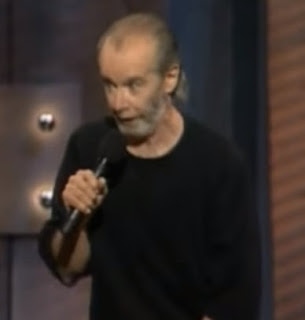 Hello again, and welcome to this year’s George Awards verbal list following the visual impact part.  This one is a little odd, not a straight top ten, since there are multiple versions of referring to this anatomical injury fest.

We’ll start with the most harmless of descriptive words, and a couple more “cross overs.”

Might as well get Mel Brooks on the list quickly. It's the delivery and reaction of this scene in 1981’s multiple George Award winner History of the World Part I that makes it memorable.  Mel as Comicus, having realized he’s using prop weapons against Roman General Marcus Vindictus (Shecky Greene) changes tactics: 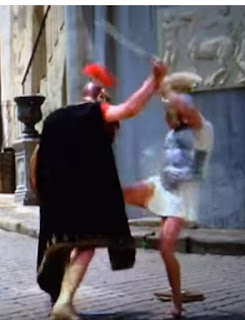 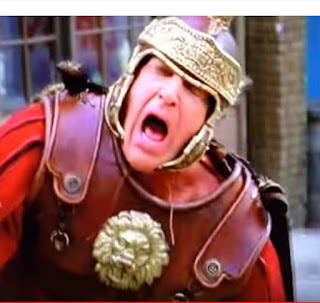 The Adventures of Buckaroo Banzai Across the 8th Dimension (1984) does have a nice visual when Peter Weller’s Buckaroo kicks John O’Connor (Vincent Schiavelli) in the Lectroids to escape the pod crash site. 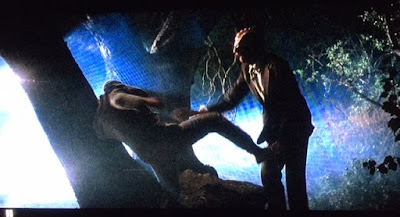 However, this family favorite is also one of my favorite films to quote, and needs to be on the verbal list. The George Award goes to the bizarre presidential hospital scene, for being a stand out weird moment in a film that pegs the weird-o-meter for most of its duration.  Here’s William Traylor as General Catburd, Mariclare Costello as Senator Cunningham, and Ronald Lacy as President Widmark: 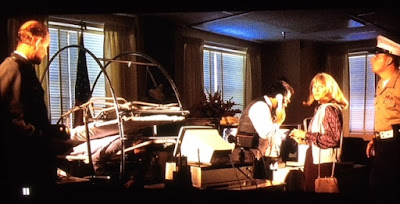 General- “Mr. President, I am a soldier. And I'm a damn good one. I've got enough decorations to snap a Christmas tree. All I'm trying to say is…
and I hope I speak for everyone in this room…
is that I am scared.
I'm barely holding my fudge, right now.”
Senator- *dripping with derision*
“Stop acting like a goddamn schoolgirl,
General, and pull yourself together.”

President- “I'm glad SOMEONE has the BALLS to face facts!”

Monty Python needs to be on these lists more often. To remedy that, here’s a great moment from the first "R" rated film I saw in a theater (Thanx Dad!) 1983’s Monty Python's The Meaning of Life.

John Cleese tears into folks on both sides of the Atlantic with these tirades.  It's the little grabby hand motion that sells the final word.

Mr. Grim (here about the reaping)- “Shut up! Shut up,
youuuu American.
You always talk, you Americans…
You talk and you talk and say
'Let me tell you something'
and 'I just wanna say this.'
Well, you're dead now,
so shut up!”
… 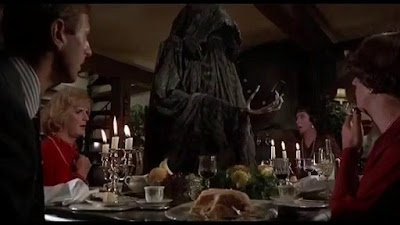 “Be quiet! You Englishmen!
You're all so fucking pompous. None of you have got any balls!”

Hey! Let’s give John Cleese another one, for his fantastic deadpan delivery as the Centurion in 1979’s Life of Brian. The film is an amazing documentary of the splintering of religious groups in western civilization…maybe.

The entire scene where he chastises Graham Chapman as Brian Cohen for his Latin skills was based on Cleese’s time as a teacher.

The initial a sword edged, threat filled, grammar lesson was hysterical enough.
The ending note, added almost as an afterthought, was a perfectly executed finish:

Centurion- “Now write it out a 'undred times.”
Brian- “Yes sir, thank you sir, Hail Caesar sir.”
Centurion- “Hail Caesar.
If it's not done by sunrise...
I'll cut your balls off.”

At some point, I’ll have to do a deep dive into the Predator franchise, but for now handing another George Award to 1990’s Predator 2 will have to suffice.  While the original has been disqualified for similar quality volume reasons as Robocop, the sequel has a few stand out moments.  It’s important to acknowledge the film that brought, 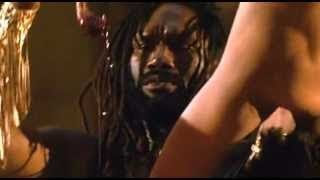 into our lexicography…even though the “Voodoo” part came from the studio thinking audiences were too stupid to know what Rastafarian was for King Willie’s Jamaican gang.

This spot is another cross over, with a delayed payoff.

Detective Leona Cantrell, played by Maria Conchita Alonso greets overly enthusiastic Detective Jerry Lambert, played by Bill Paxton, and informs him in no uncertain terms that his cavalier ways will not be accepted.  Detective Danny Archuleta, played by Ruben Blades, has a nice capstone response: 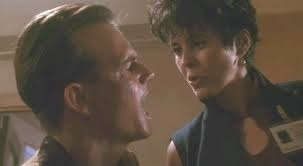 Cantrell: “You try that cowboy shit with me, fucker...”
*Grabs him by the specialties*
“...you can kiss these goodbye.
Got it?”
Lambert: “Yeah, I got it.”
Archuleta: “Well, well, I see that the three of you have met.
Lambert, if you're feeling up to it why don't you limp your way in to the lieutenant.
He wants to talk to you.”

The scene transition pays off nicely as Cantrell chases Archuleta off, Lambert goes in to meet Lieutenant Harrigan (Danny Glover) to get “the speech” in an island of well-acted drama amidst the chaos. 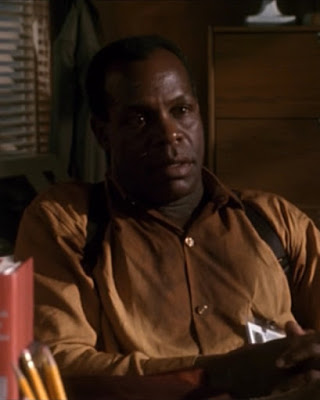 The excellently executed call back is the reason it’s on this part of the list, when the two detectives pass each other on the dance floor of a police frequented bar:
Cantrell- “Hey, are your balls OK?”
Lambert- “Fine…How are yours?”


Here's one I never expected.  When I first heard that Casino Royale was being adapted into a "faithful to the source" movie in 2006, my first thought was, "There's no way they're doing the carpet beater torture scene."

Not only did they do it, but Daniel Craig cemented his worthiness to be Mr. Bond by managing to utter a hysterical George Award moment, and a truly chilling, threatening boast in response to Le Chiffre (Mads Mikkelsen) repeatedly smacking his double "0"s. 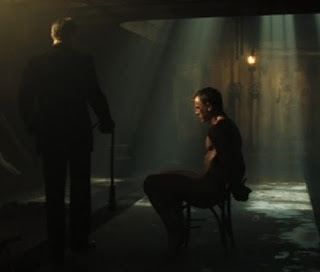 James Bond- *Screams*”No! No! No! No...to the right, to the right, to the right!”
Le Chiffre- “You are a funny man, Mr. Bond.”
James Bond- *Screams More* “Yes, yes, yes!
*Laughs like a dangerous lunatic*
“Now the whole world is going to know that you died scratching my balls!”
Le Chiffre- “I died? I died?”
James Bond- “Yes, because no matter what you do,
I'm not going to give you the password,
which means your clients are going to hunt you down
and cut you into little pieces of meat while you're still breathing!


Because if you kill me, there'll be nowhere left to hide.”

To top off this section, it’s all about the delivery.  Bachelor Party is a semi-typical sex comedy from 1984.  The "semi" is because it stands out from the festering pile of similar movies in that decade for two reasons.
1) It stars Tom Hanks as Rick, the groom to be.
2) A large percentage of the jokes are intentionally humorous.

Gary Grossman, as Gary, is perpetually put on and shoved though the ringer throughout the story. His reactions create many moments of comedy gold.  The applicable one this time,  comes from his utter shock and horror, yet total acceptance of the terms he just agreed to for getting the hired ladies of and for the evening back on time: 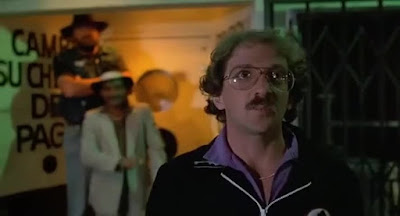 “I just bet my balls and shook on it.”

These anatomical bits under analysis for this round of awards have a distinction that the clinical term is often funnier than the slang.  The next three entries will show that.

It looks like this is a lucky year for John Cleese. His French Taunter in Monty Python and the Holy Grail (1975) is one of the most quoted sections of an infinitely over quoted movie.  There’s something almost musical in his poetic delivery of the final taunt:

“Yes, depart a lot at this time and cut the approaching any more,
or we fire arrows at the tops of your heads
and make castanets out of your testicles already!
Ha ha haaa ha!" 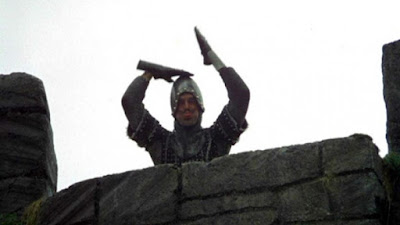 Remaining in 1975, is a me favorite film that hasn't been mentioned in a while The Adventure of Sherlock Holmes' Smarter Brother …and what a surprise, Madeline Kahn is in it.

However, this comes from the introductory exchange between Gene Wilder and Marty Feldman.  As Sigerson Holmes (Wilder) is about to slam the door on his visitor for being sent by his brother “SHEER LUCK,” Orville (Feldman)  saves himself at the last moment by referring to an old, anatomically named case: 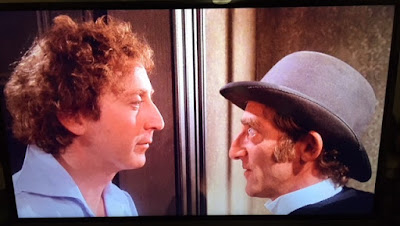 Orville- “May I say I’ve been a great admirer of you for many years,
especially your handling of the case of the three testicles.”
Sigerson- “You’ve studied the three testicles”
Orville- “Orville Stanley Sacker at your service,
Sergeant, records bureau, Scotland Yard.”
Sigerson- *thoughtful pause*
“Come in Orville I was just making tea.”

In a similar…um…vein, is the scene from In & Out (1997) also coincidentally not featuring the multiple George Award winner in that film, Kevin Kline.  Instead this exchange of “getting things out in the open" is between Debbie Reynolds as Bernice Brackett and the other feisty women of Greenleaf, Indiana after the wedding goes south.

I’ll be honest, I don't own this movie, couldn’t find a proper script on line, didn't bother to find the right picture and I'm not sure of the character or actor names. 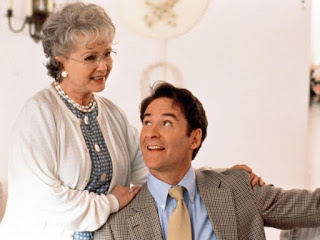 Apologies to the two to three people left who hadn’t figured out that these awards are filler to give me time me write the posts with more substance.


To apologize for that decidedly half-assed entry, allow me to present a rare and wonderful Special George Award, for a reference in this category, to a television show. 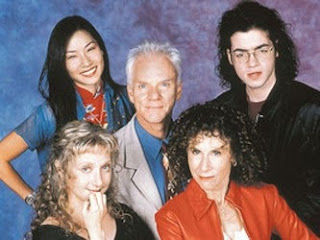 It had an amazing cast, fantastic guest stars, was well written, intelligent and funny.

Of course it only lasted one season.

Much of the funny came from Pearl's brilliantly ditzy sister-in-law Annie, portrayed by me favorite movie Transylvania 6-5000, and Pandemonium star Carol Kane.

Yes, "Me Favorite Movie" is a thing now.

It was Annie who delivered a line so wonderfully goofy that it deserves to break the movie only boundaries of the George Awards:


"He was sterile on account of an accordion accident...
Doctor said if he played the cymbals,
he woulda DIED!"

Comeback next time for one more euphemisms, the top in each word group, and the grand prize winner!!!