Dana Awards: If Something Seems Too Good To Be True It Probably Is 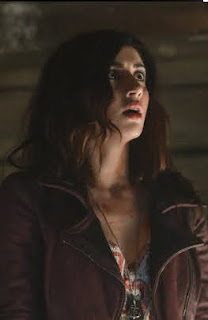 Warning
This post contains bad, foul, filthy and unacceptable language - the words that “will curve your spine, grow hair on your hands and maybe, even bring us, God help us, peace without honor.”
This is not a post for children.  Kids, take a hike.
This is also not a post for those adults who are offended by this type of language.  Do yourself a favor, and go read some of my cute stuff before moral outrage can kick in.
Just about everything else on this blog is clean…Stupid sometimes, but clean.
End of Warning.
The next entry of this year's  George Awards is the annual Dana Award for Profanity in Television.
The award is an overall achievement to Chris Chibnall's Broadchurch.
Given the horrible crap that befalls most of the characters throughout these mystery misery tales, near constant swearing was to be expected.
The fact that the obvious person was never the guilty one led to a ridiculous amount of false accusations.  Outside of the stress incorrect blame placing caused, other terrible secrets would usually rise to the surface, upping the ante of "Oh shit!" moments.
While the general cursing throughout the series was outstanding, three moments that stand out above and beyond the rest as Dana Award Worthy will be highlighted.
Coincidentally (or probably not since it's me) one per season.
For Season One, it goes to Beth's confrontation of Becca, the woman who slept with her husband the night her son was murdered. (What a cheery fucking show, eh?)
Honestly, the amazing and powerful speeches Chris Chibnall gave Jodie Whittaker as Beth Latimer (the character in the show with the most internal strength) makes me wish they let the Doctor swear during his Doctor Who run. She would have been amazing.
While in the process of destroying the bar in the hotel Becca owns, Beth lays this verbal beat down on her: 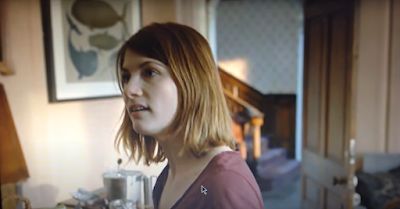 Beth- *breaking glasses, and throwing snacks *
“I'm doing your windows next."
*Jerky woman tries asks her to stop*
*Beth Moves on to opening beer taps*
Beth- “I've got five flavours to get through.”
*Jerky woman says it was wrong*
Beth- “Too right it was.
My husband!
Cos I will nail you to the floor before I let you wreck fifteeen years of my life!”
*Jerky woman apologizes based on not knowing about murdered son*
Beth- *full, fierce, cold stop*
"Don't you dare.
Don't you dare bring that into it.
Come near my family again
and I'll break your fucking face.”
For Olivia Coleman as D.S. Ellie Miller, in all seriousness she deserves a Dana award per episode.
This is the woman who said:

"With all due respect.
Sir, move away from me now
or I will piss in a cup and throw it at you."
But since season two needs representation, and we already awarded Beth for Season One, Ellie gets it for her dressing down of her worthless, cowardly, criminal ex-husband.  Beth's speech was awesome too though, therefore I'm putting it here as well.
Tough shit, these are my awards.
Damn it! There's no picture for this one online, and Netflix dropped the series.
Well, fuck.
Beth- “Don't open your mouth.
You don't get to speak.
You could've kept...
one bit of your humanity.
You could've faced up to what you've done...
taken your punishment.
Been a decent human being.
What...
What am I saying?
You're not that.
You can't ever have been.
When you die...
NO-ONE will mourn for you.
We could kill you in here, dump your body on a beach.
And no-one'd care.
No-one'd notice.
But we're more than you.
We...
I
will not be broken by this.
We all get to live.
But you... you've no life left.
Not here.”
*Worthless ass protests*
Ellie- “SHUT UP! JUST SHUT UP!
You piece of shit!”
*Worthless ass apologizes*
Ellie- “You're not sorry!
If you were sorry, you'd have pleaded guilty.
You heard what she said. You are leaving.
You are never coming back.
And you will never see either of your children again.
*More worthless assness*
Ellie- “Oh, I can do that.
If you try and see them, if you follow them, if you go to their schools,
if you contact them in any way,
I will kill you.
And unlike you, I will face the consequences.
You are dead to us.
Do you understand?”
David Tennant, when away from his congenial Doctorness has proven easily George Award and Dana Award worthy.  His beleaguered character of D.I.  Alec Hardy was no exception. While excellently profane throughout, his true Broadchurch Dana Award moment comes at the penultimate episode of Season Three, when he fully accepts the responsibilities of being a father. As a Dad, I truly appreciated the brief and pointed discussion he had with the boys who had made his little girl's life hell. 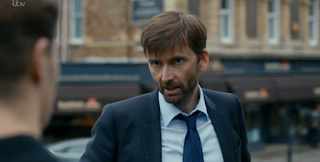 *Asshole boys panic*
Alec- “Shut up!
Enjoying yourself, boys?
Get up! Stand up!
Who of you shared the photos of my daughter around the school?”
*Asshole boys feign ignorance*
Alec – “Oh, aye, you do.
You boys,
you wee babies, that think they're men.
You hurt my girl.
So from now on I am gonna be watching everything you do.
I'm gonna be watching everything your parents do,
everything your family does.
If any one of you even so much as belch when you shouldn't,
I will be there.”
*Asshole boys accuse him of threatening*
Alec- “No, son, I'm instructing you.
Do you know what I do in my job?
Do you?
I deal with murderers,
and brutal thugs, and sex offenders.
And I win.
I get the better of them.
So don't for a SECOND imagine I will break a sweat getting you in line.
Any of you come near,
in fact, you even talk to
no,
no,
you even talk ABOUT my daughter ever again
let alone do anything to make her unhappy,
I will find you, and I will cut your tiny little cocks off.
*Asshole boys protest pointing out he’s the police*
Alec- “I'm a father.
And I will do whatever is necessary to protect my daughter.
Right, piss off!”
And yes I intentionally left off the names and direct quotes of those who harmed all of the Dana Award Winners to give a stronger voice to the victims...
And it felt fucking great.
Come  back next week for a rare Real World George Award!
(Rare, because it is not me or someone I'm related to this time.)
Posted by Jeff McGinley at 11:00 AM

This post made ME want to swear, remembering season 2 and that super shitty guy putting everyone through that trial.

And when I say makes me want to swear, I don't mean that I'm going from not swearing to swearing. It's more like having an increase of behavior I'm already having.

I know that behavior well. There's a reason I've been able to keep these awards up for nine years.

Glad you enjoyed it and thanx for sharing.